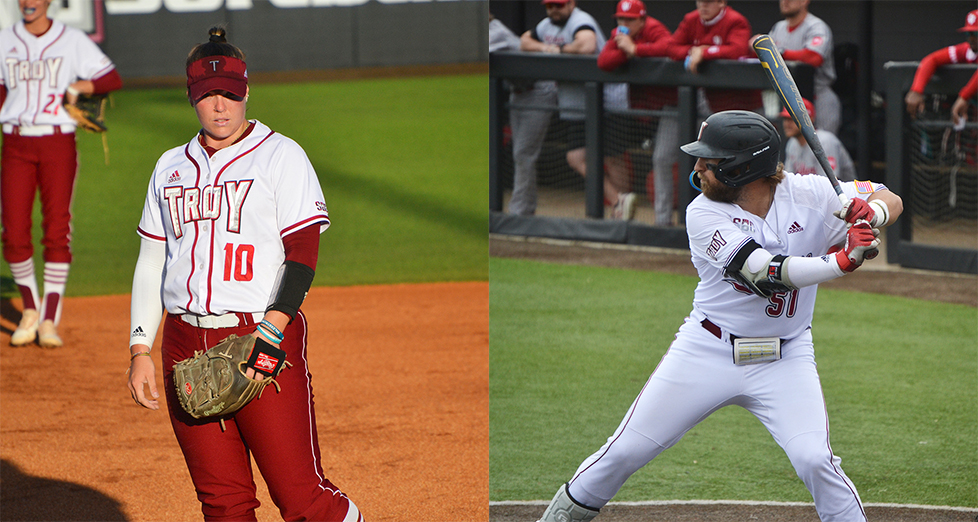 Leanna Johnson (10) and Easton Kirk (51) will lead their teams in series matchups this weekend. (Photos by Josh Boutwell)

Both the Troy Trojans baseball and softball teams will duke it out in a pair of Sun Belt Conference series this weekend.

The baseball team (25-14, 10-8) will look to carry the momentum over from a midweek win over Georgia Tech into its home series with Georgia State. Troy and Georgia State are currently tied for fifth place in the Sun Belt and a series win will help either team as the Sun Belt Tournament draws closer and closer.

Troy holds the edge in the all-time series between the two schools 37-15 and holds a 20-4 home record against the Panthers. Both Jesse Hall and Easton Kirk are in the midst of career-highs in consecutive games reaching base as Hall has reached base in 13 straight games and Kirk has done so in 14 straight games. Rigsby Mosley, Garrett Gainous and Brady Fuller are set to earn starts on the mound this weekend, as well.

The Trojan softball team (27-15, 13-8) will hit the road this weekend for a pivotal conference series against Texas State as both teams are currently tied for third place in the Sun Belt.

Coming off yet another no-hitter, Brantley native Leanna Johnson will get the start in the circle on Friday. Johnson currently leads the Sun Belt in ERA (1.90), strikeouts (226) and starts (29). Her strikeout total is also tied for 13th in the entire country and her total shutouts is also tied for fifth in the country.

Troy’s Kelly Horne comes into this series with a .385 batting average and a team-leading 10 home runs. Her home run total is also tied for third in the conference, while her on base percentage (.576) is first, her slugging percentage (.750) is first, her total walks (42) are first and her batting average (.385) is fourth in the Sun Belt. She has also set the Troy record for walks in a career this season, as well.

The Friday game begins at 6 p.m., Saturday starts at 2 p.m. and Sunday begins at noon. The Saturday and Sunday games will stream on ESPN+.