The Brundidge Police Department has charged a man in an early morning robbery last week. 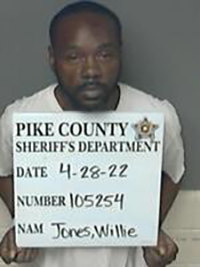 According to Brundidge Police Chief Sam Green, Willie Mitchell Jones, 43, of Louisville, has been charged with two counts of first-degree robbery and resisting arrest. Green said Jones has a Louisville address, but had been living in Brundidge for about the last two years.

Green said about 1:30 a.m. on April 22, a man entered a business in the 7000 block of U.S. Highway 231, approached the counter and pointed a small, black handgun at the cashier. Green said the man demanded money, then stepped behind the counter and took the money from the register. After taking the money, Green said the man escorted the cashier to a backroom and took more money from that room.

Green said Jones had been transferred to the Pike County Jail.