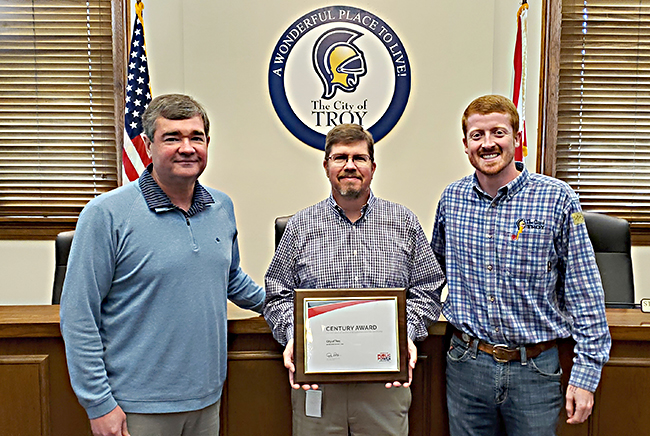 The City of Troy has been recognized by the American Public Power Association as having one of the oldest electrical systems in the nation.

City of Troy General Manager of Utilities Brian Chandler said the utilities department had been recognized with an APPA Century Award – an honor that is only given to public power providers with more than 100 years of service.

“After we became a member of the American Public Power Association, I read an article about the Century Award,” Chandler said. “I remembered what Mr. Homer [Reeves], former utilities director] had told me. He told me Troy had electricity for more than 100 years, that really stood out to me – that the department had served the citizens of Troy for that many years.”

Chandler said one of the requirements for the Century Award was documentation of the history of a city’s electrical department. He said Avery Zubaly, an intern for the city’s utilities department, researched the city’s electrical history at the Troy Public Library. He said much of the information documented was taken from the archives of The Messenger.

While Troy wasn’t the first city in the nation with electric streetlight, the city was illuminated shortly after the first street lights flickered on.

“From the research, we know exactly when and what time the electricity came on,” Chandler said. “It was May 7, 1891, at 8:10 p.m. and Charles Henderson’s wife flipped the switch. At the time, Troy was one of the few electric systems in the nation, not just Alabama.”

The original building for the power plant was constructed at the corner of East College Avenue and North Oak Streets. The building was brick and the M.&G. Railroad extended its track to deliver material to the building.

“It’s remarkable that the utilities department has been delivering electricity for 131 years,” Chandler said. “That predates Alabama Power by about 30 years and the state co-ops by about 40 years.”

Troy Mayor Jason Reeves said the decision to decision to create an electric company shows the vision people of the city had at the time.

Chandler said the city’s utilities department currently has about 9,500 to 9,600 customers.