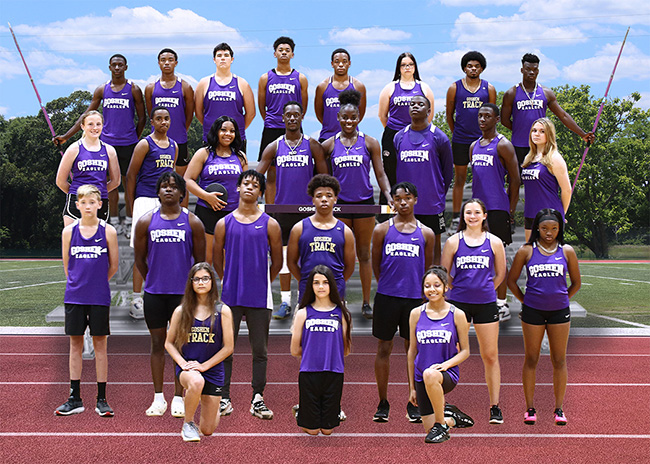 Goshen High School Eagles Track Team Coach Darius Davis is extremely proud of the way his team has performed throughout what he calls “a great year.”

Also, this year the students at Goshen High broke more than eight school records and expectations are high for the future of track at GHS.

•Kyandra Cummings broke the school’s 200m record, while recording a time of 28.96.

•Senior D’Aveyon Cowart broke the school record when she threw the Javelin 74-9 feet.

•Jamari Mclure who broke the 110m hurdle record with a time of 18.00 at the Spain Park Classic.

•Jabari Williams had a time of 50.49 seconds at the Wetumpka Speed Meet.

•Leon Cowart broke the Discus record with a throw of 95-9 at the Wetumpka Speed Meet and the record for Javelin while recording 88-8 throw.

“This year our students have excelled on the track field and in the classroom,” Davis said. “From last year to this year, the Goshen Eagles Track Team has grown from 12 members to 25 members and many of these students are two- and three- sport athletes.”

This year’s track team has students who competed in multiple events.

“There are only four seniors on this year’s team,” Davis said.  “Most of the team members are freshmen and sophomores.  We have several seventh and eighth graders competing at top levels. “

“In the 100m, Jabari Mclure and Szmerick Andrews posted times of 11.55 and 11.51, which are among the top ten in 3A. In the 200m, Kadavion Bristow posted a top time of 23.1, that Coach Davis of the Goshen track and field team has consistently been in the top five along with Jamari Mclure’s time of 23.4. “

Davis said the GHS Track athletes love competition, and have fun at practice.

“They love to come to practice and compete with each other,” the coach said.  “We have sectionals coming up this Friday, and I believe our students will do really well. We set goals for ourselves every week and reach them. The most important thing is that our students really enjoy the sport and are really excited about our upcoming match on Friday.  We want to thank the parents and the community for their support and encouragement throughout the year.”