Monday marked the start of Troy Parks and Recreation’s Spring Tennis League with more than 80 children, adults and senior citizens competing in the league.

Back in the fall, it was suggested that the city form a tennis league and it was successful enough in the fall that Troy Parks and Rec decided to do it in the spring, as well.

“We were very excited and surprised that we had 38 people participate and we thought that was a great number,” Troy Parks and Rec Director Dan Smith said of the fall league. “We had a great time in the fall playing tennis and so, we decided to offer it in the spring, too. The first week of registration I was concerned because it was extremely slow and I wasn’t sure we would have enough people to even have a spring league.

“Then, in the last few days of registration it just exploded and we ended up with 85 people ranging from children to adults and seniors. We’re also going from playing one night a week to playing three nights a week.” 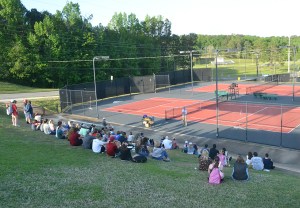 Smith said it’s his department’s mission to make sure there are plenty of opportunities for the youth and adults in the area.

“Our unofficial motto at Troy Parks and Recreation is, ‘Everybody does not play baseball and softball.’ So, that means we need to offer a variety (of activities) for the youth, the adults and the seniors,” he emphasized. “For a lot of people it could be about being competitive or it could just be for fun. There was a young lady that picked up a racket for the very fist time in the fall and now she is playing in tournaments almost every week. So, she’s found her passion and her sport.” 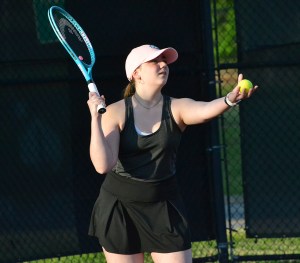 Madison Bassett gets ready for a serve. (Photo by Josh Boutwell)

Smith said that he hopes the fall and spring tennis leagues become annual leagues and said that is the plan moving forward. Smith also said that if players are interested in competing in a post-season at the end of the league this summer, playing towards a championship, that is a possibility, as well. More than anything, though, Smith emphasizes that he’s just thrilled to be able to offer the residents in the area more opportunities to enjoy activities in the city.

“This was a wonderful surprise,” Smith said of the turnout for the spring league. “Any time someone suggests something, we try to make it happen if it’s within reason.

“We say, ‘Sure, let’s offer it and see what happens.’ Social media can be very positive in that regard, in getting the word out to people. That helped us in the fall and we were very pleased and overwhelmed with the number we ended up with this spring. So, we always want to offer opportunities for the youth, adults and seniors and we always want to try to make any suggestions we get happen if we can.”