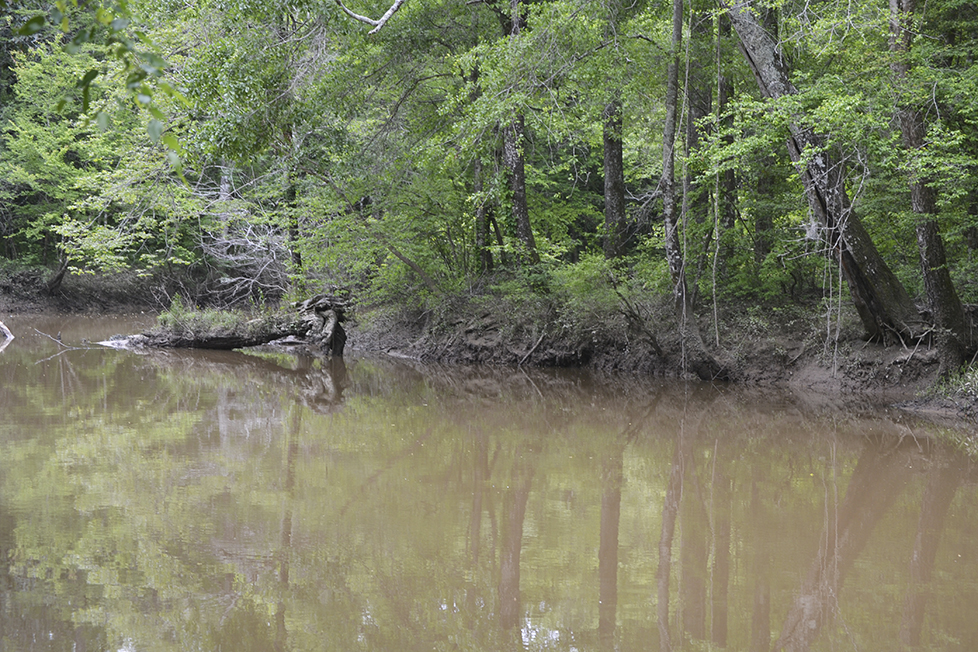 The Pea River at Hobdy’s Bridge in Pike County was host to multiple battles, including two during the Creek War of 1836. (Photo by Josh Boutwell)

The Pioneer Museum of Alabama will present a living history event and battle reenactment in May at the second annual Thunder on the Three Notch.

The event will take place May 13-14 at the Pioneer Museum in Troy with recreations of authentic Native American, American military and militia encampments, stories from the “Trail of Tears,” authentic arts and crafts from the period and battle reenactments from the Creek War of 1836.

“We were looking for something else to do other than our Pioneer Days. So, last year we did it in June but it was just too hot, so we backed up a month to May,” Conecuh River Depot Military Museum Owner and local historian Bob McLendon recalled of starting the Thunder on the Three Notch.

The Creek War of 1836 – also known as the Second Creek War – was a conflict that erupted in Alabama at the time of the Indian Removal between the Muscogee Creek people in the state and non-native settlers.

“People hear about Andrew Jackson coming down from Tennessee to form his ‘Volunteers’ and defeating the Creeks at Horseshoe Bend but really don’t know anything about the Creeks around here,” McLendon said. “There wasn’t many left here by then but those that were still here rose up and there were a few fights and skirmishes right here in Pike County.” 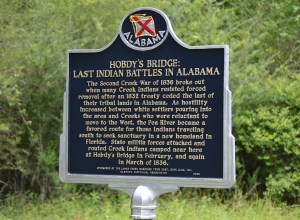 A marker near Hobdy’s Bridge remembers the battles there. (Photo by Josh Boutwell)

In fact, the very last battle of the Creek War of 1836 happened right here in Pike County at the old Hobdy’s Bridge. In early 1837 the Creek people of Alabama attempted to avoid removal to the West by fleeing to Florida – along trails on the Pea River and Conecuh Rivers – to either simply live peacefully in Northwestern Florida or to join the Seminole Nation, who was at war with the American government.

The first Battle of Hobdy’s Bridge occurred on Feb. 19, 1837 when a force of over 100 American militiamen, under the command of Capt. Jack Cooper, intercepted a group of 75 Creeks that were encamped near Hobdy’s Bridge. After a brief skirmish erupted it is believed that between five and six Creeks were killed and potentially one American. In fact, Harrell Hobdy himself was injured during the fight.

Hobdy was a settler from North Carolina that built a home on Buckhorn Creek in Pike County and was one of Pike County’s earliest sheriffs before becoming a State Senator. In 1837, Hobdy built a wooden toll bridge across the Pea River, the first structure to cross the river, which was the site of battles during both the Creek War of 1836 and the Civil War.

Also, an event that took place just west of the location of the future Hobdy’s Bridge saw one of Pike County’s earliest settlers, Robert Pugh, killed by a group of Creeks in 1830 at his plantation.

The second skirmish at Hobdy’s Bridge during the Creek War of 1836 – and the final one – took place on March 27, 1837 and has become known as “The Battle of Pea River.” A combined force of 250 militiamen tracked a group of Creek warriors and their families that had escaped from Polecat Springs Camp, a concentration camp in Macon County, and were hiding along the Pea River looking to cross over into Florida.

Along the way, the Creeks had looted and burned a number of plantations, and when the militia – led by Gen. William Wellborn – discovered the natives’ camp he divided his militia into two wings to encircle the Creeks. A brutal four-hour fight ensued resulting in the death of an estimated 50 Creek women, men and children along with five Americans – including Wellborn’s teenage son – during the battle. A number of Creeks were also captured, as well.

McLendon, who served in the military and law enforcement for more than 30 years, has been involved with doing battle and war reenactments for even longer. McLendon said he feels it’s very important that much less known battles and events like those that happened in Alabama during the Indian Removal are remembered and future generations learn from this history.

“Certain things take place and certain things happen and we can learn from that but we tend to be stubborn and don’t pay attention. It’s also important for personal identity. The people here should know the history of this area and there are people that don’t even know or realize that Indians lived right here but there were, a lot of them.”

McLendon worked with historian and author Dale Cox in constructing the battle reenactments that he said wouldn’t be able to recreate the battles at Hodby’s Bridge but would feature tactics, weapons and clothing that were used during the period.

The Thunder on the Three Notch will begin at 10 a.m. until 5 p.m. each day with arts and crafts and period accurate encampments with stories and living history programs throughout the day before the battle reenactments take place at 2 p.m. The cost of admission is $10 for adults, $9 for seniors and military personnel, $8 for students and free of charge for children aged five and below and members of the Pioneer Museum. For more information, visit creekwar1836.com.

Bob McLendon and Dianne Smith contributed to the research for this feature, along with the book “The Battles of Hobdy’s Bridge and Pea River and Pea Creek: An Indiscriminate Slaughter.”