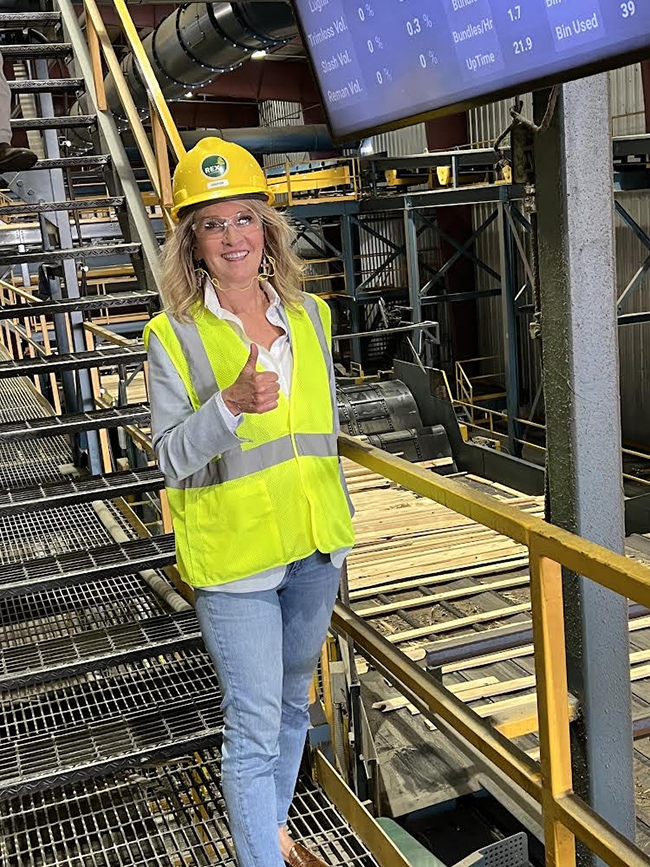 Contributed Photo Alabama gubernatorial candidate Lindy Blanchard recently made a campaign stop in Troy. Rex Lumber was among the sites she visited while in town.

Blanchard’s father, Dwight Cleveland, retired from Troy University as the Director of the Department of Radio and Television.

“He had three girls, and when we were teens, they were building the radio tower,” Blanchard said. “We would climb the tower and hand him parts when he was working.”

Blanchard is currently seeking the Republican nomination for governor in the May 24 primary election.

Blanchard said it was a long road from her days climbing the radio tower to making the decision to run for governor.

Blanchard said she graduated from JD High School and then worked while her husband, John, obtained his college degree. Then, she entered college at age 28, driving to AUM and Auburn. After graduating, she and John started a business managing and acquiring apartment complexes.

When the Blanchard’s oldest son, Christopher, died, Blanchard became more active in supporting children’s needs. She founded the 100x Development Foundation in 2004, which works to improve the lives of children in Alabama and 15 nations abroad.

It was through her work at 100x that she became known among Congressional members.

Blanchard said when President Donald Trump took office, she was asked to apply for the director of the U.S. Agency for International Development. She said she applied, but wasn’t selected for the job. She said her resume then landed in the White House and she was tapped for an ambassadorship to Slovenia.

After her ambassadorship, Blanchard initially decided to run for the U.S. Senate. She said she withdrew after Trump endorsed Mo Brooks because she felt like she was going against the wishes of her old boss.

She said while campaigning for senate, she was asked repeatedly to seek the governor’s office. She said she eventually decided to leave the senate race and seek election as governor.