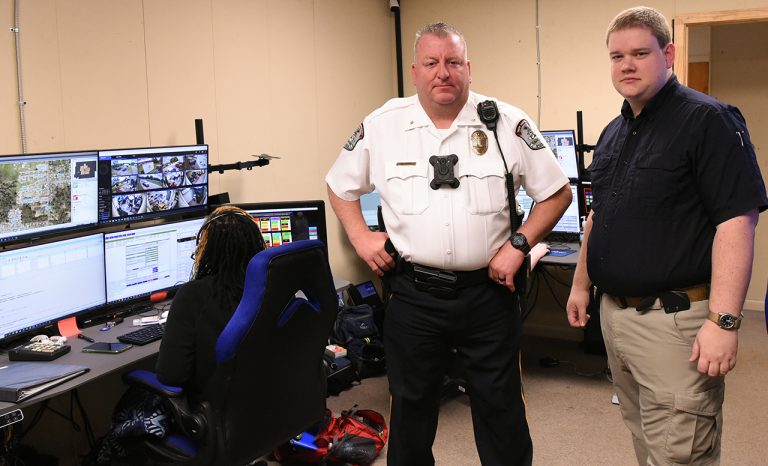 Faster response times and expanded service is the goal of a shift in emergency communications on campus and in Pike County.

“Since October, we’ve had rolling phones after hours,” said Chief George Beaudry. “The rollover system just took too long. The phone had to ring in the office several times before it would roll. Now, it’s seamless and the 911 Center is going to send who is needed.”

Beaudry said the shift to the consolidated dispatch center ends that delay.

“It increases our response times and people who use the non-emergency number who really need 911 get a faster response from the most appropriate agency,” he said.

It’s part of a county-wide consolidation of 911 calls, in which all the local agencies, including fire departments and EMS services, are centrally dispatched.

“Consolidating all the emergency communications just makes a lot of sense, both in terms of operations and financially,” said David Morgan, Executive Director of the Pike County 911 Center.

“We have faster response times and we can pool the resources in the county to better serve everyone,” he said.

Morgan said because the center was staffed 24 hours a day, seven days a week, both emergency and non-emergency calls can be handled by one of the three communicators on duty each shift. Administrative calls can be transferred back to each agency as appropriate, meaning a call to TUPD about a decal gets handled as quickly as a 911 call.

“People can call and tell us what’s going on and let us decide which resource to send,” he said, noting that many calls to the TUPD non-emergency line would be appropriate as 911 calls.

Those types of calls, Beaudry said, were where the new system really shined, cutting down on delays to get fire, police or EMS to the people who needed service.

“Consolidation makes everyone safer. That’s all there is to it,” he said.