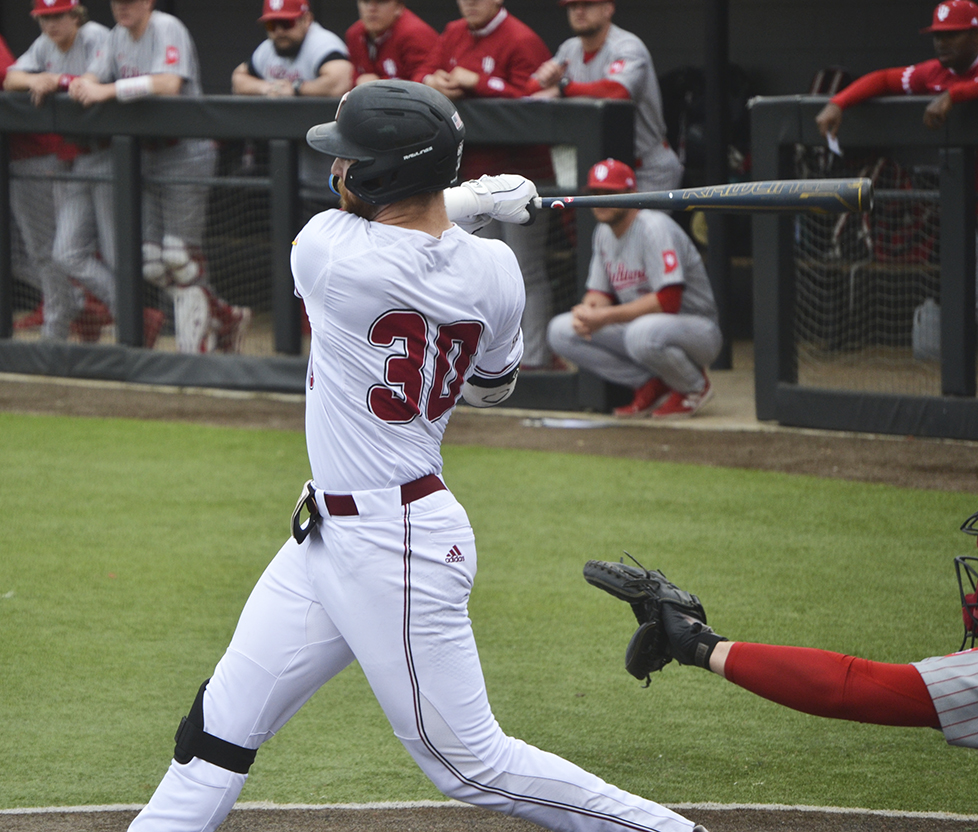 William Sullivan (30) and the Trojans lost a conference series with Arkansas State this past weekend. (Photo by Josh Boutwell)

The Troy Trojans baseball team (24-14) hit the road this weekend and dropped a Sun Belt Conference series 2-1 to the Arkansas State Red Wolves.

The Trojans started off the series with a tough 4-3 loss on Friday as the Red Wolves scored all four runs in the first three innings and hung on as Troy attempted to rally late. Jesse Hall finished the game going 2-for-5 at the plate with two RBIs, while William Sullivan went 2-for-3 with a run. Garrett Gainous took the loss on the mound as he struck out three batters and gave up six hits and two earned runs in six and 1/3 innings pitched.

On Saturday, Troy tied the series up with a dominant 6-1 win. Troy jumped out to a 3-0 lead in the second inning after Easton Kirk hit a solo home run and then Donovan Whibbs hit a 2-RBI single that drove both Trey Leonard and Clay Stearns home.

Kirk went 2-for-4 at the plate with a home run, one RBI and one run, while Whibbs went 2-for-3 with three RBIs. Brady Fuller earned the win on the mound with four strikeouts, while giving up just two hits and one earned run in seven innings pitched.

In the final game of the series on Saturday, Arkansas State picked up a 4-3 win in frustrating fashion. With the game tied 3-3, Arkansas State’s Brandon Hager was walked wit the bases loaded allowing Jared Toler to score the game-winning run on a walk-off walk. In game three, Caleb Bartolero went 2-for-4 at the plate with a run, while Brandon Schrepf went 2-for-4 with an RBI. Rgisby Mosley pitched six and 1/3 innings with eight strikeouts, while giving up six hits and two earned runs. Grayson Stewart fanned three batters and gave up two earned runs in two and 2/3 innings.