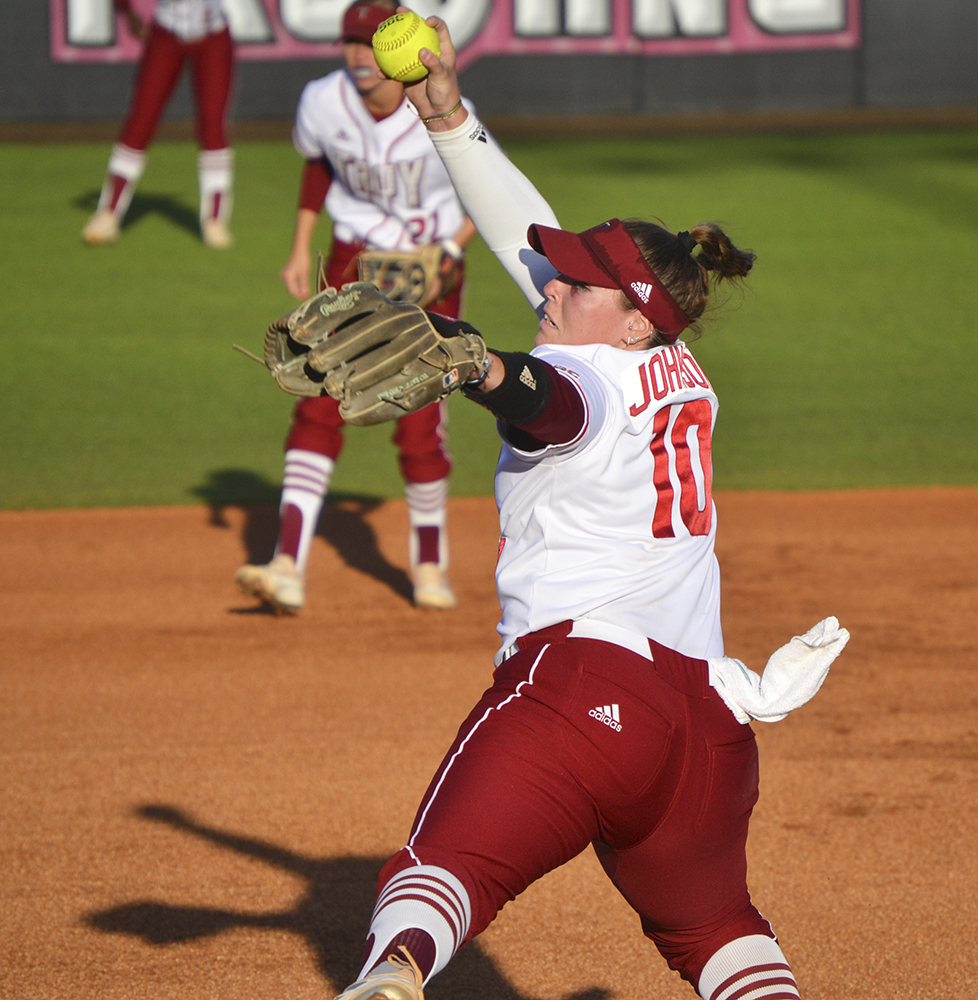 Leanna Johnson (10) earned her 10th no-hitter of the season this weekend along with two shutouts. (Photo by Josh Boutwell)

The Troy Trojans softball team (27-15, 13-8) held on to third place of the Sun Belt Conference by besting UT Arlington in a three-game home series this weekend.

In game one on Friday, Troy shut out UT Arlington by a score of 5-0 as the “Brantley Machine” Leanna Johnson went to work once again earning her seventh shutout of the season. Johnson has amassed at least seven shutouts in each of her four college seasons thus far. In total, Johnson pitched all seven innings and mowed down seven batters, while giving up just one hit.

The two sides remained scoreless going into the bottom of the third inning when Jade Sinness hit a single into left field that drove Candela Figueroa and Kennedi Gaton home. Skipperville native Libby Baker then hit a single of her own that drove both Sinness and Kelly Horne home. Sinness went 2-for-3 at the plate with two RBIs and a run. Figueroa earned seven putouts and an assist defensively from her catcher position.

In game two on Saturday, Troy fell 3-1 to tie the series up. UT Arlington scored all three runs in the third inning. Horne scored one run in the fifth inning but that was as close as the Trojans would get.

Audra Thompson and Katelynn de Leon each earned one hit, the only two hits Troy earned in the game. Horne also earned her 100th career walk, which tied her for the most in Troy history. Hoover freshman Brookelyn Cannon earned her first career start and gave up two hits and no earned runs. Baker pitched four and 1/3 innings and struck out four batters, while giving up no hits and no runs.

Troy ended the series with a 5-0 win on Sunday as both Johnson and Horne etched their names in the record books. Johnson tallied her second no-hitter of the season and Horne earned two walks to put her in first place in school history.

Sinness went 2-for-4 at the plate with a double, an RBI and a single, while Logan Calhoun went 2-for-3 with a run. Johnson pitched all seven innings and retired 11 batters, while giving up no hits or runs. She was just four walks away from a perfect game. Figeuroa totaled 12 putouts, as well.

“I think we played a really sound game offensively, defensively and in the circle,” Troy co-interim coach Taylor Smartt said. “I am so proud of Leanna for her second no-hitter of the season. She always gives our team a chance when she is in the circle.

“Kelly Horne notching the program’s career walks record shows how disciplined she is at the plate, and it is paying off for her. Top to bottom, today was a really good team win to clinch the series.”

Troy hits the road this weekend for another three-game conference series with Texas State.