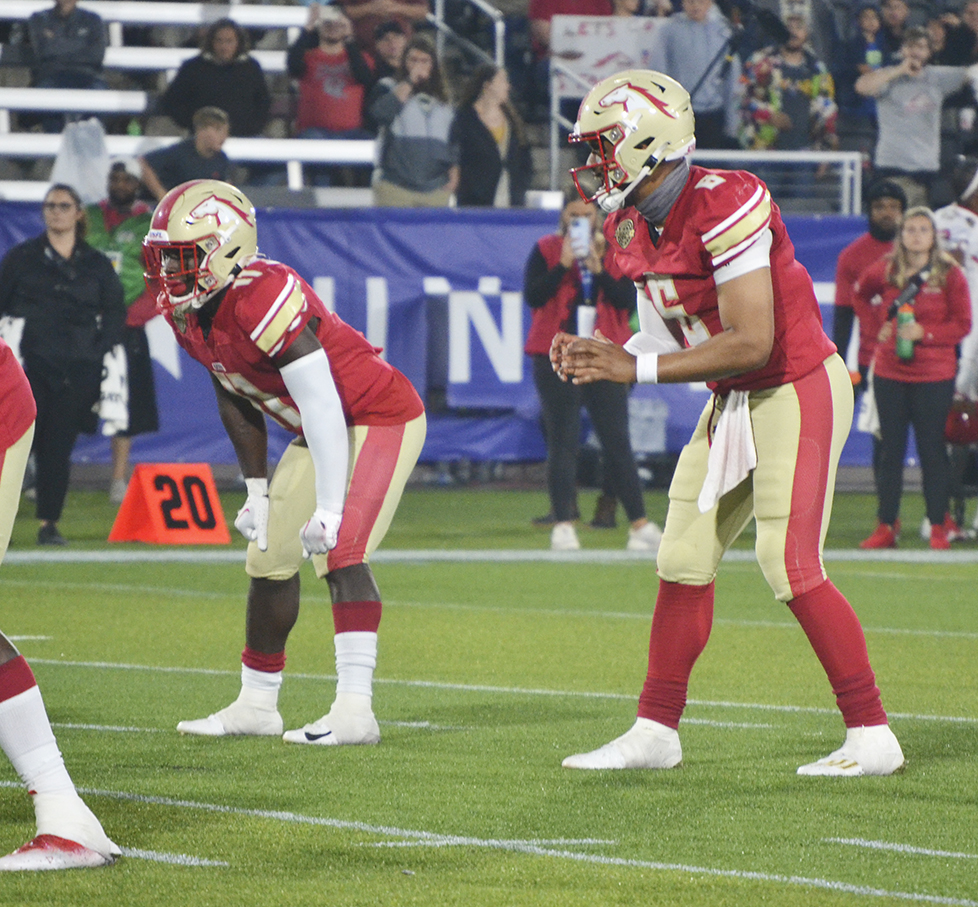 J’Mar Smith (6) guided the Birmingham Stallions to another win on Saturday. (Photo by Josh Boutwell)

The Birmingham Stallions (2-0) are quickly proving to be one of the most exciting teams in the first year of the new United States Football League as they pulled off another thrilling win on Saturday.

The Stallions bested the Houston Gamblers at Protective Stadium by a score of 33-28 in a wild shootout. As the third quarter ended, Houston kicked a 24-yard field goal to cut the Stallion lead to 26-21 but as the fourth quarter began, Birmingham struck. J’Mar Smith heaved a 64-yard touchdown pass – the longest play of the season in the USFL thus far – to Alabama native Marlon Williams with 13:04 left in the game to put the Stallions up 33-21.

On Houston’s next drive, Clayton Thorson scored on a 44-yard touchdown pass to Tyler Simmons to cut the Birmingham lead back down to 33-28.

Houston got the ball back with just over two minutes remaining and Thorson converted a fourth-and-10 by scrambling for 12 yards. The gritty Birmingham defense was not about to let the Gamblers get back into scoring position again, however, as Lorenzo Burns intercepted a Thorson pass near the Birmingham goal line with just over a minute remaining to allow the Stallions to run the clock out.

Defensively, Nathan Holley led the Stallion defense with 11 tackles, while DeMarquis Gates earned nine tackles, one sack and one tackle-for-loss. Burns had two interceptions on the day and Brian Allen also returned an interception for a touchdown.

Birmingham and the New Orleans Breakers are the only two remaining undefeated teams in the USFL but that will come to an end this weekend with the South Division rivals meet in a primetime showdown on FOX at 7 p.m. on April 30.

A pair of Troy Trojans will be on opposite sidelines in that game, as running back Jordan Chunn plays for Birmingham and offensive guard Steve Rowzee plays for the Breakers. Chunn has been inactive for the first two games due to injury but his return to the lineup would give Birmingham an added power runner to the lineup.