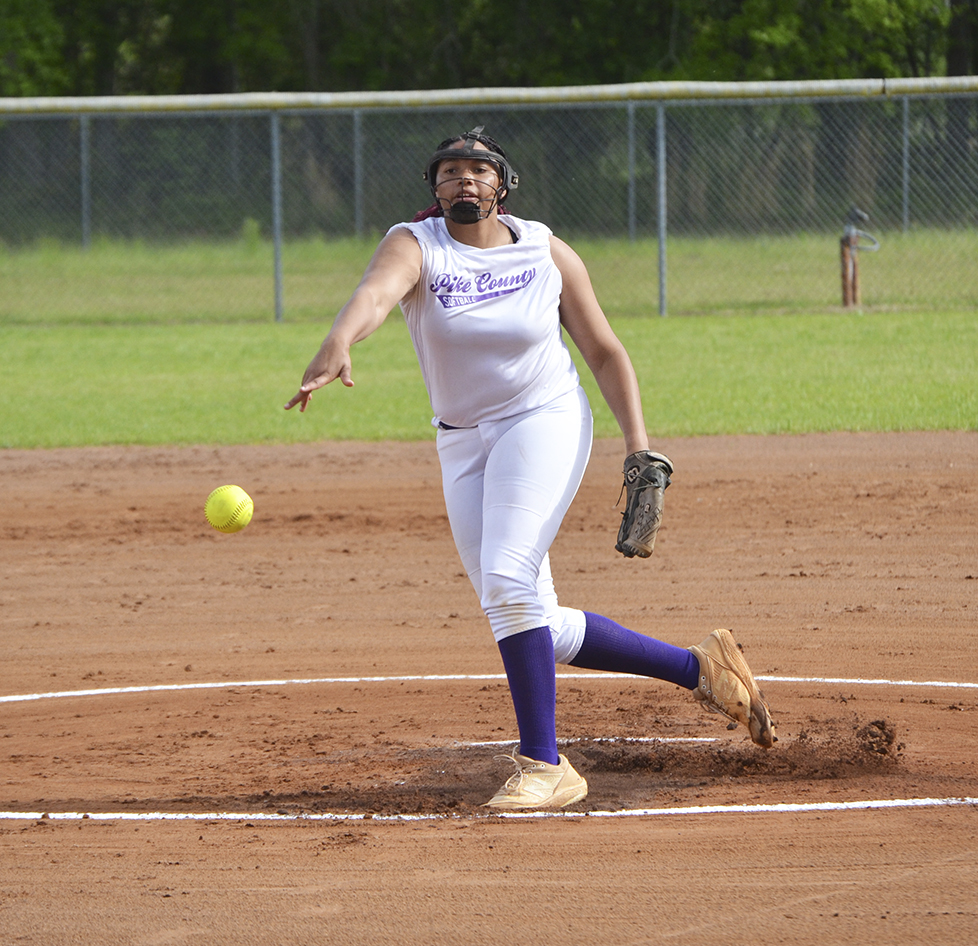 Kylan Wilkerson was a star at the plate and in the circle in the Elba Tune-Up Tournament.

The Pike County Lady Bulldogs and Zion Chapel Lady Rebels both competed in the Elba Tune-Up Softball Tournament this past weekend with PCHS going 2-1-1 and ZCHS finishing 1-2.

Pike County opened up pool play battling to a 4-4 tie with Daleville on April 22. Pike County controlled the majority of the game, holding a 4-0 lead going into the fourth inning but the Lady Warhawks responded by scoring four runs in the final two innings to tie the score. Because it was a tournament game – non-area tournament games are played for no longer than five innings – the game ended in a tie.

Kylan Wilkerson went 3-for-3 at the plate with one RBI, while Auriel Moultry scored two runs. Wilkerson pitched four and 2/3 innings and earned eight strikeouts along with allowing four hits and one earned run.

In game two of pool play, Pike County answered with a dominant 12-0 win over host school Elba. Pike County wasted no time scoring eight runs in the first inning. Amity White finished the game going 3-for-4 at the plate with a double, one RBI and two runs. Mikalah Griffin, Urriya Berry and Takeyah Smith each scored two runs. Wilkerson pitched four innings and mowed down seven Elba batters, while giving up just one hit in her shutout win in the circle.

In the first round of the elimination portion of the tournament, Pike County bested Red Level by a score of 8-4. Pike County led 4-1 going into the third inning when Red Level responded by scoring three runs in the top of the third inning to tie the score 4-4. In the bottom of the third, White hit a line drive single into right field that drove Ayissa Hiersche home to put the Lady Dawgs up 5-4. Moultry extended the lead with a double that drove both Jada Duncan and White home before Amber Kidd hit a ground ball single to drive Brianna Shaffer home. Pike County held Red Level scoreless for the rest of the game to hang on to the win.

Kidd went 2-for-2 at the plate with an RBI, while Wilkerson went 2-for-3 with a home run, three RBIs and one run. Wilkerson struck out three batters, while giving up seven hits and two earned runs in four innings in the circle.

In the quarterfinals, Pike County fell by a score of 9-1 to Saint Paul’s. Pike County earned just three hits in the game. White went 2-for-2 at the plate with a stolen base and one run. Wilkerson pitched three and 1/3 innings with two strikeouts. She also gave up five hits and one earned run. Abigail Griffin pitched one and 2/3 innings, giving up four hits and two earned runs.

Zion Chapel fell 12-0 to Opp on Friday. Shea Wambles and E. Sheets each had one hit. S. Booth struck out two batters, while giving up 14 hits and 10 earned runs in three and 2/3 innings in the circle.

On Saturday, the Lady Rebels notched an 8-1 win over Cottonwood. Wambles went 2-for-3 at the plate with two RBIs and two runs, while Kaylen McCallister also went 2-for-3. Riley Bannin pitched five innings and struck out eight batters, while giving up four hits and no earned runs.

Zion Chapel was eliminated on Saturday in a tough 5-3 loss to Providence Christian. Bannin went 2-for-2 at the plate in the loss with an RBI. Sydney Booth pitched five innings and fanned three batters, while giving up seven hits and one earned run.

Bulldogs head from the football field to the basketball court