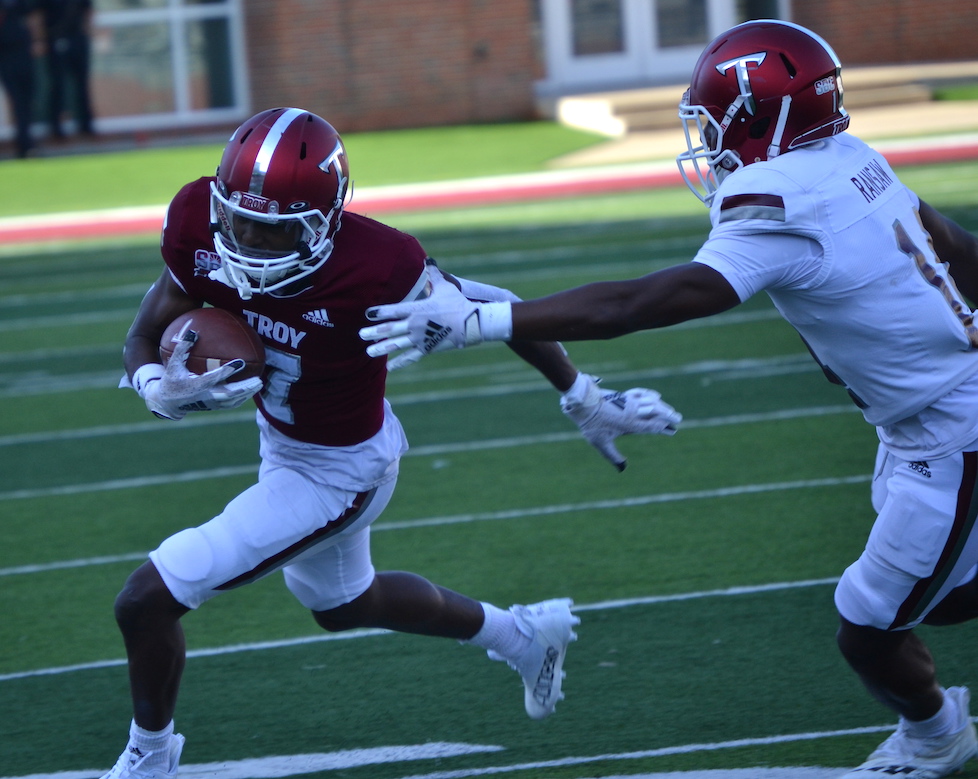 The Troy Trojans football team closed out spring practices on Saturday with its annual T-Day game and the veteran Trojan defense guided the White Team to a resounding 31-10 win over the Cardinal Team.

Troy head coach Jon Sumrall split the team up into cardinal and white teams. The No. 1 defense played for White and the No. 1 offense played for Cardinal. Quarterbacks and offensive lineman swapped between teams, however. Returning starting quarterback Gunnar Watson spent the first half with the Cardinal, while Quayde Hawkins played for the White. The two then swapped to start the second half and they swapped sides again in the fourth quarter some, as well. Redshirt freshman Will Carn also got some reps with both teams.

In the second half, Jarris Williams got the White back the end-zone with a 2-yard touchdown run. Williams also had a 39-yard run on the drive. Carloss Crawford forced a fumble and intercepted a pass for the Cardinal. Markeis Colvon also had an interception.

Through three quarters, Williams had five carries for 61 yards and a touchdown, while Hawkins completed 8-of-13 passes for 54 yards, a touchdown and an interception.

“It was a great turnout by our fans,” Sumrall said. “We had a lot of events on campus today with the Fun Run, Lunch with Legends, Kids Camp and then the opportunity to watch our guys go out and compete in our stadium and hopefully see us grow as a team.

“I was encouraged by the direction we’re going. We still have a long way to go, but we’re headed in the right direction.”

If there was an MVP of T-Day it was unquestionably Slocum.

“Craig Slocum is an absolute stud,” Sumrall said. “He does everything the right way. He practices the right way. He puts in the effort the right way. You walk out the building at night, and he’s in there watching tape. He’s a former walk-on who has worked extremely hard at his craft to become the kind of player he is.”

“I love the way the defense played today,” Martial said with a big grin. “We flew around today. One of my closest friends, Craig Slocum, got two picks today and I’m glad he was able to go out with a bang like that. This is both of our last spring.”

The Trojans had even more to celebrate after the game as walk-on sophomore Keyshawn Swanson was awarded with a scholarship as his family looked on.

“It’s really kind of surreal right now,” Swanson said. “I’ve been working for this for three years. I tried to stay optimistic about everything but you have those days where you wonder if you’re ever going to get that scholarship.”

Both Martial and Slocum started out as walk-ons at Troy before becoming star players.

“Being a walk-on and getting that scholarship is one of the best feelings in the world,” Slocum said. “(Swanson) is one of the hardest workers on the team. I was just so happy for him, it was like I was getting my scholarship all over again.”