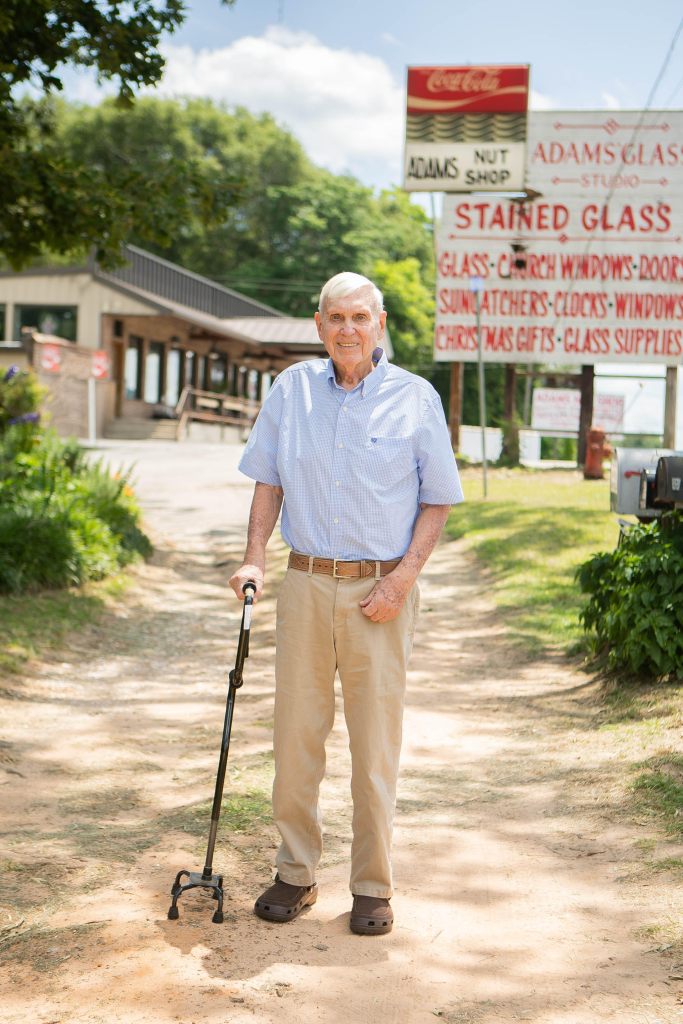 On a cold, late November morning in the year 2011, Charles Adams stood watching as flames engulfed the glass and nut shop where he had spent most of his working and waking hours, all his adult life. His thought was the blazing flames would bring an end to what his daddy, Sam Adams, began 60 years before. Later that night, as the rubble continued to smolder, a feeling of hopelessness consumed Adams. Perhaps, this was the way for it to end. In ashes.

But, before the ashes cooled. Adams knew in his heart that Adams Nut Shop/Glass Studio on Highway 231 south of Troy was such a part of him that he couldn’t let go

“That was who we are. We had to build back,” Adams said.

In November 2012, Adams Nut Shop re-opened in the same location.

But, it was not Sam’s store. It was too modern. But it had Sam’s handprint on all over it. Materials from family structures were used in the rebuilding process.

The Adams’ family patriarch started selling pecans at a roadside stand under an old oak tree in1953 in Clio. As times changed, he moved his roadside stand “to a busy road.” It was a wise move.

Outside, Sam had a mule-drawn mill that stopped tourists on a dime during the fall to sip cane juice from a tin dipper. The “Ice Cold Watermelon” signs brought folks in droves during the summer months. Sam grew square gourds, sold porcupine eggs and pulled kids’ noses off and put them back on. His tricks and stories amazed and amused folks.

During “shoot-off season,” Sam sold fireworks inside the store and at a roadside stand.

Charles watched and learned from his dad because he knew his future was in the store, But, not long after he graduated from high school in Clio, his senior teacher Fanny Easterling, turned him in a different direction. Toward Troy State College.

“Mrs. Easterling stopped by the store one day and told me to get ready, she was taking me to sign up for college. That day changed my life.”

Charles had no idea what his “major: would be, until he took a glass art class from Ed Walter who was a pioneer in glass art.

“What Mr. Walter was doing with glass fascinated me,” Charles said. “He took a real interest in me and saw something in me I didn’t see. Any success that I have had as a glass artist, I owe to him and to Alice Thornton, an art teacher and mentor and a great influence in my life.”

Charles sold his glasswork at area art shows and was invited to juried art shows. He became a regular craftsmen shows in Gatlinburg, Tennessee.

“My goal was to make stained glass windows for every small, rural church that wanted them and at an affordable cost.”

Adams said the most important and lasting thing he did as a glass artist was church windows.

“Hopefully, the windows add more than beauty to the sanctuaries, maybe they offer peace and comfort and hope.”.

Charles Adams’ glass art studio produced a variety of stained glass artwork — from windows and doors to lamps and clocks and specially designed items. In the kitchen Adams’ legendary all-day suckers, fudge and divinity were handmade.

Adams was a strong supporter of the arts.  He was a founding member of the group that originated the Jean Lake Art Festival at the Pike Pioneer Museum in Troy. When the arts show moved to downtown Troy as TroyFest, Adams remained involved as an active member of the festival committee and as a participant.

Charles Adams made a name for himself in the art world but the thing that he said he was most proud of was “the store.”

David Adams has followed in the footsteps of his grandfather and his dad.

Charles said his son is the same type “character’ as Sam.

“David gets along with everybody and folks like being around him,” he said. “He has grown up in the store. He knows it from one end to the other. It’s like a second home to him.”

Most of all, Charles said David is a good glass artist.

“Better than I have ever been,” he said. “I’ve been doing this… the store and glass art … for a long time now and it’s time for me to get out of the way and let David have this. He will do things I’ve never thought of. He’ll do alright by me … and by Sam. I know he will.”