Spring Guide: What to watch for at T-Day 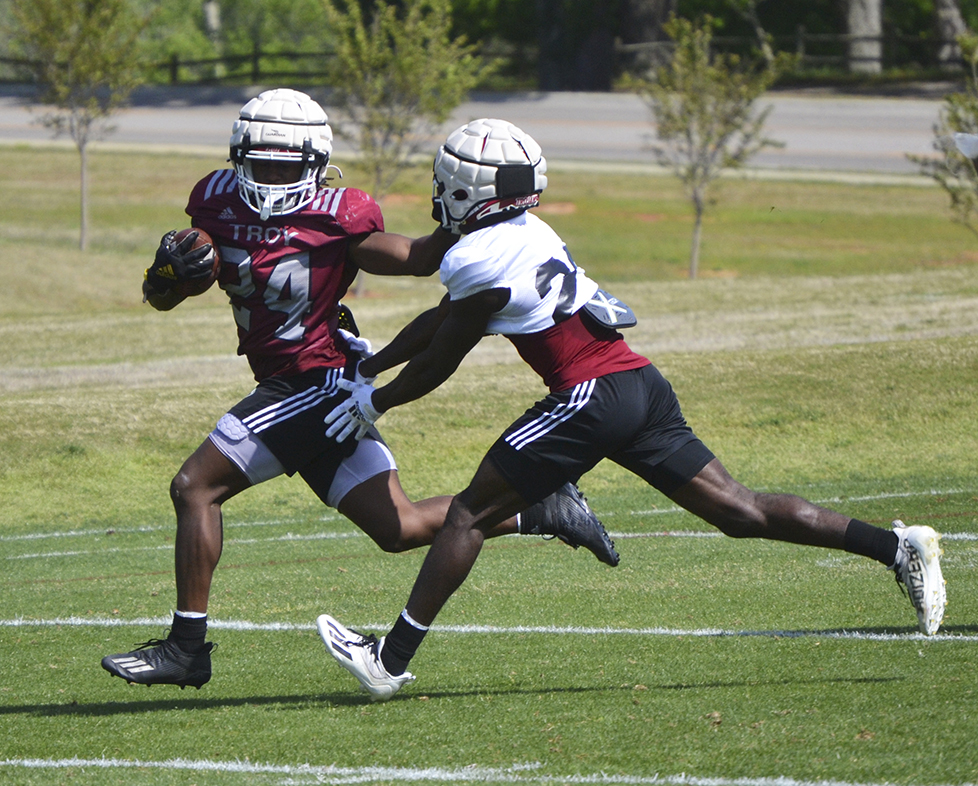 The Troy football team will suit up one last time this spring for the T-Day game this Saturday at 4 p.m. at Veterans Memorial Stadium and there are a number of storylines to look for going into the game.

With a new coaching staff comes minor and major changes and many of those will be on full display this Saturday and the following is your guide for the various things to look out for.

Troy will implement a unique spring game during T-Day with the No. 1 offense and No. 2 defense on one team and the No. 1 defense and No. 2 offense on the other. The quarterbacks and offensive line, however, will bounce between both teams. The defense can also score points this year, as well.

“We won’t run everything we’ve put in – we’ll pare it down and try to simplify it to a degree – but we need to execute from a communication standpoint confidently and I’d love to see us get every one out of it healthy.”

New offensive coordinator Joe Craddock is bringing a new offense to Troy with more of an emphasis on a downhill running style. Both Craddock and Sumrall have been very clear and open about wanting to place an emphasis on the running game, something that was not emphasized by the previous coaching staff.

Running back Kimani Vidal has been stellar in his first two years at Troy and his ability to catch passes out of the backfield will also be emphasized in this offense. Big running back Charles Strong was moved to linebacker last season but has moved back to running back this spring and is flourishing as his punishing running style fits perfectly with Craddock’s between-the-tackles run game. 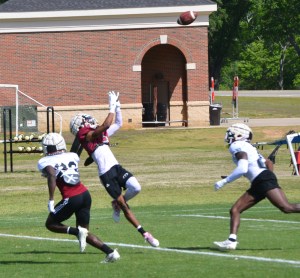 Troy also wants to place emphasis on protecting the ball and taking shots down the field on play-action passes. The Trojans return only Tez Johnson and UAB-transfer RaJae’ Johnson as players with starting experience at receiver, and those two along with some young players will look to make plays down field when given the opportunity. 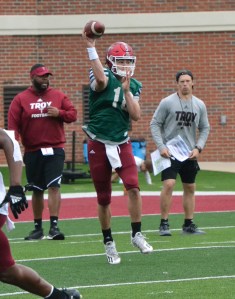 Troy came into the spring with four quarterbacks and will go into T-Day with just three after Kyle Toole entered the transfer portal. Gunnar Watson and Quayde Hawkins have been battling for the No. 1 job all spring and that will continue at T-Day as both the quarterbacks and offensive line will play on both the Cardinal and White teams. This game will likely not decide who the starter is but it will certainly play a part in it.

Watson brings the experience and command of the offense to the table, while Hawkins possesses a strong arm, quick release and is a more mobile quarterback.

Troy has to replace three-year starter Dylan Bradshaw as the anchor of the offensive line at center and a number of different players have rolled in and out of the position throughout the spring. The two that seem to have begun to stand out among all others is redshirt freshman Logan Self and starting junior offensive guard Jake Andrews. Both Self and Andrews have earned their fair share of snaps with the first team offense during the spring and will continue to compete for the starting job at T-Day. Sophomore transfer Jeremiah Frazier is also competing for the job. 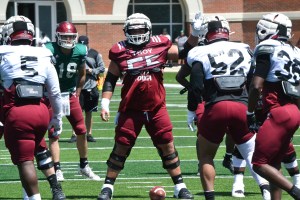 Logan Self (55) will be one of the players rotating in at center at T-Day. (Photo by Josh Boutwell)

“We’re evaluating everyone and seeing how it goes at every spot really,” Troy offensive line coach Cole Popovich said. “I don’t think there’s any spot that is just locked up really. We’ll roll guys in there (at T-Day) and see guys come in at different spots.”

Popopvich said whether or not Andrews becomes the starting center, it’s a big plus for him to be able to play the position.

“He’s good,” Popovich said. “He’s a good guard and if he can have the ability to go in at center, if we need him to, that would help us a lot. He’s done a really good job learning it and still working at guard.”

The Troy defense returns a load of starters from last year’s team, including All-Sun Belt players Carlton Martial and Javon Solomon, and the experienced defense has looked to be far ahead of the offense at times during the spring, thus far. Sumrall confirmed on Thursday that Solomon would not play during T-Day, as he’s still healing from an injury. With Solomon’s injury, it will give a chance for some younger players to get reps that they probably wouldn’t have otherwise. 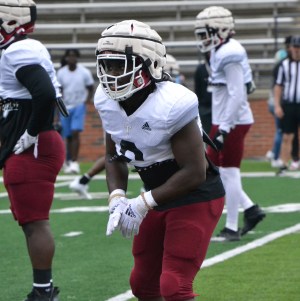 Carlton Martial (2) is one of Troy’s returning leaders on defense. (Photo by Josh Boutwell)

Also, the defense has an opportunity to score points of its own this year at T-Day. Not only will a defensive touchdown count as points for the defense, but the defense can earn points by forcing turnovers, forcing three-and-outs and forcing punts. 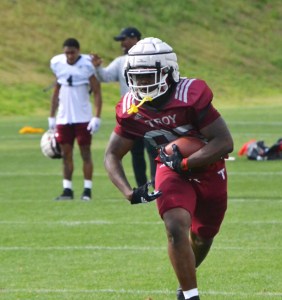 The tight end position has been an underutilized position on the Troy roster over the last several years but in the new Troy offense the position will see much more emphasis, both in the passing and running games. Returning starters Deyunkrea Lewis and AJ Pierce along with Samford transfer Michael Vice have seen plenty of action this spring and it will be interesting to see how much attention the tight ends receive at T-Day.

Returning kicker Brooks Buce is nursing a hip injury this spring and won’t be kicking at T-Day, which will give Troy native Scott Taylor Renfroe and Kyle Coale plenty of opportunities to kick the football. Australian punter Luke Magliozzi will also look to continue to boom punts, as well. 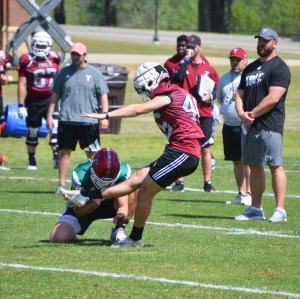 At Troy a number of former walk ons have gone on to earn scholarships and become stars for the Trojans, including All American Carlton Martial. The 2022 Trojan team has plenty of walk ons – including some Wiregrass locals – and everyone will get an opportunity to make their presence felt at T-Day. Among the local players on Troy’s team are former Daleville standout offensive lineman Gabe Elrod, New Brockton native and Army transfer tight end Russell Weeks, Opp spear Orlando Lacey, Troy’s own Renfroe, Pike County receiver Jaidyn Wilson, Pike Lib linebacker Peyton Dicks and Abbeville tight end Jackson Blalock. The question will be, when given the opportunity, who can stand out? According to Sumrall, some of Troy’s more experienced players will play only a quarter or a half, giving younger players a chance at more reps. Sumrall said every opportunity that young players – whether a backup or a walk on – is an opportunity to make an impact.

“Every opportunity you get to go out and execute our offense or defense and perform, you’re giving yourself a chance to earn more opportunities later,” Sumrall said. “You either earn more or you get less given to you because you didn’t earn it.

“I think it’s huge for all the guys, especially a lot of the guys in backup roles, to step up and show, ‘I’m ready to get more and earn more’ as we continue to grow.”

T-Day kicks off at 4 p.m. at Veterans Memorial Stadium this Saturday.