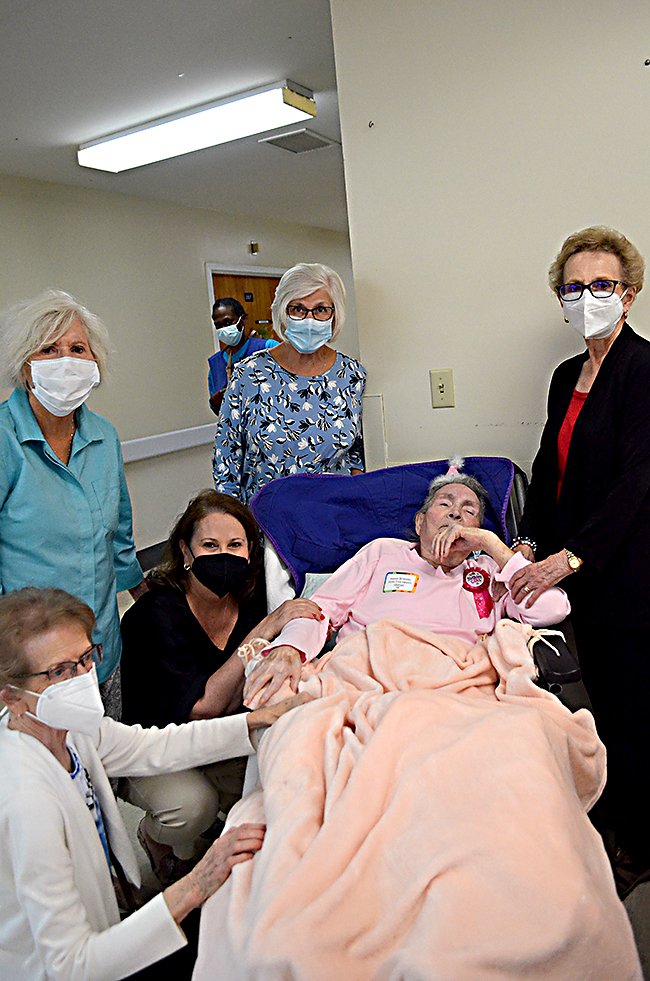 Annette Hollis, a resident of Troy Health and Rehabilitation Center, celebrated her 102nd birthday April 18, with friends from her church, St. Mark’s Episcopal Church in Troy.

Hollis, a native of Banks, is proud of her rural heritage and calls Banks home.

As a longtime member of St. Mark’s Episcopal Church, Hollis shared her remembrances of the early days in a letter to the church.

In the 1920s and 1930s, Troy was a rich and vibrant city, Hollis wrote. A sign on Highway 29N proclaimed the town as the fifth richest in United States for its size.

“Banks was a bustling village in 1920, with a drugstore, a hotel, a depot, a cotton gin, two churches, three mercantile stores and a school.

“But just before the outbreak of the First World War, a great fire broke out in Banks and, among other things, burned down the Banks school. It was a terrible loss.”

Not long after, the great epidemic of flu struck Troy with all its wrath. The Hollis family was spared, but Troy was a place of real suffering. Mary Harmon Bryant’s father was first to die here.

People buried their dead every day, Hollis wrote. Nursing facilities and doctors were in short supply, and neighbors helped neighbors wherever they could.

Hollis also wrote that, when she was a preschooler, College Street ended where the concrete “ Gate” now stands. No house stood save the unusual-styled McCartha-Knox house which still stands.

Everywhere on “our” church area, extending the length of College Extension, was only wild growth – trees, bushes, trash, weeds, tangled vines – to the Murphree Street exit downhill. In the center of the wild growth was the ruins of a once beautiful raised cottage – exquisitely beautiful in decay and a setting for a Gothic novel. When I visited cousins on Walnut Street as a child and when we children went out to play, our elders sternly ordered, “Don’ t go near the old College,” which was the name given to the ruined building, for fear the tall remaining walls would fall in on us.  “The old College” as it was called, gave College Street its name.”

In 1938, Hollis attended Birmingham Conservatory and Birmingham Southern College. Except for visits home, she was away 17 years and did not live in Banks again until 1955.

She taught in Birmingham until 1955 and came home. It was best to be nearer her aging parents, she wrote.

She accepted self-employed teaching jobs in places less far from Banks, always attending the Episcopal Church closest to her teaching job but occasionally was able to come to St. Mark’ s. I became a regular communicant in the 1980’s.