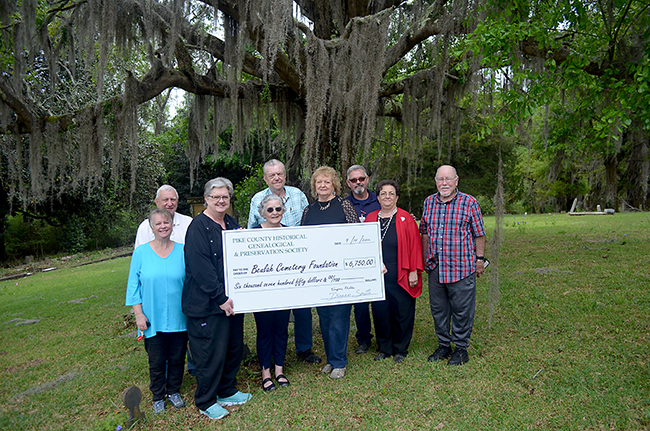 The Pike County Historical, Genealogical and Preservation Society presented a check in the amount of $6,750 to the Beulah Cemetery Foundation to be used in the upkeep of the historic cemetery, Troy’s oldest.

Diane Smith, society president, said the funds were made possible through a Chapman Foundation Grant and the sale of the historical society’s book titled “Pike Potpourri.”

Local historian Karen Bullard, compiled the publication that documents county’s history from its founding on December 17, 1821 until its Bicentennial celebration on December 17, 2021.

“When Karen asked me about putting together a book in recognition of Pike County’s Bicentennial, I was honored,” Bullard said. “The history of our county is very dear to my heart.

To be a part of a published record of 200 years of Pike County’s history and to work on the project with Karen was a blessing.”

In appreciation for Bullard’s commitment to “Pike Potpourri,” and her dedication to the preservation of local history, Smith said the members of the Pike County Historical Society asked her to suggest how the proceeds from the book sale might best be used.

“My thought was of the Beulah Cemetery Fund,” Bullard said. “I had served on the board of the Beulah Primitive Baptist Church and the cemetery board and understand the good work they do. Beulah was also my first preservation project. I was appreciative that is how the membership chose to use the funds from the Corley Chapman Foundation and the sale of ‘Pike Potpourri.’ I’m sure the funds will be used wisely.”