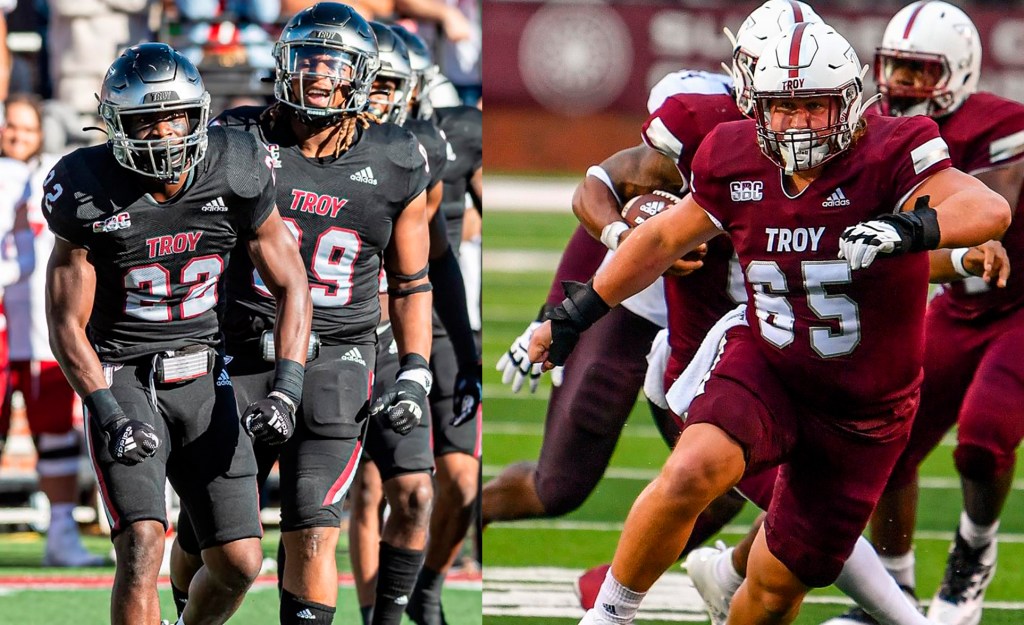 Dylan Bradshaw (65) and Kyle Nixon (22) have been named to the 2022 NFF Hampshire Honor Society. (Photos courtesy of Troy University Athletics)

Bradshaw and Nixon were two of 1,559 players from across the entire country that qualified for membership in the 2022 Honor’s Society.

The prestigious honor is bestowed on players nominated by their schools that must have completed their final year of eligibility or already graduated with eligibility remaining, attained a minimum undergraduate cumulative GPA of 3.2, met all NCAA and NAIA-mandated progress towards degree requirements and been starting players or significant contributors throughout the 2021 season.

The NFF Hampshire Honor Society is a part of the NFF’s National Scholar-Athlete program and is in its 16th year. Bradshaw graduated in 2020 with his bachelor’s degree in economics and is currently pursuing his master’s degree in leadership. Nixon is a music industry major. Both Nixon and Bradshaw are multi-year starters for the Troy football team.

“As the National Football Foundation celebrates its 75th anniversary in 2022, we are pleased to honor another impressive group of athletes as part of this year’s Hampshire Honor Society,” NFF President and CEO Steve Hatchell said. “Over the last 16 years, the Hampshire Honor Society has served as a powerful vehicle for schools to recognize their college football players who have distinguished themselves both academically and athletically, and we congratulate the schools and each of these young men for their commitment to excellence in all aspects of their lives.”

In 2021, Nixon started all 12 games and totaled 51 tackles, three tackles-for-loss, an interception and three pass breakups. The Fort Valley, Ga. native earned a total of 105 tackles, 3.5 sacks and two interceptions in his career from his safety position.

Bradshaw became a starter at Troy as a sophomore, starting at offensive guard, in 2018. He earned All-Sun Belt honorable mention in 2019 before moving to center in 2020. The Enterprise native went on to start 23 games for the next two seasons at center and earned second-team All-Sun Belt in both 2020 and 2021.