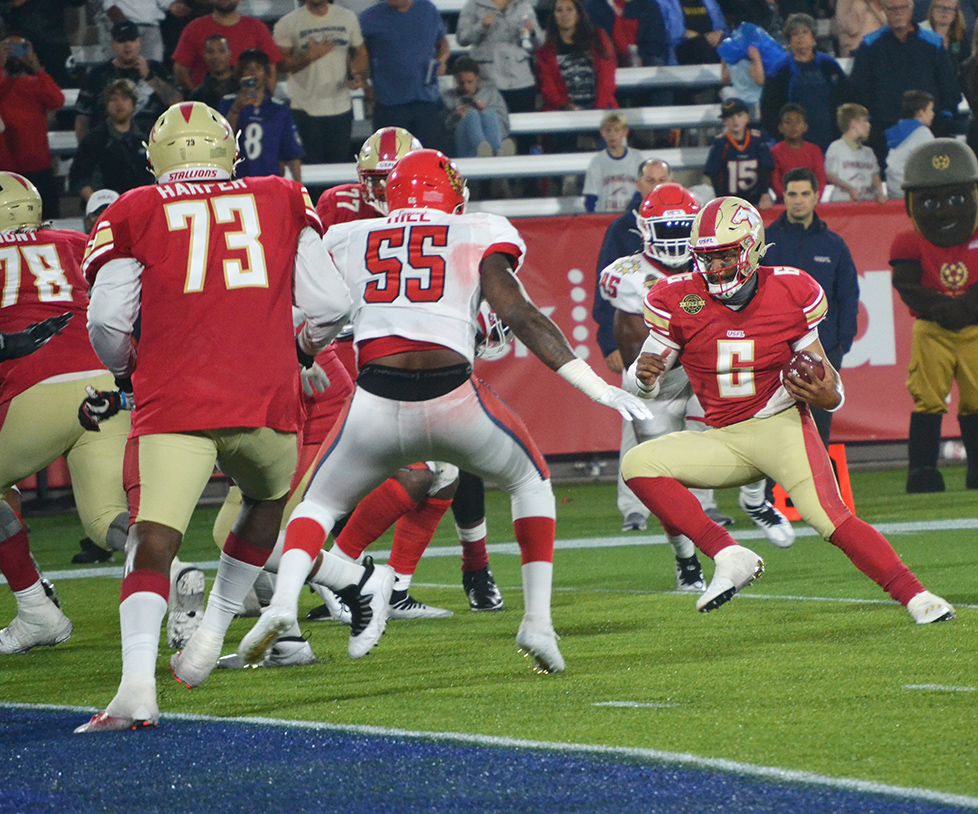 Birmingham’s J’Mar Smith (6) scrambles before diving into the end-zone for the game-winning touchdown. (Photo by Josh Boutwell)

The Birmingham Stallions rallied to defeat the New York Generals by a score of 28-24 in the inaugural game of the new United States Football League on Saturday.

Birmingham’s backup quarterback, J’mar Smith, became Birmingham’s hero as he scored the game-winning 2-yard touchdown run with just 23 seconds remaining in the game to put the Stallions up 28-24. It was Birmingham’s first lead of the entire game.

While the game had a thrilling finish, it had an equally thrilling start. New Jersey’s Luis Perez – who played for the Birmingham Iron of the Alliance of American Football in 2019 – heaved a 49-yard pass to receiver Randy Satterfield to open the game. A few plays later he threw a 3-yard touchdown pass to Satterfield to put New Jersey up 7-0. Birmingham responded when Stallions starting quarterback Alex McGough threw a 35-yard touchdown pass to former Mississippi State receiver Osirius Mitchell to tie the score.

The two teams then combined for five punts on the next five drives. McGough especially began to struggle and threw an interception in the second quarter before suffering an ankle injury. The Generals took a 14-7 lead when Perez threw a 13-yard scoring pass to Braeden Bowman. At that point, Smith entered the game at quarterback for Birmingham but the Stallions went three-and-out for the third straight drive.

New Jersey missed another short field goal to open the second half and then Smith drove the Stallions on an 80-yard scoring drive, capped off by a 3-yard touchdown run from Coastal Carolina’s CJ Marable to tie the score 14-14. 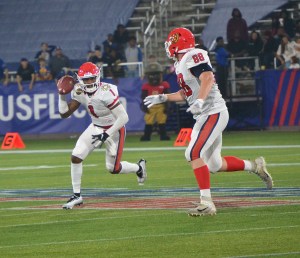 The Generals, however, marched on a long 11-play scoring drive that took the game into the fourth quarter. The Generals used a two-quarterback rotation throughout the game with Perez sharing duties with former Florida-Atlantic quarterback De’Andre Johnson. Johnson gave New Jersey the lead back 21-14 on a 4-yard run.

Birmingham responded right back as Smith found tight end Cary Angeline for a 13-yard touchdown pass to tie the score 21-21. New Jersey got the ball back with more than five minutes remaining and then marched into Stallion territory on an 8-play drive with all rushing attempts. The Stallions managed to force a fourth down and New Jersey chose to boot a 47-yard field goal instead of going for it on fourth-and-two. The field goal gave the Generals a 24-21 lead with just under two minutes remaining.

It was plenty of time for the Stallions, however. Smith marched Birmingham right down the field and with just under 30 seconds remaining, the Stallions had the ball inside the New Jersey 5-yard line. Smith rolled to the right but couldn’t find a receiver, so the former Louisiana Tech quarterback scrambled and weaved his way through the General defense for a 2-yard touchdown run that ended up being the game-winner. New Jersey attempted three “Hail Mary” passes to end the game but all three came up incomplete.

“He did a phenomenal job,” Birmingham coach Skip Holtz said of Smith. “I’ve been watching him do this for a long time in college. So, it was neat to see him get out on that field and do it here, too.”

Mitchell caught five passes for 97 yards and a touchdown. Former Ole Miss linebacker DeMarquis Gates led the Stallion defense with 10 tackles, one tackle-for-loss and a sack. Troy’s Jordan Chunn was listed as Birmingham’s backup fullback for the game but was inactive due to the number of players teams are allowed to have active each week.