The ‘sog-a’ of Mims Creek 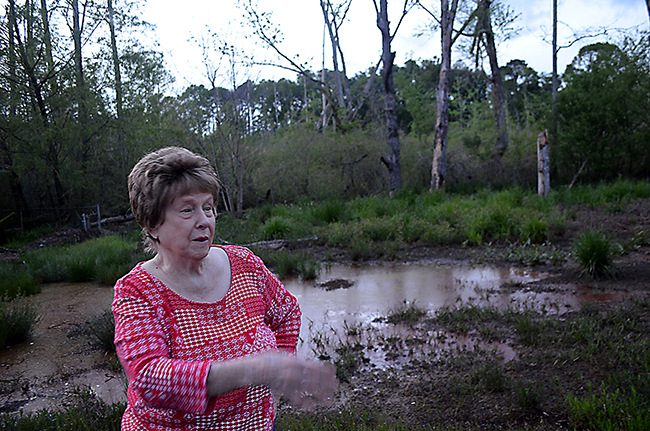 Jaine Treadwell | The Messenger Maxine Dubose discusses the flooding of Mims Creek and how it affects her backyard.

“Watch your step,” she cautioned Margaret Ross, Brundidge City Council member. “But, you remember how pretty our yard used to be.”

Dubose, a resident of Johnson Street in Brundidge, is one of six to eight residents who have been dealing with the overflow of Mims Creek for more years than she remembers.

For the 10 years Ross has served on the city council, she has been a proponent for the residents whose property runs next to the creek.

“So many times, we, the Johnson Street property owners would go the city council meetings and ask and plead for something to be done,” Dubose said. “But, there was always some reason – from not being able to gain access to the property to governmental/environmental regulations. All that time, the creek was filling up with sand and sludge and the water kept rising until it ran over onto our properties and overtook much of our backyards. The standing water has killed our plants and trees. It has flooded workshops and sheds. You can see where it is now.”

Mims Creek no longer appears to be a creek. There is no “bed” in which it can run.

Dubose’s backyard is now a marshland “or a swamp,” as are the properties of other homeowners along the creek.

“Everybody in our neighborhood is and has been dealing with this problem,” Dubose said. “Bertrum and I bought this property in 1956. For years, we had a beautiful backyard and enjoyed it so much. Now, I don’t even go out in the back. I worry about snakes and, in the summer, the mosquitos.”

“I want to know that I have done all I can,” Dubose said. “Margaret (Ross) understands what it has been and is for us. She said the Pike County Commission is aware of the problem with Mims Creek and is working with the city toward a solution. I’m afraid to hope again.”

Mims Creek is in Pike County Commissioner Chad Copeland’s district. He said, there is hope.

“A few years ago, several residents on Johnson Street in Brundidge contacted me and asked for help with flooding and erosion issues along Mims Creek,” Copeland, said. “I called the City of Brundidge and found out that they had been working on a solution for this issue for years. In early 2020, the Commission agreed to add the Mims Creek Project that the City of Brundidge had prepared, to our Hazard Mitigation Plan.”

After Hurricane Sally in September of 2020, FEMA announced the availability of grant funds for projects on the Pike County Commission’s mitigation plan, Copeland said.

“The Commission voted unanimously to apply for funds to partner with Brundidge on the Mims Creek Project as well as purchasing three storm shelters, some additional emergency traffic barriers, weather radios to be distributed in the county, and some marketing funds to help increase the participation in our Smart 911/Rave Alerts program,” Copeland said. “As of today, we are still waiting for the FEMA funds to be released, but we feel confident that will happen eventually.”