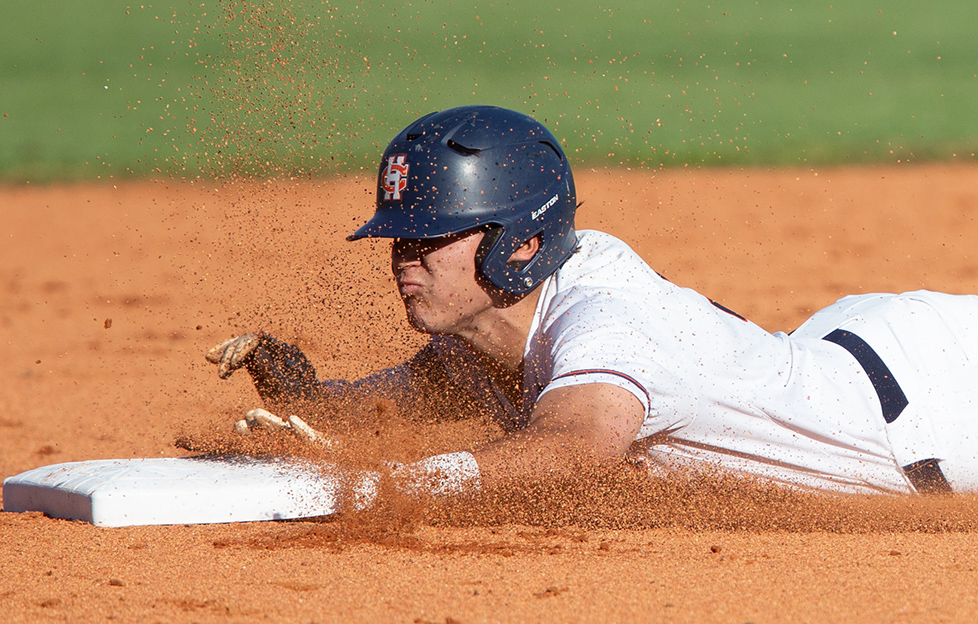 Will Templin slides into third base. (Photo by Dan Smith)

The Charles Henderson Trojans baseball team hung onto an 8-7 win over the Greenville Tigers to pick up their second consecutive area win on Friday.

The Trojans held a 7-0 lead going into the sixth inning when Greenville rallied to score three runs in the top of the sixth. In the bottom of the sixth inning, Brady Huner drove home Parker Adams to extend the lead to 8-3 in a run that would end up being the game-winner.

In the seventh inning, facing two outs, Greenville rallied again to score four runs, including a three-run home run. Just two batters later, Brody Wilks caught a line drive into left field to secure the third out and the win.

Will Templin, Huner and Cobie Cantlow each earned two hits in the win for the Trojans, while Huner scored two runs. Parker Adams pitched six innings and fanned five batters, while giving up eight hits and two earned runs.

The Lady Trojans softball team traveled to Beauregard on Friday and split a pair of games during pool play of the Beauregard Softball Tournament.

The Lady Trojans kicked off the tournament with an 11-1 win over Beauregard as Madison Stewart went 3-for-3 at the plate with three RBIs and three runs. Stella Gilbreath also went 2-for-3 with a home run, four RBIs and two runs. Gilbreath also pitched all four innings, fanning a pair of batters along with giving up just two hits and one earned run in the circle. Dakota Berry had two double plays defensively, while Hannah Sparrow, Madison Allen and Heather Maxwell each had one.

In Charles Henderson’s second game of the afternoon, the Lady Trojans fell to Handley by a score of 7-1. After a hot start to the tournament, Charles Henderson’s bats went cold against Handley with just two hits as a team. Maxwell and Gilbreath each had one hit, while McKenzie Cain earned the lone Lady Trojan run. Sparrow pitched five innings and struck out five batters, while giving up seven hits and two earned runs. The Lady Trojans had six errors as a team.

Troy jumpstarts series with App State with a shutout…