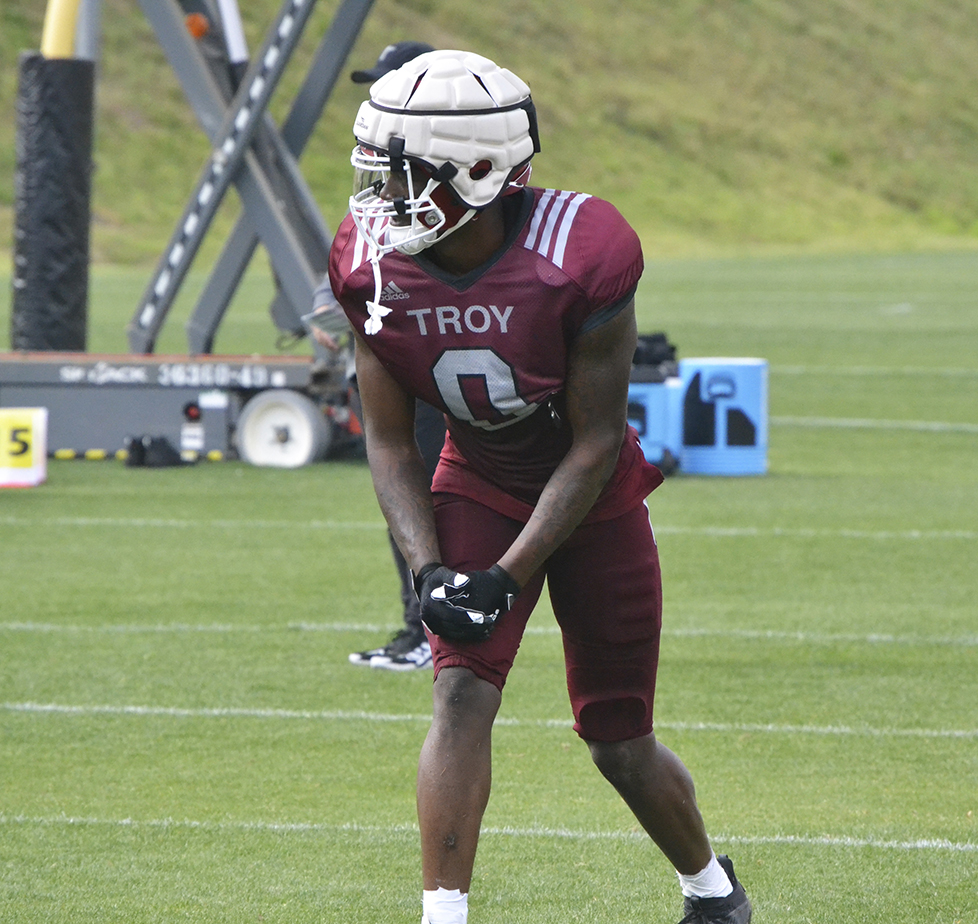 UAB transfer RaJae’ Johnson (0) brings a mix of speed, size and experience to a young group of receivers at Troy. (Photo by Josh Boutwell)

Transferring to a new school can be tough for a veteran football player but Troy Trojans receiver RaJae’ Johnson has already settled into a leadership role during spring practices.

Johnson transferring from UAB was a big win for Troy’s new coaching staff because of the lack of experience returning at the receiver position this season. Johnson and sophomore Tez Johnson are the only receivers on Troy’s roster that have ever started a game in college.

“Coming in, I’m kind of like the oldest guy in the (receiver) room,” Johnson said. “It’s pretty much all about the determination, ambition and working very hard as a senior on this team and trying to lead and fit in with the guys. It was just an automatic click, as soon as I got here, I fit right in with the guys and the other guys really wanted me to be a leader and voice my opinion.”

Troy’s new offensive coordinator Joe Craddock was the tight ends coach at UAB when Johnson was there and was a big reason Johnson said he decided to come to Troy.

“Coach Craddock came when I first got to UAB and I was a little bit heavy then and was in the tight end room and got to sit down and meet Coach Craddock as he was first transitioning in,” Johnson remembered. “Ever since then the relationship grew and after last season, he was leaving UAB and I was getting ready to transfer.

Johnson said that he feels he can fill the void in the Troy offense after the departure of veteran receivers like Luke Whittemore and Reggie Todd from last season.

“Watching film from the last couple of years, losing Reggie Todd from last year is a big key to the team and I personally feel like I can play anywhere,” he said. “For me, it’s all about the small details and I take (getting the details right) very personally in making sure I do everything right and being the best player I can be.”

A struggle for any receiver transferring to a new school is learning a new offense but his familiarity with Craddock has certainly helped that transition.

“It’s a lot similar,” Johnson said of the things Troy is doing on offense compared to UAB. “He has some plays in there that I can relate to from the past few years and he’s using some of his magic and his mind to change up some things.

“A lot of people don’t know or understand that he was one of the youngest (coaches) to go from a (graduate assistant) to (offensive coordinator) and he’s one of the smartest guys I’ve ever met in my career.”

Craddock echoed Johnson’s sentiment of the familiarity to his offense being a benefit to Johnson.

“He brings a lot of experience and he played a lot of football for us in the past,” Craddock said. “He’s an older guy that is experienced, a veteran that knows what to do.

“He knows the offense. A lot of the same stuff we were doing at UAB, we’re doing here. So, he has a good familiarity with it. He also brings a lot of leadership to that room in terms of being a veteran guy.”

Johnson has stepped into a leadership role on and off the field with the receivers and he could even be seen speaking to high school athletes on recruiting trips after practices and giving them advice throughout the spring thus far. Craddock noted that Troy’s other receivers should be applauded for the way they’ve welcomed Johnson, as well.

“He’s fit in really good here,” Craddock said. “He’s been here since January and has gotten in good with those guys and they’ve accepted him. It’s also a credit to those other (receivers) in accepting him in like they have.”

In Troy’s new offense, running the football is a focal point and blocking is a must for receivers.

“Blocking is a major key,” Johnson said. “We always say blocking is all about effort. If you can’t compete and if you have to be coached on your effort that means you’re not enjoying the game and blocking is a big part of the game.

“I’m a big receiver, so I take that to heart and I take pride in that because my blocking defines who I am. If I can help my running backs get going and cheer them on that fuels me, too.”

Craddock said that receivers that don’t block, don’t get many chances in his offense either.

“You have to block first,” he flatly said. “I tell them all the time that you’re not going to get the ball if you don’t block.

“They’ve done a good job with that and (receivers coach) Gary Banks has done a good job about getting that group to be physical and sustaining their blocks on the perimeter. It’s always good when you have a good run but those big runs and those touchdowns come when you’re blocking down the field.”

Johnson helped UAB win a conference championship in 2020 and he said winning another ring is a goal for him but he also some personal goals for the future.

“I won a ring at UAB but I want to win a ring this year, too,” Johnson emphasized. “I want to go out on top and I want to hear my name get called (in the NFL Draft).

Johnson will look to continue to improve as practices continue throughout this week heading into the T-Day Spring Game on April 23.

Former Trojans get set for the new USFL to…