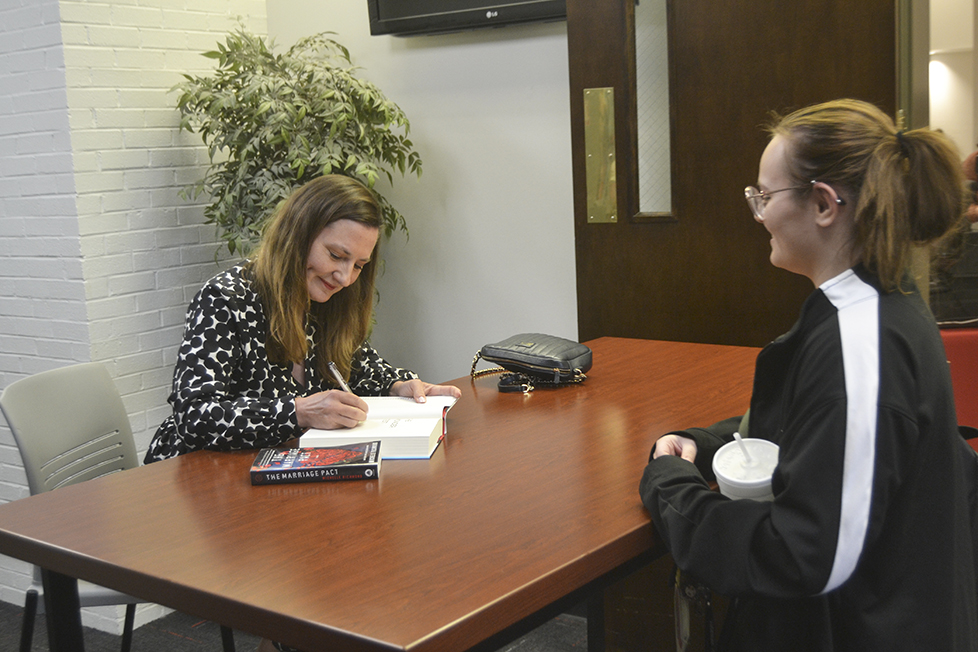 Best-selling author Michelle Richmond made an appearance at Troy University as the recipient of the 2022 Hall-Waters Prize on April 14.

Richmond, a Mobile native, is the author of a number of award-winning and best-selling novels, including 2007’s “The Year of the Fog,” 2017’s “The Marriage Pact” and her most recent book “The Wonder Test,” released in 2021. Richmond, who now resides in California, has won a number of awards during her writing career including the 2012 Catherine Doctorow Innovative Fiction Prize, Associate Writing Programs Award and the Hillsdale Award for Fiction.

The Hall-Waters Prize is presented annually to a person that has made significant contributions to Southern heritage and culture in history, literature and the arts by Troy University. Troy alumnus and author Dr. Wade Hall as a memorial to his parents, Wade Hall Sr. and Sarah Elizabeth Waters Hall, endowed the award.

“This is amazing and I’m so happy to be back in Alabama for this and am so happy to be a part of this group of writers, musicians and songwriters who have received this award (in the past),” Richmond said. “It just means the world to me.”

Richmond spoke to Troy University students at the Trojan Center on Thursday and also took part in a question and answer session quarterbacked by English majors in Dr. Kirk Curnutt’s English 4495 class, who also were responsible for organizing the event.

Richmond’s most recent book, “The Wonder Test,” involves a “high stakes” test that students are required to take in the 10th grade that has ridiculous questions. Each chapter begins with one of the questions on the test. One of Dr. Curnutt’s students asked Richmond about those questions.

“I got a lot of E-mails after the book came out saying they couldn’t figure out the answers to these questions and that’s because there aren’t any (answers),” Richmond said. “The questions are completely absurd. I wanted a structure for the book but I also wanted to have fun with these questions that the students have to answer.

“I started thinking about this book when my son was in elementary school when we would sit at the dinner table – my husband and myself and my son – and we were trying to figure out the answers for the questions on his worksheets. We would just be laughing about it and our family joke was, ‘What is the circumference of brown,’ because there was no answer to it and that’s how the questions were.”

Richmond introduces an FBI agent in “The Wonder Test,” which comes from the fact that her husband has been an FBI agent for more than 20 years.

“I also felt like that I wanted to show what life was really like and the domestic foothold and the toll the FBI life takes on a family and how unglamorous the work really is. (The agent in the book) is a counterintelligence agent, which has been sort of the background noise of my life for most of my adult life.” 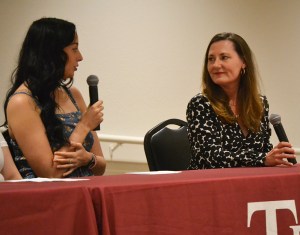 Many of Richmond’s books are set in California – where she has lived for much of her adult life – but the narrators in her books also have a familiar background, as well.

“My first novel in a California setting was set in San Francisco and those beaches are very different from Alabama and the Gulf Coast beaches,” she recalled. “It’s windy, cold and foggy and it was sort of my love letter to San Francisco. It was so much about that landscape but my love of the water came from growing up on the Gulf Coast.

“Even thought its set in San Francisco, the narrator is from Alabama and in a lot of my books that is the case. The characters usually have an Alabama background or at least a Southern background.”

Richmond said that she feels that when someone moves away there is also a push and pull of the past and the future, which impacts her writing, as well.

“Any of you have that moved here from far away, or will move far away from here, you’ll know there is a push-pull, like the waves,” she said. “You’re always looking back at where you came from and you’re always aware of the meaning of that place and the landscape of that place. You’re also pulled to that new place and you’re making a new life somewhere very different than your old life.

“There’s the longing for the past but also the pull of this new life. What happens is your new life becomes your life.”

Richmond spoke to the students about her career in writing, including discussing her writing process, giving advice on picking agents for inspiring authors, the relationship with publishers, how publishing has changed and other subjects.

Richmond said that whenever she travels she always ends up writing a short story about where she traveled to and since she was returning home to Alabama to receive this award, she also read a portion of a story called “Scales” she wrote after a return trip to her hometown of Mobile to the students. Following the event, Richmond and members of the English class took part in a luncheon on the campus of Troy University, as well.