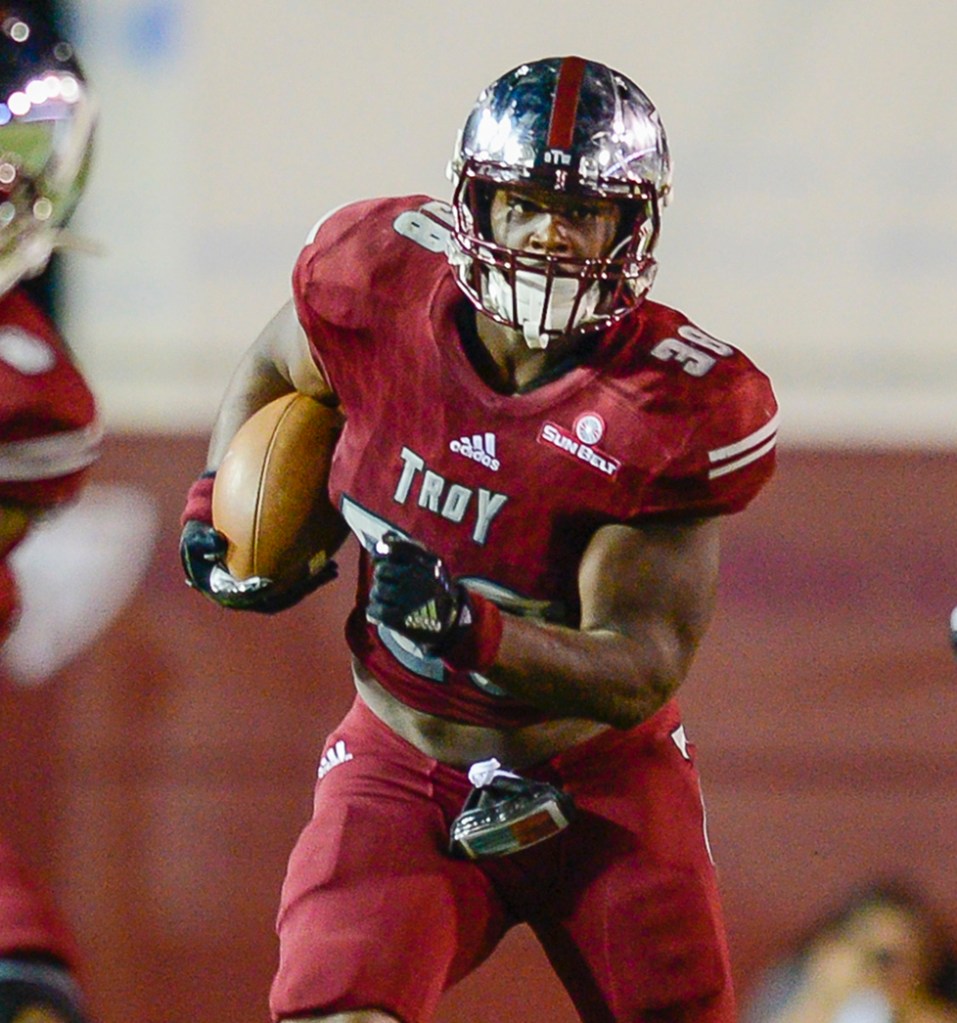 Former Troy running back Jordan Chunn (38) will play for the Birmingham Stallions in the debut of the new USFL this weekend on national TV. (Photo courtesy of Troy University Athletics)

The new United States Football League (USFL) begins play this weekend in Birmingham’s brand new Protective Stadium and a pair of former Troy University football stars will be suiting up.

The original USFL managed to draw in college football names like Hershel Walker, Doug Flutie, Steve Young, Jim Kelley, Reggie White and Mike Rozier along with NFL stars like Doug Williams and Joe Cribbs. The new USFL will not be attempting to go after NFL talent but will instead look to develop younger players that could become future NFL stars.

Helping mold these football stars of the future include former NFL and college coaches like Ship Holtz, Kevin Sumlin, Todd Haley, Jeff Fisher and Mike Riley. With a new spring league comes yet another attempt at a professional football team in the State of Alabama, as the Birmingham Stallions will once again ride in the USFL.

The original Birmingham Stallions were one of the most successful franchises in the original USFL – both on the field and in the stands – drawing some of the highest attendance numbers in the league’s three years and making it to the Eastern Conference Finals in each of its last two years of operation. The Stallions of the 80s were also Southern Division Champions in both 1984 and 1985.

Now, every game in the USFL will be played in Birmingham during the regular season. For its first year of operation, the USFL will play all games at Protective Stadium and legendary Legion Field with the playoffs occurring at Hall of Fame Stadium in Canton, OH due to the 2022 World Games taking place in Birmingham during the month of June. Games will move to each team’s home stadiums in 2023.

The teams that will play during the new USFL’s inaugural season include the Stallions, Houston Gamblers, New Orleans Breakers, Tampa Bay Bandits, Michigan Panthers, New Jersey Generals, Philadelphia Stars and Pittsburgh Maulers. All of these team names are rebirths of names from the original USFL, as well.

The USFL has also done something the original USFL did in terms of bringing in players from local communities to join their respective teams. The Stallions drafted former Troy star running back Jordan Chunn earlier this spring. Chunn set a Troy record of 47 rushing touchdowns during his college career, including 1,288 yards and a school-record 16 touchdowns in 2016. Chunn has played for both the Dallas Cowboys and New York Giants in the NFL since graduating from Troy.

Another former Trojan getting set to begin play in the USFL is offensive guard Steve Rowzee, who was drafted by the Breakers. Rowzee was a two-year starter at Troy after playing at Eastern Arizona before transferring to Troy. He’s played the last two seasons with the Iowa Barnstormers of the Indoor Football League (IFL).

Week 1 of the 2022 season kicks off this Saturday, April 16, with the Birmingham Stallions playing the New Jersey Generals at 6:30 p.m. The game will be nationally televised on both FOX and NBC. The remaining slate of week one games take place on April 17 with the Houston Gamblers playing the Michigan Panthers at 11 a.m. on NBC, the Philadelphia Stars battling the New Orleans breakers at 3 p.m. on USA Network and the Tampa Bay Bandits facing the Pittsburgh Maulers at 7 p.m. on FS1.