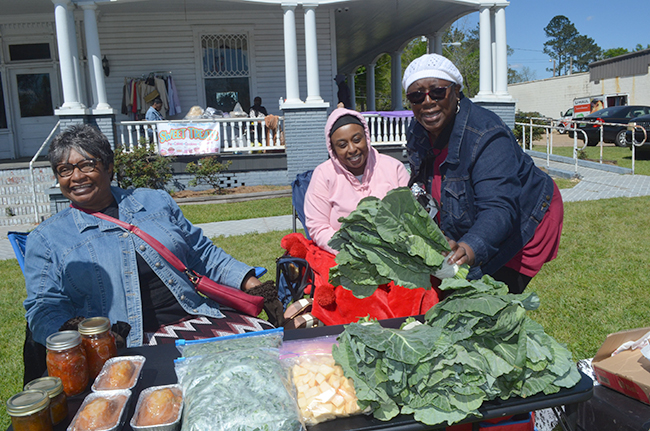 Jaine Treadwell | The Messenger The Robert Boyd family was among the vendors who participated the Brundidge Farmers Market on Saturday in downtown Brundidge. The market will be on the third Saturday of each month during the summer growing season.

For several months, perhaps a year or more, the City of Brundidge has entertained the idea of a local farmers’ market to serve the people of Brundidge and the surrounding area.

“A large number of our residents had mentioned the need for a place where they could buy fresh vegetables and fruits and perhaps sidewalk foods and even arts and crafts,” said Brundidge Mayor Isabell Boyd. “On Saturday, the City of Brundidge  hosted a farmers’ market on the grounds of the former city hall on South Main Street. We had looked forward to the day and were excited that a farmers’ market had become a reality.”

However, the chilly weather and the kite-flying winds were not ideal for the Brundidge Farmers’ Market opening day.

“But I was very pleased with the number of vendors and those who came to market,” Boyd said. “We had vendors from Bullock, Barbour, Coffee and Pike Counties and, of course from here in Brundidge.”

The vendors had a variety of vegetables including collards and rutabagas fresh from the garden.

The Robert Boyd family is well-known as vegetable growers and will be a calling card for the Brundidge Farmers Market.

“Vendors had sweet potato cakes and homemade teacakes, muffins and all kinds of breads and cookies,” Boyd said. “Everything considered, it was a very good opening day for the Brundidge Farmers Market.”

Boyd said as the summer growing season progresses, the Brundidge Farmers Market should attract more vendors, “especially when the tomatoes, corn and peppers are plentiful.”

“Plans are for the Brundidge Farmers Market to be on the third Saturday of the month at the downtown location,” she said. “We invite vendors to join us and everyone to come out and ‘buy local” and support our farmers.”