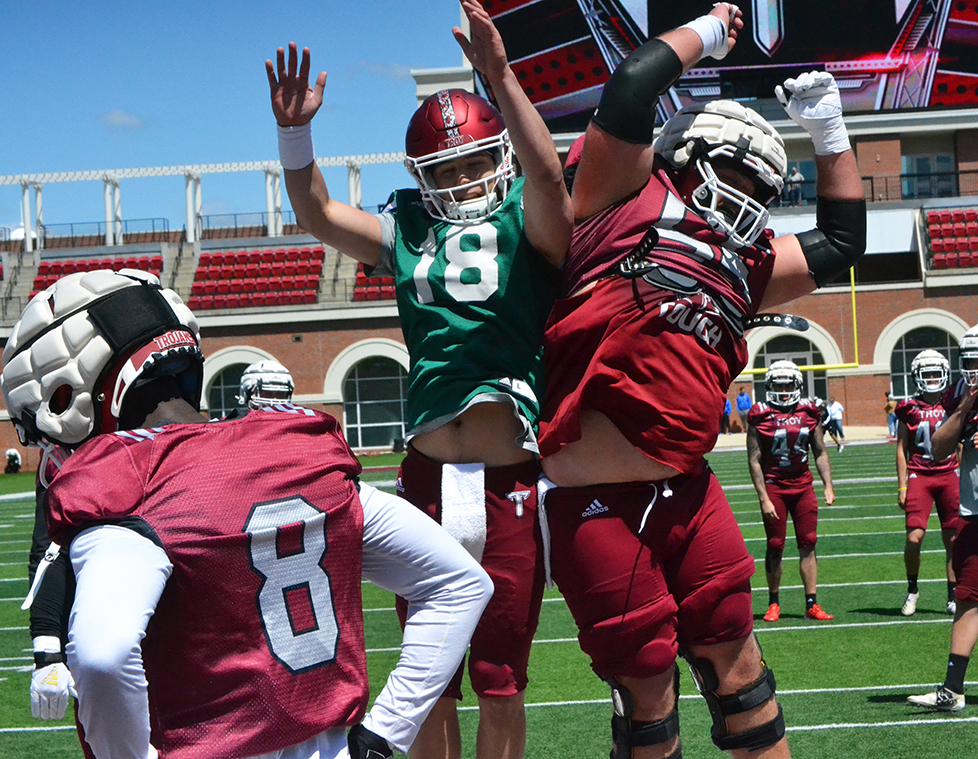 The Troy Trojans football team hosted its second scrimmage of spring practices on Saturday inside a windy Veterans Memorial Stadium.

After not finding the end zone in last week’s scrimmage, the Troy offense managed to battle through gusty winds to find the end zone on two separate occasions. Returning starting quarterback Gunnar Watson led both scoring drives, with Jamontez Woods scoring on a 1-yard touchdown for the first touchdown. On the second scoring drive, Watson threw a 10-yard touchdown pass to junior Marcus Rogers. 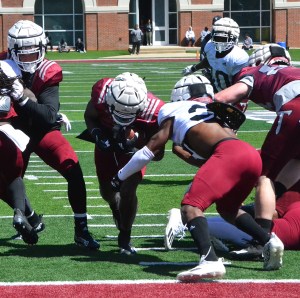 Jamontez Woods (1) powers his way into the end-zone. (Photo by Josh Boutwell)

“We were able to put the ball in the end zone and score a couple of touchdowns, which we didn’t get done last week,” Troy coach Jon Sumrall said. “We still have to protect the ball a little better but I thought the physicality was a little better.

“We just have to be a little more detailed and dialed in on our assignments and alignments offensively and defensively. We got some good work in and I’m excited about the direction we’re going.”

The Troy defense also made a number of plays, including forcing turnovers on back-to-back-to-back drives, including linebacker Jordan Stringer intercepting a Quayde Hawkins pass. Coming into the scrimmage, Sumrall said he wanted to see the offense finish drives and the defense limit big plays. It was mission accomplished for the Trojans on both goals.

“I think we finished a couple of drives better,” Sumrall said. “I thought, in some ways, we were really close on offense to doing even better things.

“On defense, we limited the big plays and I think we made the offense earn it and execute and drive the ball down the field and not give up big plays down the field. I think the offense is understanding better how to stay on schedule, move the football and stay ahead of the chains.”

New offensive coordinator Joe Craddock was also pleased with the improvement his offense made in the second scrimmage.

“We got better today. We actually scored this week,” he said. “We had two good drives last week but didn’t put the ball in the end zone, but we found a way to score on two drives this week.

“We got better today and we have to continue to get better in terms of everybody pulling in the right direction. A lot of the plays are there but we’ll have just one guy mess up and it messes the entire play up. We have to get all 11 guys on the same page and we’ll be alright.” 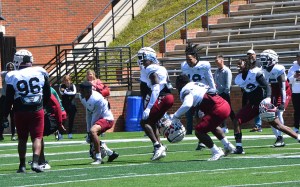 The Troy defense celebrates a turnover. (Photo by Josh Boutwell)

Sumrall pointed to the experience returning on defense as being a big key to the success of the defense, both on the field and off.

“We have a lot of guys on defense that have played a lot of football and have confidence,” Sumrall said. “Even when they aren’t on the field you feel their energy on the sideline, the Carlton Martials of the world.

Despite the defense’s continued success and the offense’s improvement, Sumrall said the team still has a ways to go.

“I think we’re a long way from where I want to be,” Sumrall flatly said. “Our guys understand what the expectations and standards are daily. We’re nowhere near where I want to be and I’m not comfortable or content with anything right now, but we’re working hard and if we continue to do that we’ll get to where we want to go.”