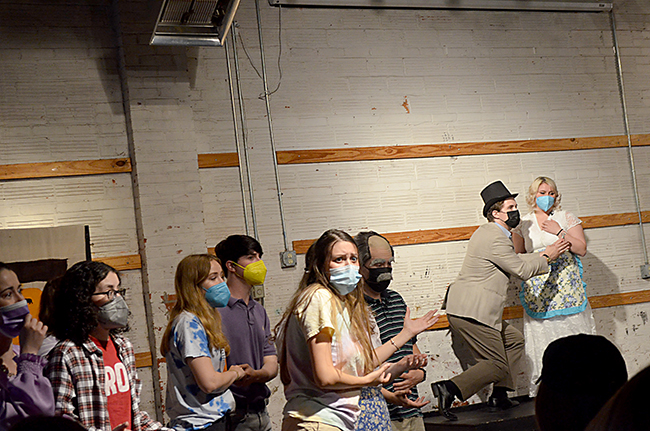 Jaine Treadwell | The Messenger The Troy University Opera Workshop, conducted by Sandra Wee, presented “The Zoo” at The Studio in downtown Troy. “The Zoo” premiered in 1875 at the St. James Theater in London.

Not often do the people of Pike County have an opportunity to attend an opera in downtown Troy.

On Thursday night, the Troy University Opera Workshop, conducted by Dr. Sarah Wee,  presented “The Zoo,” a one-act opera at “The Studio”

“The Zoo” premiered on June 5, 1875 at the St. James Theater in London and concluded its run five weeks later on July 10, 1875, at the Haymarket Theater. So, it has been a long time coming and a long way traveling to arrive at The Studio on East Walnut Street in downtown Troy.

Wee said “The Zoo” is a one-act comic story about two pairs of lovers. First, a nobleman, who goes to the zoo to woo the girl who sells snacks there. He tries to impress her by buying and eating all the food. The other couple includes a young chemist who believes that he has poisoned his beloved by mixing up her father’s prescription with peppermint that he had meant for her. For the rest of the story …. ask the members of the large, well-entertained audience that packed The Studio Thursday night.

At the conclusion of the “The Zoo,” Dr. Phil Kelly, retired Troy University theater professor, took advantage of the opportunity to speak to the performers and to the audience. His excitement and appreciation were unbridled.

“Fantastic,” Kelly said. “Everything about the performance was fantastic — the the soloists, the chorus. Every voice was absolutely amazing! The university should give all of you a raise!

Want a wonderful gift to the community. So wonderfully amazing!”

Kelly expressed appreciation to Dr. Wee for her outstanding leadership and abilities paramount to weaving such an “absolutely ridiculous satire with outrageous characters” into such a fantastic and delightful production.

Brenda Campbell, executive director of the sponsoring Johnson Center for the Arts, was just as complimentary of Wee and the Opera Workshop students for such an amazing performance.

“The opera was, as Dr. Kelly said,  ‘fantastic in every way,”” Campbell said. “The Johnson Center is excited and honored to bring  opera downtown. Tonight we have been well entertain by The Troy University Opera Workshop. “ The Zoo” was delightfully fun and these talented students are … amazingly talented. We thank them for this night.”

Campbell said the JCA looks forward to a continuing relationship with Troy University.

“We are able to enjoy this partnership, in part, because of the generous support of the Alabama State Council on the Arts,” Campbell said. “This is an exciting time for the arts here in our community. We thank Dr. Wee and her students for this amazing performance and all of those who came and enjoyed opera in downtown Troy.”