Edwin Lamar Faulk, a resident of Dothan, Alabama passed away on Wednesday, April 6, 2022 at a local hospital.  He was 82.

Funeral services will be held on Saturday, April 9, 2022 at 11:00 am in Sunset Funeral Home Chapel with Rev. Bob Gross and Dr. Taylor Rutland officiating.  Burial will follow in Sunset Memorial Park.  The family will receive friends at the funeral home for one hour prior to the service. 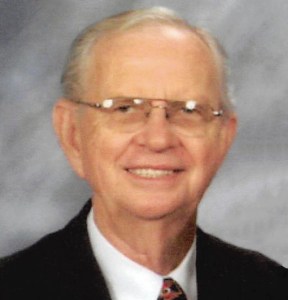 Lamar was born on September 17, 1939 in Crenshaw County, Alabama and graduated from Troy High School in 1957.  He attended Troy University for two years of pre-engineering and married his sweetheart, Brenda Gail Berry, in 1960.  Lamar graduated from Auburn University in 1961 and went to work with the Alabama Highway Department in the Auburn and Opelika area as a project engineer on the Interstate highway system, completing 23 miles of four lane highway I-85.  He spent a year constructing Interstate 65 with Robert R. Dunn Construction of Troy, Alabama.  Following that, Mayor “Jug” Brown of Enterprise offered Lamar to interview for the position of City Engineer for the city.  Lamar spent six very good years working for the city during the height of Fort Rucker’s training for the Vietnam War and the accompanying growth of the city.  In 1973, Sam Marley of Polyengineering, Inc. in Dothan asked Lamar to join their firm of two engineers.  For the next 15 years, Lamar worked on municipal type projects for Dothan, Enterprise, Daleville, Ozark, Troy and Okaloosa County, FL.  In 1989, Lamar and his team were selected to design a live fire tank range on Eglin AFB for the Alabama National Guard.  After design, Polyengineering applied for and was selected to design a $20 million digital tank and helicopter firing range at Fort Knox, KY, the home of Armor.  This was a very large project for a small engineering company and required many days, nights and weekends to meet the accelerated schedule, using early computers to produce large designs.  Because of the amount of work involved in ranges, Lamar stepped down from President and continued as Chairman of the Board.  After construction, Lamar’s Ft. Knox project team was selected as the winner of the 1994 Special Projects category of the Consulting Engineers Council of Alabama annual competition.  This project was also selected as a national winning project by the United States Army Corps of Engineers at a ceremony in Washington, DC.  Because of their “On Time-In Budget” approach, Lamar’s team at Polyengineering were later awarded projects at Ft. Hood, TX, Ft. Polk, LA, Ft. Benning, GA, US Army School at West Point, NY and Ft. Bragg, NC.  Projects were also completed at military bases in Alabama, Alaska, Mississippi, Hawaii, Ohio, Arkansas, Colorado, Virginia and Tennessee.  Lamar’s ranges included all types of live-fire training ranges and totaled over $500 million in construction cost.  Lamar spent his last five years residing at the Terrace at Grove Park, where he was loved and well taken care of.

Mrs. Jennifer Harris McDowell, 75, of Shreveport, died April 3, 2022, at 11:35 pm. A Memorial Service will be held in the First Presbyterian Church Chapel at 11:00 am Saturday, April 9 with a reception following.

Jennifer was born August 3, 1946, the oldest child of Cody W. ‘Hoss’ Harris and Juanita Curtis Harris of Rt. 1 Troy, Alabama. On their farm she grew up with her two brothers, Cody and Mike, and a host of cousins. She graduated in 1964 from Charles Henderson High School, then finished her teaching degree three years later at (then) Troy State College. Jennifer launched her life-long teaching career at Shalimar Elementary School in Florida. In 1974 she met Captain Bryan McDowell, a USAF pilot stationed at Eglin AFB, FL, and they were married on December 22nd that year. After Bryan’s discharge from the military, they moved to Newport, AR where son Miles was born; then to Austin, TX where Bryan attended Austin Presbyterian Theological Seminary and daughter Clara was born. Serving the church together, they then lived in Natchitoches, LA, Erlangen, Germany, and Houston, TX before moving to Shreveport in 1991.

There Jennifer shared her remarkable skills and compassion working with children with special needs, first at Goldman School of the Arc of Caddo-Bossier, then retiring from 81st Street Pre-School. She and her other teacher friends, known as the Ya Ya’s, were a true sisterhood to the end.

Jennifer was active in all the churches where Bryan was pastor, but she especially loved First Presbyterian in Shreveport. Ordained as an Elder, she taught confirmation classes, participated in Presbyterian Women’s events, enjoyed the discussions and fellowship of the Seekers Sunday School Class. Above all she loved the church’s music and singing the hymns and anthems with the Choir under the direction of Dr. Holly Watson.

After her retirement, Jennifer worked part time at the Goldman School, spent every possible minute with her grandchildren, enjoyed traveling around the United States from coast to coast, from Canada to Mexico. Her favorite places to vacation were Destin, Florida and Pagosa Springs, Colorado. She doted on her family, both in Louisiana and in Alabama. She brought peace, happiness and light everywhere she went.

Jennifer was preceded in death by her parents, and her brother, Cody Harris, Jr. She is survived by her husband of 48 years, Bryan; one son, Miles and wife Kathryn; one daughter, Clara Wilkinson; grandchildren, Russell and Emma Wilkinson and Moira and Drake McDowell all of Shreveport; her brother, Mike Harris of Troy, Alabama; cousins, in-laws and nieces and nephews galore.

The family requests that in lieu of flowers, memorials be made to the ARC of Caddo-Bossier, or First Presbyterian Church of Shreveport.

Over the years, many doctors and nurses and therapists helped Jennifer over one hurdle after another. Especially we remember and thank Dr. Scott Wiggins of Advanced Cardiovascular Specialists and the heart failure clinic there.

Rebecca was preceded in death by her parents, Dawson and Louise Loflin, of Henderson.

Her radiant spirit and joy for life will live on in everyone’s memory. She will be greatly missed and forever loved by all who had the honor of knowing her. Until the day we meet again, we celebrate her new life with the Lord and his angels.

In the garden of memory, in the palace of dreams….that is where you and I will meet again.

Lewis Carroll~ALICE IN THE LOOKING GLASS