Energetic Trojans gear up for second scrimmage of the spring 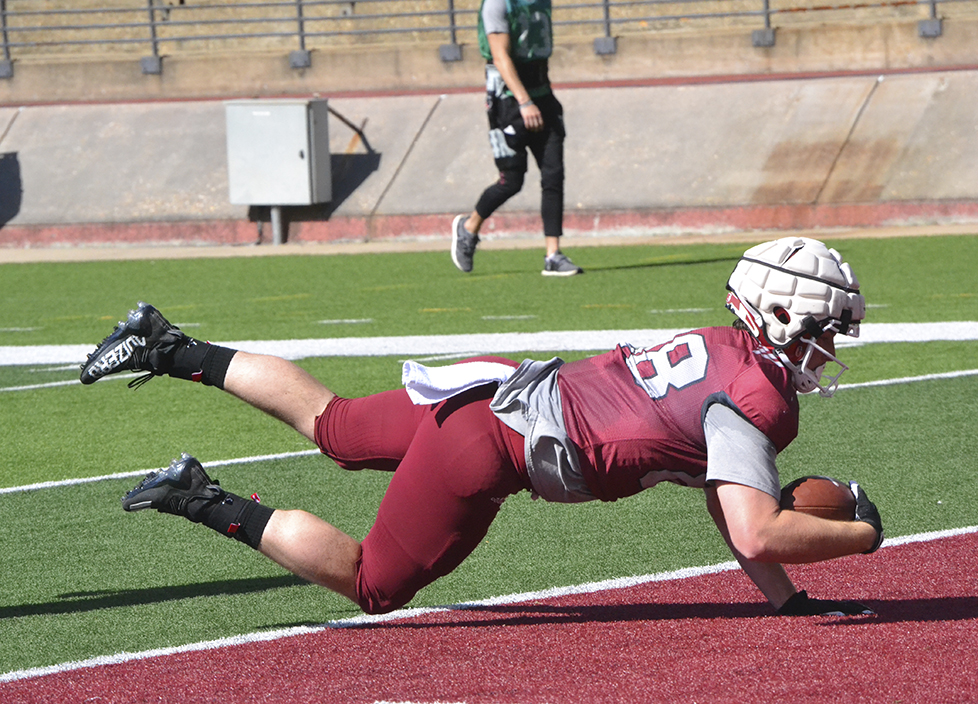 The Troy Trojans football team took to Veterans Memorial Stadium Thursday morning for their final practice of the week before getting back to work with the second scrimmage of the spring on Saturday.

Head coach Jon Sumrall was most enthused about his team’s energy in the Thursday practice.

“I really enjoyed the energy, effort and enthusiasm,” Sumrall said. “I think both sides of the ball, the guys were ready to compete and get better today, which is really encouraging.

“Sometimes you get into the middle of spring practices and the guys hit a little bit of a lull. The energy has been good for us and I’m excited to see where we’re going but we still have a long way to go.”

Troy quarterback Gunnar Watson was pleased with how the offense has responded since Saturday.

“It’s been really good, today the offense came out on fire and we competed really well,” Watson said of the offense. “We were getting after the defense. They had their moments, too, but I feel like we bounced back really well today.”

Troy running back Kimani Vidal is sporting his third different number since arriving at Troy, switching to No. 28 this season. Vidal said that number was his high school number. He also had some positive things to say about Troy’s new run-heavy offense and his fellow running backs.

“I love the new offense,” Vidal said with a smile. “It’s very easy to understand and it will be very explosive. We have a stable (of backs). I love all those guys in that room with me. We love each other and hold each other accountable and lift each other up.”

This Saturday, Troy will scrimmage again but this time the majority of the two-hour practice will be spent in a live scrimmage format, rather than splitting between typical practice periods and scrimmaging like last week. 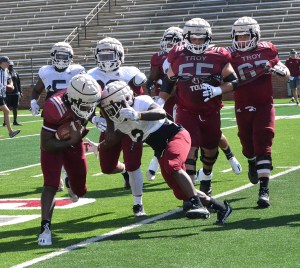 Watson said he wants to see the same fire from he and his teammates on Saturday that they’ve displayed on Thursday.

“I just want to see us compete like we did today with a fire under us and get after it and score some touchdowns,” Watson emphasized.

With the departure of Troy quarterback Kyle Toole this week, the Trojans are down to just Watson, Quayde Hawkins and Will Carn at the quarterback position this spring. In the fall, Brantley’s Tucker Kilcrease will join the team, but he’s been getting a jumpstart on learning the Troy offense by shadowing the quarterbacks during spring practices.

“He’s kind of one of those kids that anything he does, he’s good at it. For him to be able to get here and be a part of practices in terms of watching the operation of things and maybe picking up some of how things are done will hopefully give him a little bit of a jumpstart. He won’t start on third base once he gets here, but maybe he’ll be on first base. He’ll have an idea of what’s going on.”

A number of the Trojan players’ professors were on hand to watch practice on Thursday and see how the players handle things day-to-day, as well.

“I think it’s good for us to engage with the campus and community at large and show the professors and faulty and staff our appreciation for them and what they do for us,” Sumrall said. “Also, we gave them a glimpse of what our young men do. We showed them their schedule and they probably realized those guys do a lot each day. It’s an opportunity to spend time with them and host them and show our appreciation to them.”