The Trojan Tailgaters, the most recent chapter to complete their endowment, are known for their Homecoming Ball and began fundraising efforts about three years ago for the endowed scholarship.

“What an exciting time this is for our Trojan Tailgaters Alumni Chapter, and on behalf of our more than 125 members, we are extremely grateful for this accomplishment,” said Freddie Thomas, the chapter’s president.

“I want to thank the Alumni Association Board of Directors for their support, and all the friends who have supported the Annual Tailgaters Alumni Chapter Scholarship Ball, which really made this a reality,” he said.

Along with the Tailgaters, the Pensacola Chapter and the T-Club completed their endowments recently. 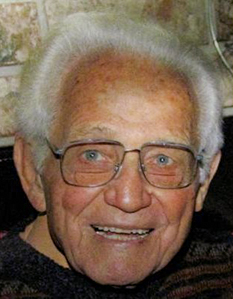 A new scholarship in honor of WWII veteran and former Troy football player Lon Wise has been endowed. (Submitted photo)

The Pensacola Chapter Lon Wise Scholarship combined the efforts of the chapter and the family of one its long-time members.

“Shortly after chartering about 14 years ago, the Foundation challenged us to create an endowed scholarship and we’ve done a golf tournament every year, using some of the proceeds for annual gifts, current scholarships and some for the endowment,” said Steve Timberlake, the chapter’s president.

Timberlake said the family members of Lon Wise wanted to endow a scholarship in his memory, but neither the chapter nor the family were making quick progress toward that goal.

“The family and the chapter decided to get together. It’s a win-win by two different parties in the same area with the same goals,” he said. “We accomplished something that was good for both and allowed the family to reach their goal of supporting students from our area and met the chapter’s goal as well. We were able to achieve what we both set out to do quicker.”

Typically, the chapter awards $3,000 to $5,000 annually in scholarships in Santa Rosa and Escambia counties.

“Now, we’ll be able to give another scholarship with our endowed money,” Timberlake said. “We are hoping that by offering scholarships locally we can get some kids over the hump, and we enjoy seeing the kids TROY is attracting – kids who are SGA leaders, leaders in the church and active in their communities – it’s impressive to see what TROY can attract in quality students,” Timberlake said.

Rounding out the endowed scholarship achievements is the completion of the Eric Mizell Memorial Scholarship, which has been supported largely through a golf tournament hosted by the Lettermen T-Club Chapter, which Mizell helped establish.

“Eric was larger than life in a lot of ways and was always encouraging others to make a difference in the lives around them,” said Julius Pittman, the T-Club’s president. “He was all about creating opportunities for others, and the scholarship in his memory is way we can all keep that spirit of service alive.”

A native of Lucedale, Miss., Mizell came to TROY to play football. He moved back to Troy in 2001 as a wealth manager for Henderson Wealth Management at Troy Bank & Trust and supported the University through his service to the Alumni Association and its board, serving on the Warrior Council supporting Trojan Football. He was involved in various community boards and committees and was a volunteer coach and supporter of Troy Parks and Recreation Department.

“We often hear people talk about the ‘good guys,’” Pittman said. “Our friend Eric should always be included in that group.”

The chapters join a growing list of those that have endowed scholarships, including Archer, Alumni Band, Clipson, Conecuh, Elba, and Emerald Coast chapters.

“These scholarships really enhance the University’s efforts to recruit quality students,” said Alumni Director Faith Byrd. “I am proud that so many chapters have met the achievement of endowed scholarships and adding to their existing scholarships.”