Cattlemen’s Auction brings in the dollars 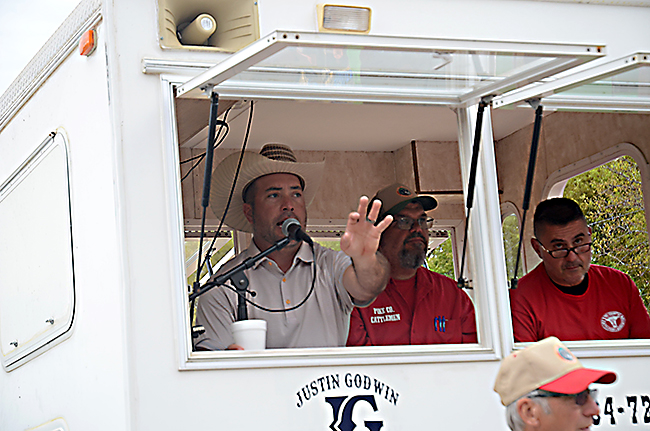 It’s all over… and the Pike County Cattlemen are shouting!

The 2022 Pike County Cattlemen’s Equipment Auction on Saturday is in the books. And it was the biggest and most successful equipment auction ‘by far,” said Cattleman Johnny Garrett.

Garrett said there were 1,642 lots of equipment for sale. Some of the lots had one large item and other lots contained multiple sale items.

“That’s hard to imagine and it’s a lot more than in other years,” Garrett said. “We thought it would be a good auction but we had no idea how good. Every day, people just kept bringing in items.  Thursday at 5 p.m. was the last time to accept auction items and we ran right up to the minute.”

The 2022 Pike County Equipment Auction had everything from large and small farm equipment and cars, trucks and a travel trailer to patio furniture and church pew and pots and pans and a stove to cook on.

“People were bidding and buying all day long,” Garrett said. “One man said he brought back some items he had bought at the auctions years ago and it all sold for more than he paid for it back then.”

Garrett said the sale of all sales might have been a bicycle with two wheels on the back and he was even in the bidding.

And, the Pike County Cattlemen were more than pleased and even more appreciative of those who brought items for the auction block and those who bid and bought and the sponsors who were generous in their support..

“We thank our volunteers for their support , their time and their commitment to the Pike County Cattlemen and our events and projects,” Garrett said. “We thank, too, all those who came just to be a part of the auction. It took everybody to make the 2022 Pike County Cattlemen’s Equipment Auction the success that it was..”

The dollars raised by the annual Cattlemen’s equipment auction support the Cattlemen’’s annual $20,000 scholarship program for seniors at the local high schools and also scholarships in the amount of $9,000 for participants in local calf shows. The Pike County Cattlewomen also award scholarships to locally graduating young women.

The “auction’’ proceeds are used to support the maintenance and upkeep of Cattleman Park throughout the year and any special projects that benefit the Cattlemen and Cattlewomen’s organizations.

“The Pike County Cattlemen cannot thank our extended community for its support of our annual equipment auction,” Garrett said. “The money will be used to support our organization’s events and projects and for our community.”