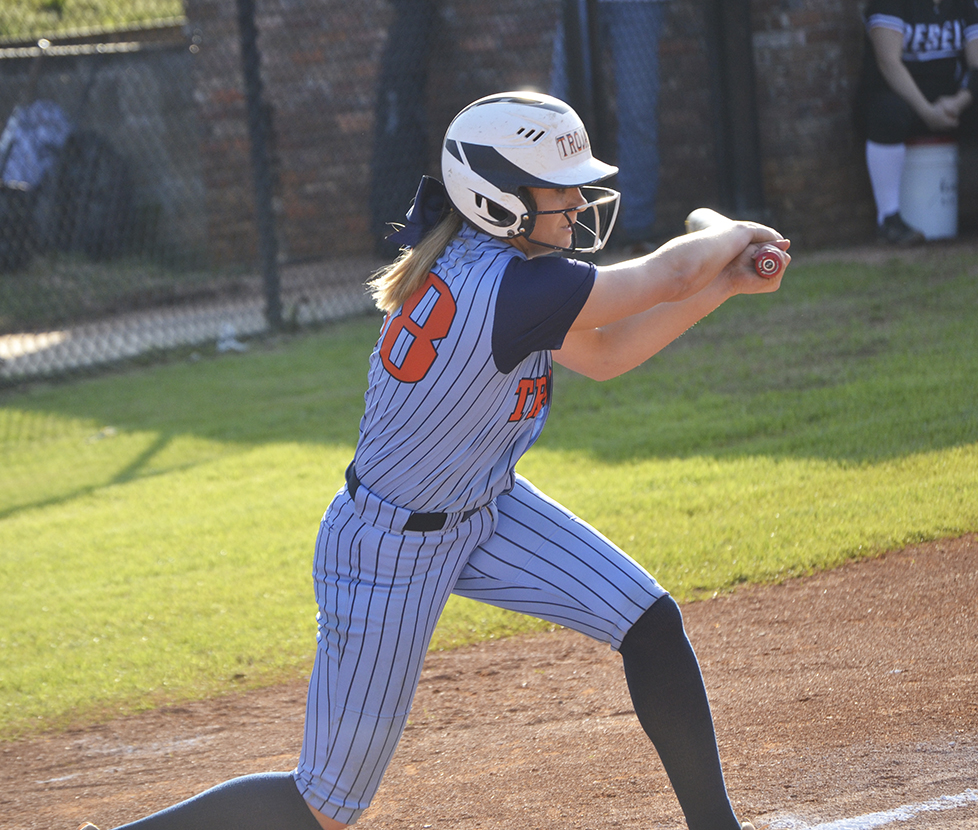 The Charles Henderson Lady Trojans hit the road this weekend to compete in the Pike Road Patriot Classic Softball Tournament.

Charles Henderson lost Geneva and beat Prattville-Christian in pool play on Friday before beating Park Crossing in the first round of elimination portion of the tournament on Saturday morning. The Lady Trojans then were eliminated by Stanhope-Elmore in the quarterfinals later in the day.

Against Geneva, the Lady Trojans got down 6-0 in the first inning before cutting the lead to 6-3 in the third inning. Geneva stretched the lead back out to 9-3 in the bottom of the third. The Lady Trojans scored three more runs in the fifth inning but couldn’t cut the lead any further.

McKenzie Cain led the way for CHHS at the plate, going 2-for-3 with four RBIs, a double, a home run and two runs. Stella Gilbreath pitched four innings and struck out three batters, while giving up seven hits and four earned runs.

Against Prattville-Christian, the Lady Trojans threw a home run party with three CHHS batters going yard on the day. Cain led the way, going 3-for-3 at the plate with her second homer of the tournament, three RBIs and a run. Dakota Berry and Heather Maxwell both hit homers, as well. Hannah Sparrow pitched five innings and fanned five batters along with giving up seven hits and three earned runs.

Against Park Crossing, the Lady Trojans scored 10 runs in each of the first two innings before the game was called falling Park Crossing being unable to score another run in the top of the third inning. Cain went 2-for-3 at the plate with three RBIs and three runs. Maxwell also scored four runs and Savannah Herndon scored three runs, while Gilbreath, Madison Stewart, Molly Garrett, Lakayla Sellers and Olivia Kirkpatrick scored two runs each. Garrett pitched three innings and retired four batters, while giving up one hit and no earned runs.

Against Stanhope-Elmore, Charles Henderson fell behind 5-0 going into the third inning until Cain hit a ground ball double to drive Jada Jones home and cut the lead to 5-1. Stewart hit a fly ball into right field that drove both Maxwell and Cain home later in the inning to cut the lead to 5-3.

Stanhope Elmore extended its lead to 8-3 in the top of the fourth inning. Jones hit a ground ball single to drive Sparrow home and cut the lead to 8-4 in the bottom of the fourth. With the bases loaded, Gilbreath was walked to drive Jones home and cut the lead to 8-5. The Lady Trojans then took the lead when Stewart hit an inside-the-park grand slam home run that also drove Cain, Gilbreath and Maxwell home and give CHHS a 9-8 lead.

Stanhope Elmore tied the score 9-9 in the bottom of the fourth and then won 10-9 when it scored on an error in the bottom of the fifth inning. Cain went 2-for-3 with an RBI and a run, while Stewart went 2-for-3 with a grand slam homer, six RBIs and one run. Gilbreath pitched three innings and gave up seven hits and six earned runs, while Garrett struck out a batter and gave up a hit in one inning in the circle.

During the four games in the tournament, Cain went 9-for-12 hitting with two home runs, 11 RBIs, two doubles, seven runs.