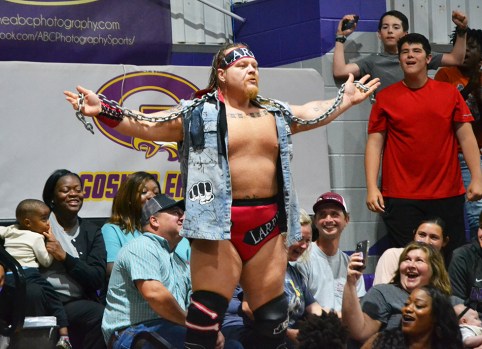 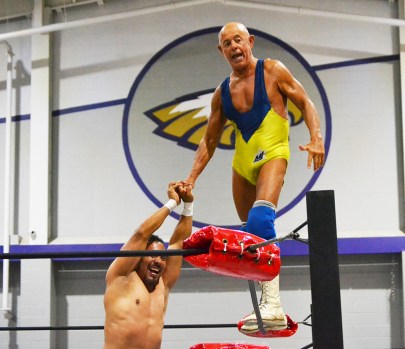 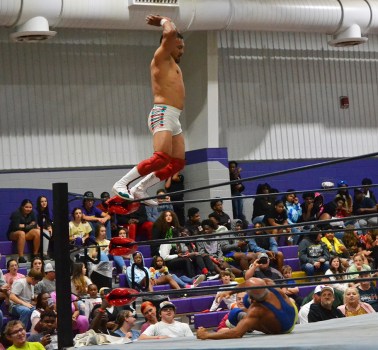 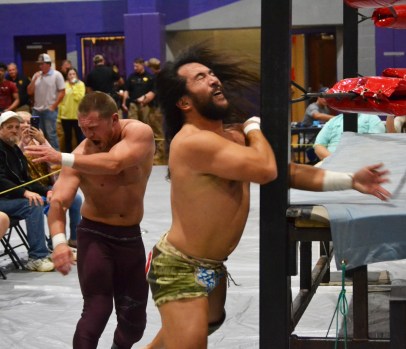 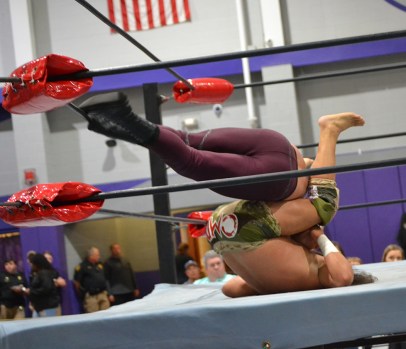 AEW's Priest cheats his way to a win. (Photo by Josh Boutwell) 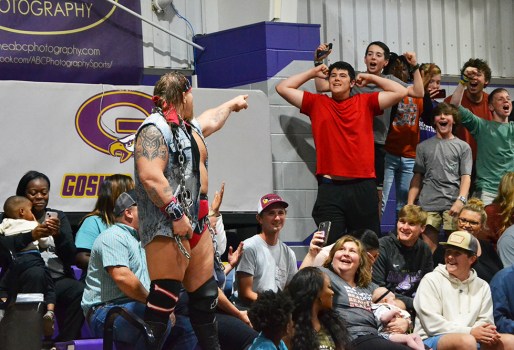 Larry D gets the crowd in Goshen fired up. (Photo by Josh Boutwell) 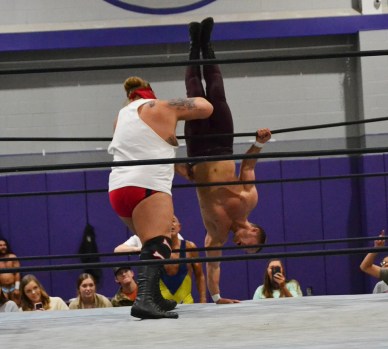 For the first time ever, Goshen saw professional wrestling come to town on April 1, as Goshen High School played host to the “Slam Town in G-Town” event.

The wrestling event was put on by All-Star Wrestling, an independent promotion run by legendary longtime Alabama wrestler “Action” Mike Jackson. Much of the proceeds from the night’s event went to benefit the GHS football and basketball teams.

“I think it went really well,” Goshen football coach Don Moore said. “I think for doing it the first time, you’re always nervous about making money and I just wanted to think outside the box for a fundraiser that wouldn’t cost the community too much.

“We were able to raise a little money and give back to the community in terms of giving them something to do. There’s just not a whole lot going on (in Goshen). I think everyone had a great time and there were no problems or hiccups.” 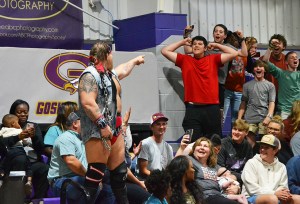 Larry D gets the crowd in Goshen fired up. (Photo by Josh Boutwell)

In the first match of the night, Impact Wrestling star Larry D – a 330-pound former mixed martial artist – faced off against Michael Payne. Larry D picked up the win after hitting the 300-pound  Payne with his KO Punch.

After the match, Larry D commented on his social media that it would be the last match of Payne’s career. Payne was one of the men who trained Larry D to become a wrestler years ago and came out of retirement to have one final match with his student at “Slam Town in G-Town.” Larry D can be seen every Thursday on AXS TV’s Impact Wrestling. 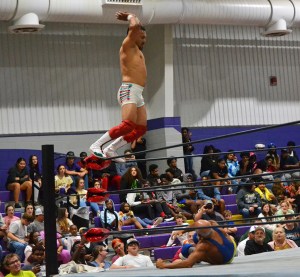 In the second match of the night, Jackson faced off against Mexican high-flyer Antonio Garza in a fast-paced, exciting bout for Jackson’s United States Junior Heavyweight Championship. The 72-year old Jackson wowed the audience being able to still pull off high-flying moves off the top rope and keep up with Garza, who is half Jackson’s age. In the end, All Elite Wrestling’s Adam Priest ran out and attacked both Garza and Jackson causing the match to be thrown out to the frustration of both wrestlers and the crowd alike. Garza and Jackson agreed to team up in the Battle Royal latter in the night against Priest. 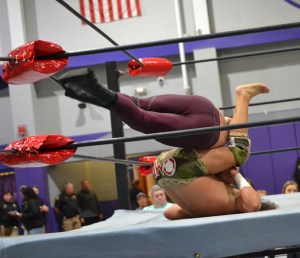 AEW’s Priest cheats his way to a win. (Photo by Josh Boutwell)

In the Semi Main Event, Priest faced Hawaiian wrestler Cabana Man Dan (CMD). After another exciting, fast-paced match, CMD seemingly had the match won with his Flipping Stunner signature move, but the referee said that Priest’s foot was on the bottom rope breaking up the three-count. Eventually, the dastardly Priest rolled CMD up and put his feet on the middle rope, for extra leverage, to cheat his way to a win. Priest can be seen on AEW’s “Dark” show on Youtube every week and AEW’s “Dynamite” that comes on TBS every Wednesday.

In the Main Event, all of the wrestlers from the previous three matches – except for Payne – came back out for an over-the-top Battle Royal in which the winner receives $1,000. The only way to eliminate an opponent was to throw them over the top rope to the floor. After Garza and CMD were eliminated, Priest managed to flip Jackson over the top rope to eliminate him only for Larry D to then toss Priest over to win the match. 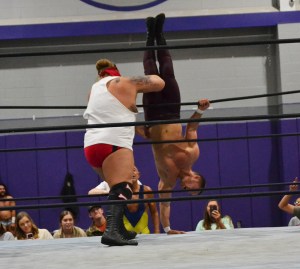 “All in all it was good and enjoyable for everyone,” he said. “It’s something we’re going to keep in mind every year that we’re having a fundraiser. It’s great for everyone; everyone gets something out of it. It’s not just asking everyone for money. You’re paying to watch some guys put on a show, and I think they did a really great job.”