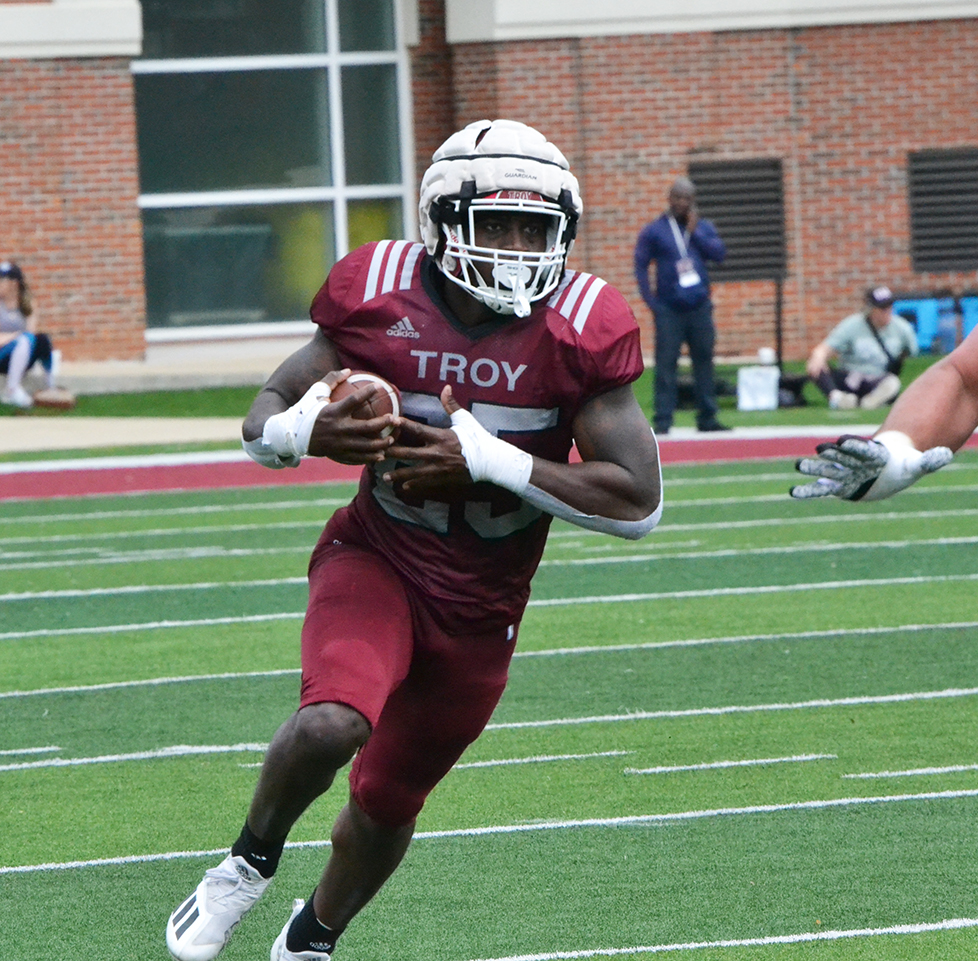 The Troy football team practiced inside Veteran’s Memorial Stadium for the team’s first scrimmage of spring on Saturday, April 2, and the Trojan defense was dominant at times.

Troy spent half of practice time scrimmaging and the other half working in individual group drills like a more typical practice. Head coach Jon Sumrall was up front about who he thought had the advantage during the day.

“I thought the defense won the day,” Sumrall flatly said. “They attacked the entire practice with energy, enthusiasm, passion and intensity.

“The offense was behind and at times that’s going to happen. We’re putting a lot of new things in and working on some install stuff. Working through the installation piece we didn’t play as fast or physical as we need to and our defense looked really good. Our offense has to match that tempo and enthusiasm.”

During the scrimmage, Watson marched the first offense down the field before bogging down around the 35-yard line. Watson looked to have a sure-fire touchdown to tight end Michael Vice, but safety Craig Slocum made a big hit at the goal line to break up the pass. Quayde Hawkins converted a third-and-long on his first possession but threw an interception to cornerback Taiyon Palmer inside the defense’s 20-yard line. 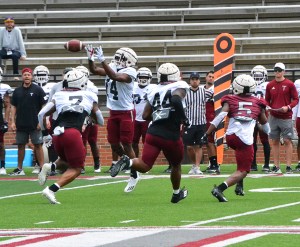 Caleb Ransaw intercepted Watson on the next possession but a penalty on both sides of the ball negated it. A third-down sack ended the drive, however. Hawkins converted another third-and-long when he scrambled and heaved a beautiful pass to receiver Devonte Ross for a 30-yard pickup. Hawkins also converted a fourth down on the drive before the offense bogged down again and he was sacked on third down. Neither Hawkins nor Watson was able to lead scoring drives during the scrimmage.

“I thought they were both good at times but we forced some balls that we have to be smarter on with some throws,” Sumrall said of his quarterbacks. “We have to be more efficient on the play calls and getting the play calls in quicker and helping them be more confident at the line of scrimmage.

Sumrall once again reiterated that all positions are being competed for at Troy, including the quarterbacks.

“Every job is open for competition,” he emphasized. “When I came in I told the whole team that nobody has their name on a job. Everyone has to earn their job.

“Right now I’m not really concerned with who goes with the ones or twos (at quarterback). We’ll move them both up and down at times just to put them with a different group. You have to be ready to play more than one quarterback, too, just because you don’t know what’s going to happen. We have to develop both those guys, so that they can be the best they can be and then we’ll evaluate, as we move forward, who gives us the best opportunity to win once we get closer to the season.”

Troy’s new offensive style was also in full effect as the Trojans pounded the ball for much of the scrimmage. Running backs Charles Strong, Kimani Vidal, Jamontez Woods and Damien Taylor all made plays throughout the practice and scrimmage. New offensive coordinator Joe Craddock said that there will be no question what style of football the Trojans will play with in 2022.

Strong transferred to Troy from Texas A&M in 2019 but last season the 6-foot-2-inch, 237-pound Florida native was moved to linebacker. Craddock and Sumrall moved Strong back to his natural position at running back and he seems to be flourishing in Troy’s new downhill running game.

“I’ve seen a lot of good things out of Charles and obviously we have Kimani and Demontez in there, too,” Craddock said of his running backs. “We recruited him when I was at Arkansas and he ended up going to Texas A&M on us, so it’s good to be able to have a big back like that to be able to hand the ball to. He’s hard to tackle over and over and over, he just punishes people.”

Hawkins said that he especially likes the new style of offense Troy is playing with, as well.

“When I first got here I wasn’t comfortable at all in the offense, so I like that I have a fresh new start with a new coaching staff,” he said. “We’re going to run the ball a lot on offense. They told us that from the get go.

“I’m encouraged,” he said. “Our guys are working hard and they’re getting better but we have a long way to go. The attitude and effort they’re bringing every day is outstanding. If we keep doing that we’ll keep making progress and that’s the name of the game. I’m really proud of how they’re working every day.”

Wood said he’s been especially pleased with the leadership that not only his veteran players have been showing but younger players, as well.

“Any time is a player’s team, so when you have players with great character and leadership qualities and work ethic they’re the guys taking charge,” he said. “It’s not just those (veteran) guys, though. We see guys developing as leaders from freshmen all the way up to our senior class.

“Overall, we’re really proud of how they’re buying into the culture that Coach Sumrall is instilling in our program whether it’s veteran guys like Carlton (Martial) or the younger guys on the team.”

A number of former Troy football players were in attendance for the scrimmage and spoke about what Troy Football means to them to the current Trojan players after practice.

“The history of Troy Football speaks for itself,” Sumrall said. “I think the success of the program throughout the years and what this program has been about is championships and competing at a high level.

“I want our guys to understand the guys that came before them and have an appreciation for what’s come before us. Those guys are always welcome and I am very grateful for their interest in coming back. We’re very fortunate to have a group of lettermen and former players that are interested in coming back and what we’re doing.”

Troy will move Tuesday’s scheduled practice up to Monday morning instead to miss the possibility of rain on Tuesday.