A south Alabama woman is behind bars after allegedly robbing a bank in Troy. 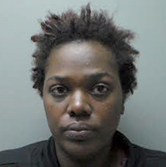 Barr said officers responded to a reported bank robbery at Regions Bank, located in the 800 block of George Wallace Drive, on Wednesday. Officers were advised the suspect was driving a blue KIA with no tag and which direction the vehicle was traveling. Barr said officers located the vehicle on Park Street and attempted to conduct a traffic stop. Barr said the driver of the vehicle refused to stop and led officers on a pursuit through several neighborhoods until the driver wrecked the car. According to Barr, the driver fled on foot and officers found the suspect hiding under a storage building on Dendron Avenue.

Thornton was taken into custody without further incident and was processed at the Troy City Jail and and later transported to the Pike County Jail on $150,000 bond, according to Barr.

The case is still under investigation by the Troy Police Department and the Pike County District Attorneys Office.