Troy Football in search of its new center 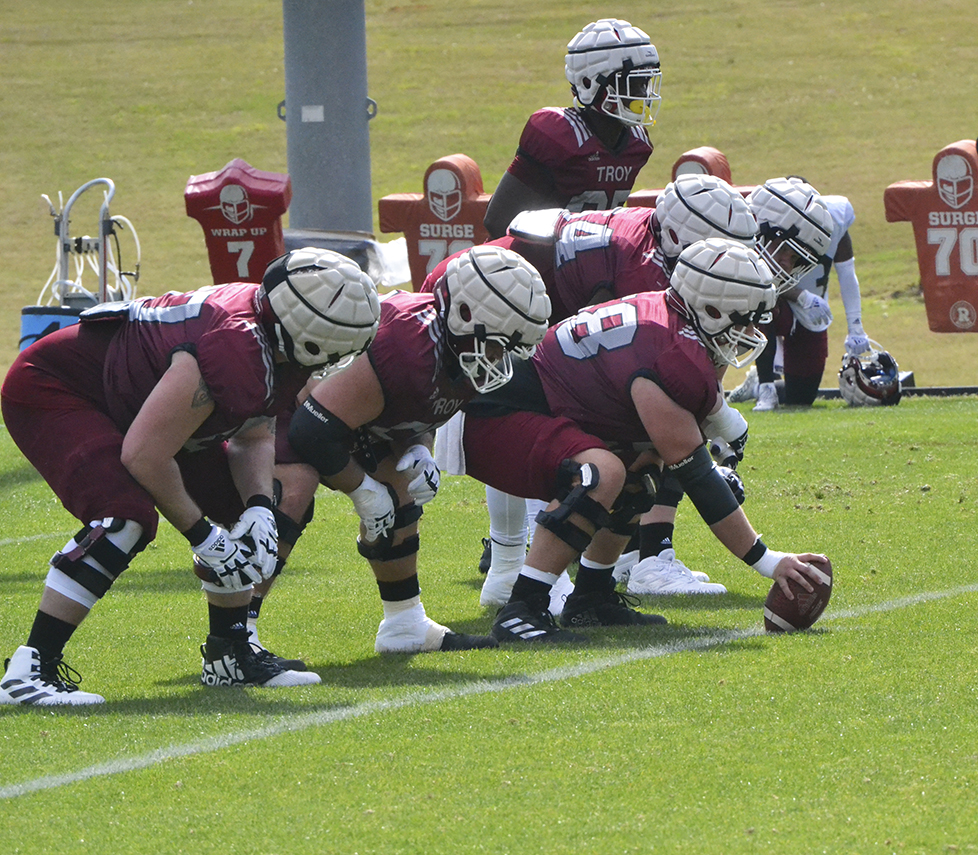 Jake Andrews (58) has been an all-state offensive guard at Troy. (Photo by Josh Boutwell)

When a team has a solid starting center, it sometimes can go unnoticed, but when a team doesn’t have that position solidified it becomes very evident. Whether it be snaps that go over the quarterbacks head, snaps that roll on the ground, mistimed snaps or miscommunication along the offensive line, the center position is where everything on offense starts.

“The center starts everything we do, whether it be setting protections or targeting things in the running game to snapping the football. When a (defensive tackle) covers up the center, he not only has to snap the football but he has someone on him immediately, so he has to be ready for a fist fight as soon as he snaps the ball. There is a lot on that position and that position is vital to any team. The whole play on offense starts with him.”

For the past six seasons, the Troy University football program has not had to worry about who was snapping the football. Deontae Crumitie was a starter at center from the minute he stepped foot on campus in 2015 and quickly became an All-Sun Belt center. Playing next to him as a starting offensive guard in 2018 was Enterprise native Dylan Bradshaw. Following Crumitie’s graduation in 2018, Bradshaw took over as starting center in 2019. From that point forward, Bradshaw had the center position locked down and earned All-Sun Belt honors himself. Now, someone new will have to fill that role following Bradshaw’s graduation. Sumrall said all possibilities are being considered during the spring.

“We’re training as many guys as we can to create depth there,” Sumrall said. “We’re constantly trying to figure out who our best five (linemen) are and then within that, who all can play center, because it’s a unique piece where you can’t just roll a guy out and plug him in.

Among those players getting reps at center this spring is All-Sun Belt offensive guard Jake Andrews. While he’s spent the majority of the past three seasons at guard, he also played center some as a freshman and even started when Bradshaw was injured late in the year in 2019.

“Jake has been doing some good things there,” Sumrall said. “He’s really comfortable at guard but we’ve run him a little at center, as well.

“I think it’s only helping him get better at his craft. He really does everything you ask him to do. Physically he dominates and he sticks out in the offseason program because he’s a big guy that moves extremely efficiently and extremely well. We’re trying to put something on him by playing center. Is that where he’s going to play in the fall? I don’t know that yet but we’re trying to figure out what puts us in the best position to be successful.”

Andrews reiterated that he’d do whatever he can to help the team be successful.

“Whatever they want me to do, I’ll do it,” he emphasized. “I’ll play tight end if Coach (Evan) McKissick needs me to. Whatever is going to make us better is what I’ll do.”

Andrews pointed to Bradshaw as being one of his mentors and said that his time playing next time him has helped with learning the center position.

“I love Dylan,” he flatly said. “We talked about it last year that I don’t think either of us have ever played more snaps beside anyone else than each other.

“He’s been of the best guys I’ve ever been around in terms of being able to pick his mind and ask him things. I consider him a mentor even though he’s only a few years older than me. He’s one of my best friends and a mentor and I really appreciate everything he’s done for me.” 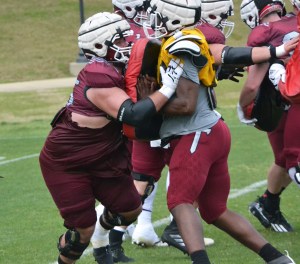 Logan Self (55) was an All-USA Today center in high school. (Photo by Josh Boutwell)

Redshirt sophomore Logan Self is also getting reps with the first team offense during the spring. He’s only played in three total games during his Troy career so far but he was a USA Today All-USA player at Hewitt-Trussville in high school. Also in the fray is sophomore Jeremiah Frazier, who transferred to Troy this January after spending his freshman season at Tennessee State. The Pike Road native was the Ohio Valley Conference’s Newcomer of the Year after starting all 11 games in 2021.

“I have a good relationship with all of our guys and there is no ill will there at all,” Self said of the competition at center. “We’re all on the same team, we all play for Troy and the best player is going to start and that is what it is.”

Frazier said the competition at Troy has certainly been different than what he’s ever faced before.

“It’s pretty competitive,” he said. “It’s a lot different than I expected. The guys are bigger and I have to process things quicker than I’ve normally had to.”

Andrews said he doesn’t look at it like a competition for the center position, however.

“We’re all meeting together and talking about plays and getting extra time in studying and discussing and helping each other out,” Andrews said. “It’s never really been a battle of hatred or any collusion of wanting anyone else to do bad. We all want everyone to do their best and it may sound corny but whatever is going to be best for us, as a team, is what we all want.”

Along with competing with each other at center, the players are learning a new offense under new offensive coordinator Joe Craddock. All three of the players competing at center said they’re enjoying the offense, though.

“It’s definitely more downhill running the football, pounding the rock,” Self said. “We’re really emphasizing that’s the most important portion of the game and how being able to run the ball can really control how the game is going to go. That’s probably been the biggest difference, a lot more tight ends and 11 and 12 personnel. It’s been really cool to see that.” 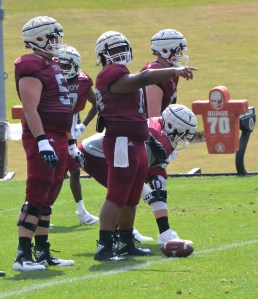 Jeremiah Frazier (78) was the OVC Newcomer of the Year at Tennessee State last season. (Photo by Josh Boutwell)

Frazier said that Tennessee State played more under center in a “pro-style” offense, so he’s also been transitioning into more “shotgun” snaps at Troy.

“Really I’ve been snapping both ways since I was younger,” Frazier said. “It’s just about being more accurate with my snaps, placing them on the chest instead of down closer to the ground.”

The linemen are also adjusting to learning from a new coach on the line, as longtime NFL assistant Cole Popovich has taken over there.

“It’s a lot different style than what we’ve had traditionally here at Troy,” Andrews said. “We’ve had a lot of good offensive line coaches here but it’s interesting to see the difference between the college and NFL mindsets.

“He has a hard-working, hit them in the mouth kind of mindset. A guy like me that came from a primarily running high school loves it. It’s awesome and he’s one of the smartest coaches I’ve been around and I’ve been around a lot of really smart coaches previously.”

Andrews said that his snaps are something he has to get down better moving forward, if he’s going to play center.

“If you turn on the Alabama-Mississippi High School All-Star game from my senior year, I played center in that game, I rolled about four strikes back there,” Andrews joked. “My snaps, communicating and learning all the calls, getting us all on the same page and working as a nickel instead of five pennies is what I need to focus on this spring.”

Self pointed to a number of things he wants to improve on this spring.

“I would definitely say playing low with my pad level, is something personally I want to work on and continuing to perfect the offense and lead those guys and pushing all our dudes to learn the offense,” he said. “I want to make sure we’re getting all the little details down in what we’re doing and why we’re doing it.”

Andrews, Frazier and Self along with the other players on the line will continue to work on their craft heading into T-Day scheduled for April 23 before heading into offseason workouts.