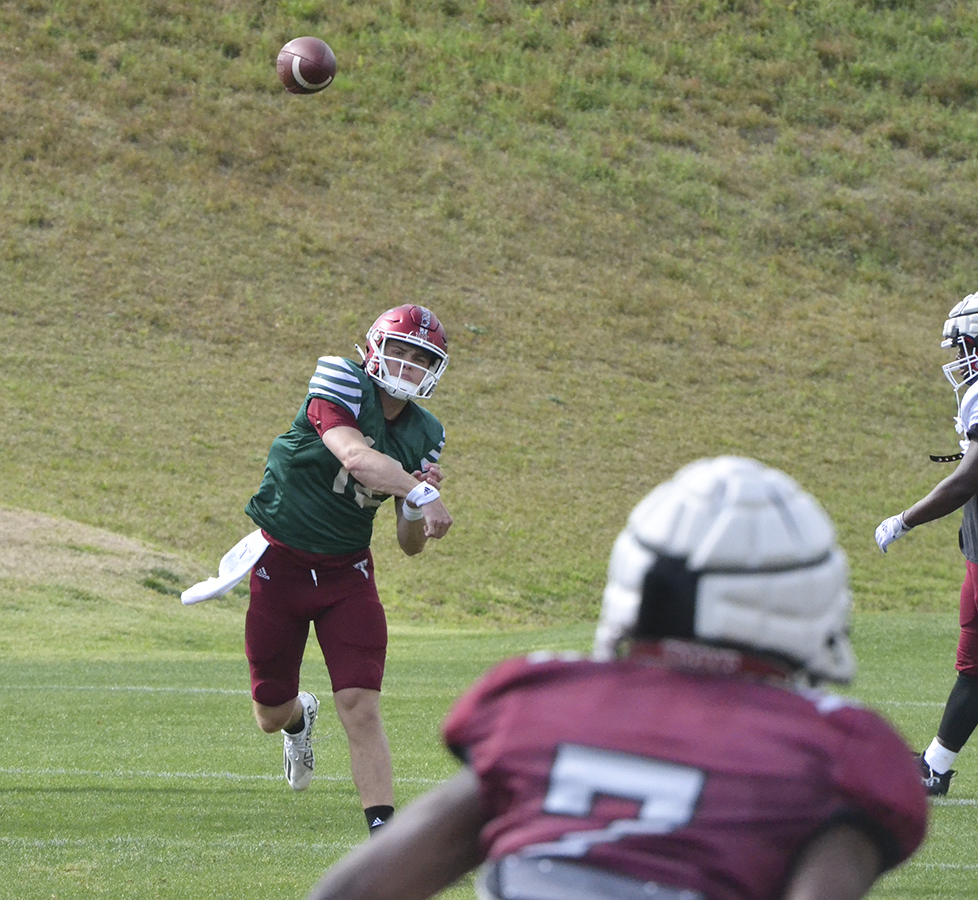 The Troy Football team went back-to-back days for the first time during spring practice as head coach Jon Sumrall altered the Trojans’ schedule due to the threat of inclement weather moving into the Troy area later Wednesday evening.

Sumrall said his team responded to a second consecutive practice with one of their best practices of the spring so far.

“I told the guys before practice, and we talked about it yesterday after practice, that there was a little bit of a lack of enthusiasm or energy (yesterday),” defensive coordinator Shiel Wood said. “We challenged them today to come out with more enthusiasm and energy and to understand how lucky we are to be here at Troy and to be in this position – to be a coach in this organization and a player in this organization – and I thought they responded to that message as a team, and I was really proud to see that.”

Due to earlier classes scheduled on Wednesdays, Troy moved times up earlier for today’s fifth practice of the spring, but the Trojans were still able to get their full two hours in over 12 periods. There is still a heavy emphasis on scheme implementation and teaching throughout the day.

“We’re putting a lot on them; we’re putting a pretty good bit of install in,” Wood said. “There is a good bit of learning that is going on. Of course, with that there are some mistakes, but that is part of the process.

“I also like the mental effort that our guys are putting in. These guys are hungry to learn, they are coming in extra on their own, and I really appreciate the effort that they are giving us. We are making progress, we’ve got a long way to go, but we’re headed in the right direction.”

One of the guys who will be called upon to make plays on the defensive side of the ball is senior spear T.J. Harris, who is coming off a career year. A third team All-Sun Belt selection, Harris led Troy’s secondary with 58 tackles last year and led all secondary players in the Sun Belt with 6.5 tackles for loss.

“We came out with energy and focus today,” Harris said. “My personal goals are team goals; I want a conference ring and I want to go to a bowl game; that’s what I want for the team. We are a relentless defense; we play fast and physical and get to the ball.”

Troy will be off for the next two days before returning to the practice fields Saturday morning, where the Trojans will face their first scrimmage situations of the spring. Practice is slated to begin at 10:30 a.m.