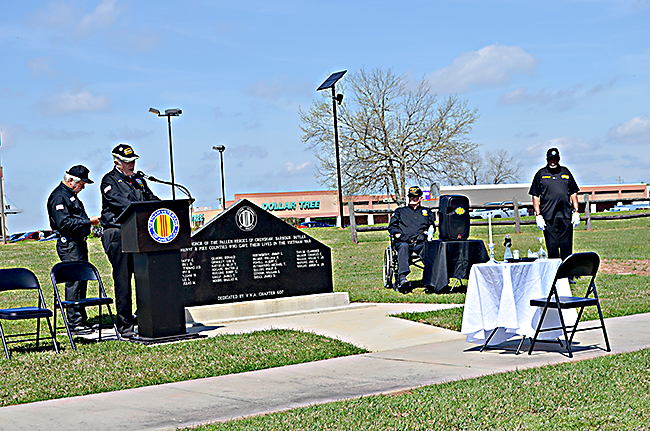 The Vietnam Veterans of America Chapter 607 conducted a rededication service Tuesday for the Vietnam Memorial marker at Troy’s Bicentennial Park. The marker was dedicated on November 12, 2018 and destroyed during a weather storm a year later.

The marker honors the fallen heroes of Crenshaw, Barbour, Butler, Henry and Pike County who gave their lives during the Vietnam War.

Jessie Donaldson, Vietnam Veterans of American Chapter 607 president, said the marker honors the 26 Vietnam veterans who gave their lives in service to their country.

“Only the dead have seen the end of war,” Donaldson said. “Peace comes through strength. These 26 Vietnam veterans died in service to their country. May they rest knowing their service was not in vain and, in the knowledge, that they laid down their lives for their friends.”

Donaldson said the significance of having the Vietnam Memorial marker dedicated on March 29, was that it was on that date in 1975 that the United States left South Vietnam.

Troy Mayor Jason A. Reeves said having the Vietnam Memorial at the Bicentennial Park is a reminder of the supreme sacrifices made by Vietnam veterans and also honors them.

The Vietnam Memorial Marker Rededication Ceremony included The Fallen Comrade Table setting, which honors America’s fallen soldiers. Donaldson said the table is symbolic of a soldier’s willingness to lay down his life for his country.

“The white tablecloth is symbolic of the deceased soldier’s intentions in responding to his County’s call to arms; the red rose is a reminder of the family and friends who keep the faith,” Donaldson said. “The black represents the heavy heart felt at the soldiers’ loss and the slice of lemon represents the bitterness a soldier sometimes has to endure.”

The salt is sprinkled on the plate to symbolize the countless fallen tears of the soldier’s family and friends, Donaldson said. An inverted glass represents the fact that the soldier can no longer partake with others.

“A lit candle is the light of hope to illuminate the soldier’s journey to his Final Post and the empty chair shows that he is no longer with us,” the Chapter president said and ended with the prayer that a fallen soldier may always have a place in his/her home and rest in peace and in perpetual light.

The service ended with the playing of Taps.