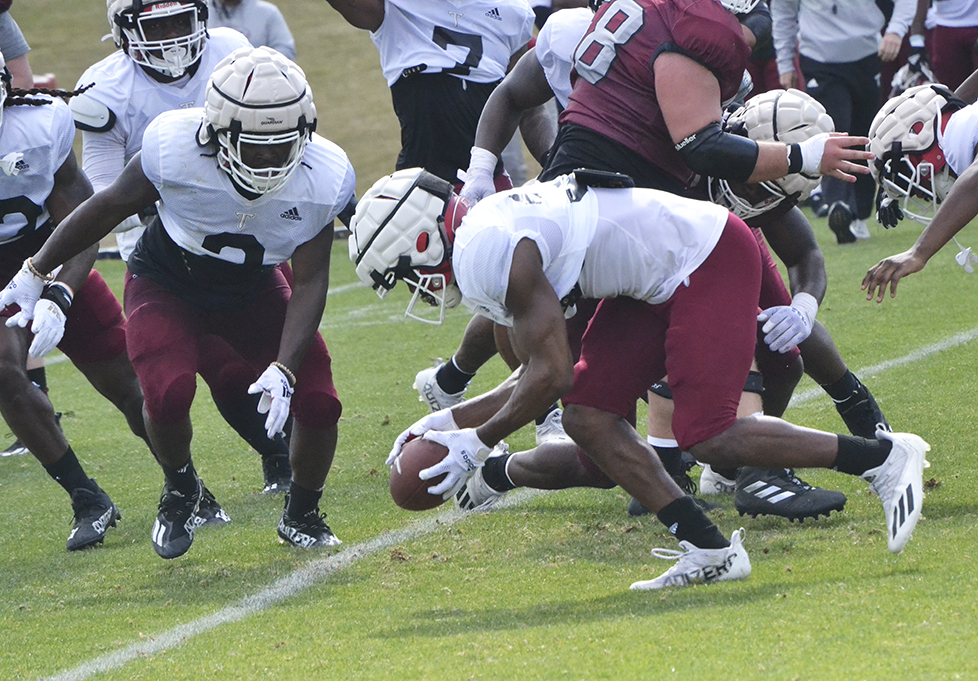 Troy cornerback Josh Brown (24) scoops up a fumble during practice on Tuesday. (Photo by Josh Boutwell)

On day four, Sumrall pointed to the teams energy – or lack thereof – for much of practice as being something he wants to clean up moving forward, especially on the offensive end.

“We have to get tougher mentally as a team and we have to learn how to practice the right way all of the time,” he said. “There was some ebbs and flows (of practice) and we have a long way to go.

“We’re not near where we want to be but we’re going to get there. The guys have to buy in to the standards of how we’re going to practice and understand what we’re asking them to do will help them be successful.”

Redshirt freshman center Logan Self also pointed to the team’s energy level as being something that needs to improve tomorrow.

“We talked about having ‘day four energy’ and that’s kind of how it was today,” Self said. “We’re looking for that ‘day one energy.’ Everybody can get excited about the first day but it’s not that easy the further it goes on.

“I definitely think we picked it up towards the end of practice, though. I think we’ve gotten a lot better since day one but we have a long way to go for sure.”

“It was a little hot today and I think we were a little down with our energy,” Andrews said. “The offense started kind of slow but I think we picked it up at the end. We have a lot of things to work on but (spring) is going good so far.”

The defense made a number of plays during 7-on-7 and 11-on-11 sessions, including forcing turnovers. Sumrall applauded the defense’s energy but said there were still some things to clean up.

“I thought the defense had great energy but I think they have to be a little more detailed and dialed in on some of the techniques we’re asking them to do and their alignments,” Sumrall said. “You can’t give up explosive plays by being in the wrong leverage or wrong position, especially in the secondary with our safeties.

“It’s great to see our guys get their hands on some balls and create takeaways but we also have to do a whole lot better job of taking care of the football on offense.”

A point of emphasis for Troy coaches during the spring has been any time a ball hits the ground, everyone is expected to run to it.

“We were way too loose with the football today at times and I kind of saw it in pre-practice with how our offensive guys came out in the initial part of practice,” Sumrall said. “I felt that. We have to protect the ball better but the defense is doing a good job of attacking to the ball and putting a big emphasis on getting to the ball when it’s on the ground.”

Sumrall said that the Trojans would continue to install new aspects of the offense and defense throughout the spring.

“We’re constantly fine-tuning everything we’re putting in but we’re never done evolving,” he emphasized. “We’re going to add layers to everything we’re doing and every day will have some kind of install.

“We don’t have enough time with 15 practices (during the spring) to take a whole day where we don’t install something. There will be heavier days and lighter days, like on scrimmage days we’ll back off on the install piece a little. We’re constantly going to be adding volume and at times seeing how much our guys can handle.”

Troy will switch things up tomorrow and practice on Wednesday, instead of the planned Thursday due to the threat of weather. Sumrall also said Troy plans to scrimmage some during Saturday’s practice.