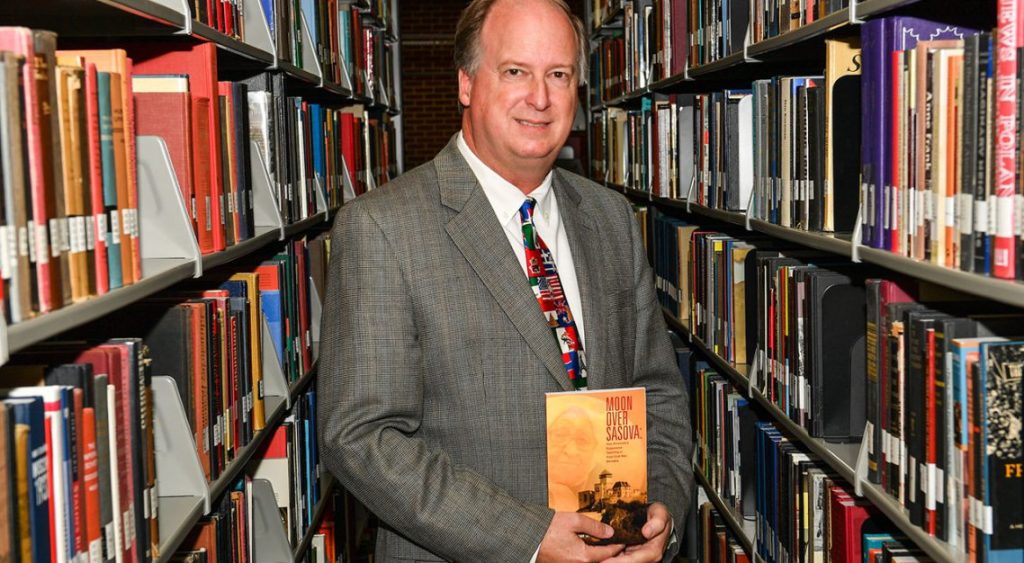 Troy University Troy University Dean of Libraries Christopher Shaffer and his new book, “Moon Over Sasova,” about his teaching experiences in Slovokia.

Dr. Chris Shaffer, dean of library services at Troy University, will sign copies of his book “Moon Over Sasova: One American’s Experience Teaching in Post-Cold War Slovakia” during a reception at the University’s International Arts Center at 5 p.m. on March 29.

The book documents his time teaching and traveling in post-communist Europe during the 1990s. To RSVP for the reception, call 334-670-3608 or email events@troy.edu.

Shaffer began the journey he highlights in “Moon Over Sasova” in Mannheim, Germany through a study abroad program at Auburn University in 1991. It was when Shaffer took a weekend trip to Prague that he would come across a sign inquiring for English teachers.

What Shaffer didn’t know was that the program was based in a place close to home: the University of South Alabama. The program was named Education for Democracy, and it was founded shortly after 1989’s Velvet Revolution ended communism in what was then Czechoslovakia.

“The goal was to send people over there to teach English because it hadn’t been approved of by the former government,” Shaffer said. “At the same time, it was to teach people that Americans were friendly and not threatening.”

Shaffer made it to Slovakia in 1993, two weeks after the Velvet Divorce, which broke up Czechoslovakia peacefully, and resulted in the creation of an independent Slovak state.

Shaffer’s book recounts his time in Banska Bystrica, Slovakia, which had been a medieval mining town in the 1300s, through the eyes of a 22-year-old American. The town itself was filled with remarkably well-preserved gothic architecture. He lived in a large suburb of Banska Bystrica called Sasova that was filled with identical blocs of flats that were a grim contrast to the beauty of the actual town itself.

Shaffer also used his time in Europe to travel to different countries such as Poland, Hungary, Austria, and Slovenia — trips he highlights in his book.

Shaffer recounts his time with other Americans, and also the lack of communication he had with his family back home. Just one phone call to his parents cost around $45, but little interference from the outside world proved itself a plus. Instead of calling, Shaffer and his family would write letters back and forth, letters that 28 years later would be an asset for Shaffer’s book.

“That was one of the ways I was able to recreate the experiences for the book,” Shaffer said. “I had letters that people would send me and, in some cases, they had saved theirs from me.”

Shaffer was able to work with other faculty members at Troy University to launch his book, including Graphic Arts professor Ed Noriega to design the cover, and Chair of English Dr. Kirk Curnutt to read and advise on the manuscript.