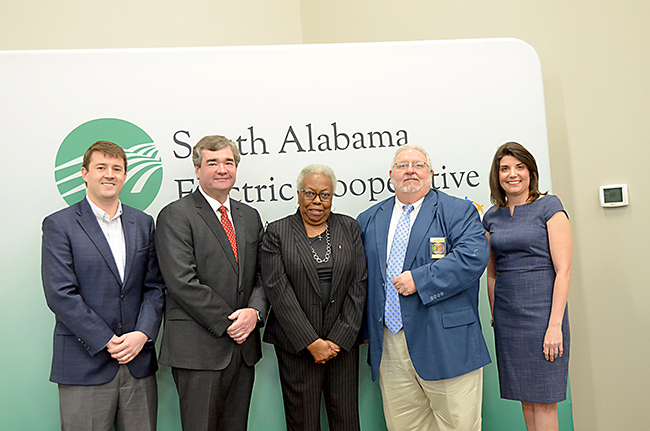 Boyd said Brundidge continues to move forward in making positive changes to ensure the health, safety and welfare of its citizens, as well as maintaining the stability of the city’s economic growth.

“The city is working hand-in-hand with several of our businesses in hopes of partnering with Main Street Alabama,” Boyd said. “This partnership will provide us with the opportunity to revitalize our city along the downtown area.

“Galloway Park is getting new playground equipment and basketball courts. We are also working toward securing funding for storm shelters in both the north and south areas of town.”

Boyd said the city is working with a $10 million budget to keep the city moving forward and in the right direction.

“We are positive and excited about the future of our city,” she said.

Reeves said the one thing, of which he is most proud, is the sense of working together that keeps Troy moving forward.

“By working together, we are able to accomplish more,” he said. “That is the bottom line.”

Reeves acknowledge that it’s the work of “great teams” that make progress possible.

He highlighted downtown development and said there will soon be “no open spaces around the square.”
The partnership with Troy University has been a catalyst in the growth of Troy’s downtown area, the mayor said.

“As we continue to move forward, it is important that no one is left behind,” Reeves said in regard to growing the northern area of the city. “We are dedicated to keeping our workforce engaged and excited about the future.”

Sullivan said the Pike County Commission sits at the table with a $5 million sales tax fund and a $400,000 lodge tax balance that provide a measure of financial security.

As the Pike County Economic Development President, Cobb works for the economic growth of all Pike County.

Cobb said Pike County is indeed blessed to continue to get “win after win” in economic and industrial growth.

“Pike County continues to grow even though growth is not an easy road,” he said. “At this time, Pike County has 651 available jobs. Anyone who wants a job should be able to get one.”

What is amazing about Pike County’s growth is that the growth is occurring against the odds.

“Starbucks’ coming here doesn’t make sense,” he said. “It goes against the demographics. It shouldn’t be here at all. But it’s here.”

And, other “bid deals” are just amazing and it’s all about leadership and about working together. Those factors are what makes good business sense and business growth, Cobb said and added, as Pike County continues to grow, so will the standard indicators of the quality of life.

“It all about economic development,” he said. “And, there is the misconception about what economic developers do and it does include recruitment and business but 80 percent is helping y’all every day.”

Cobb said the Pike County Chamber of Commerce is dedicated to helping its government partners, to workforce development, to getting people off 231 and to providing good career opportunities here in Pike County.

Sanders thanked everyone for attending the Business Over Breakfast event with special thanks to those who shared the business of Pike County.