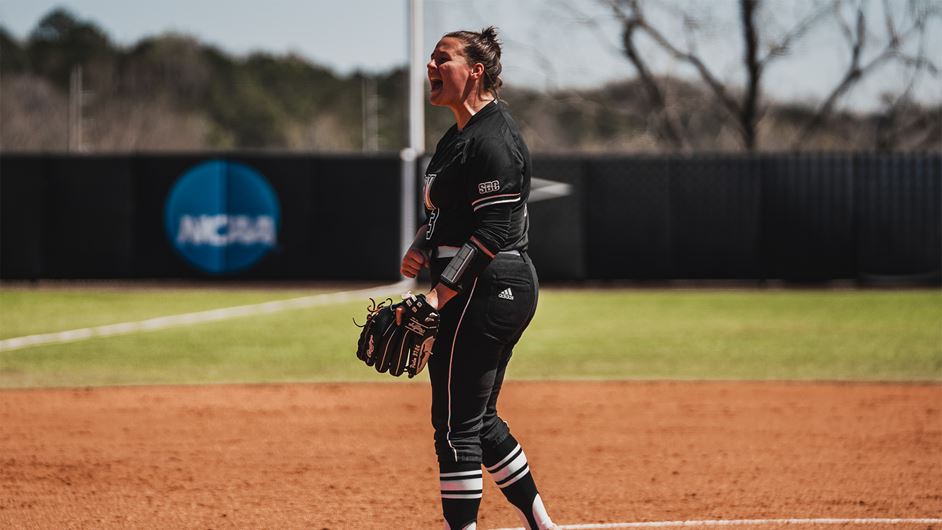 Libby Baker (3) closed out the series with a strong performance against ULM on Sunday. (Photo courtesy of Troy University Athletics)

The Troy Trojans softball team went 2-1 over the weekend in a series against Sun Belt Conference foe Louisiana-Monroe.

After falling 1-0 in the series opener on March 18, the Trojans evened the series with a 9-1 win on Saturday, March 19 when the Trojans launched four homers on the afternoon.

Kelly Horne, Jade Sinness, Candela Figueroa and Logan Calhoun all earned homers on the afternoon as Troy’s bats were on fire. Sinness went a perfect 3-for-3 at the plate with the homer, two RBIs, a double and two runs. Calhoun also went 3-for-4 with a home run, an RBI and three runs. Horne’s homer was also her 100th career RBI. The Tallahassee, Fla. junior is now just eight RBIs shy of cracking

Brantley’s Leanna Johnson was as dominant as ever in the circle, striking out 11 batters, while giving up just three hits and one earned run. Skipperville’s Libby Baker pitched one inning and struck out one batter, while giving up no hits or runs. Figueroa earned 12 putouts from her catcher position.

On Sunday, Troy wrapped up the series with a 6-4 win over ULM. Troy scored three runs in both the fourth and fifth innings before ULM managed its four runs in the sixth inning. That was as close as the Warhawks would come, however.

“I’m very proud of our fight this weekend,” Troy co-interim head coach Holly Ward said. “Coming back and winning the series was huge for us after falling short in game one. It was a great weekend for us overall, offensively and defensively.”

Baker led the way for Troy both at the plate and in the circle. She went 2-for-3 with a run at the plate, while also striking out eight batters in five and 2/3 innings pitched. She also gave up four hits and four earned runs. Johnson pitched one and 1/3 inning with three strikeouts and one hit allowed. Audra Thompson also went 2-for-2 at the plate with an RBI. Thompson also had five putouts defensively, while Katelynn de Leon had seven putouts with two assists.

The Trojans will now host the No. 2-ranked Florida State Seminoles on March 23 for a doubleheader starting at 3 p.m. Florida State marks the seventh Power 5 opponent of the season for Troy and the third opponent ranked in the Top 25.