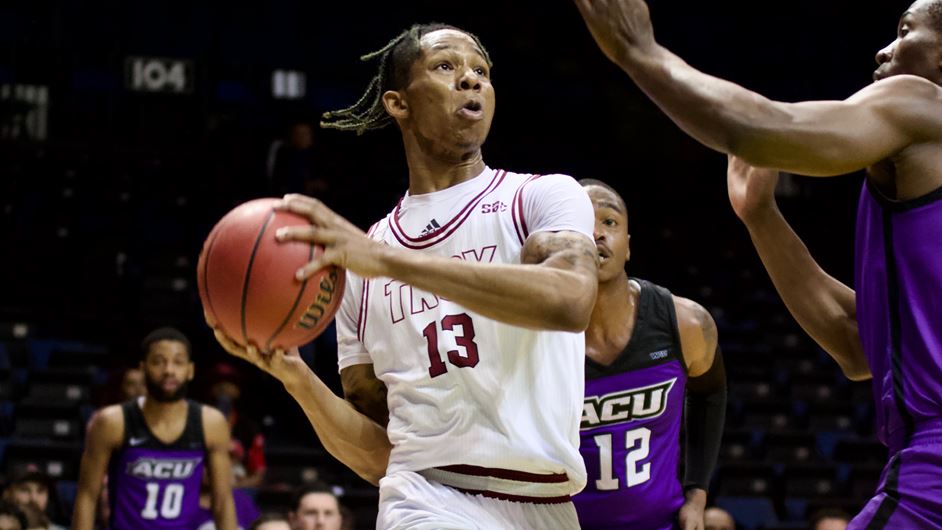 Khalyl Waters closed out his Troy career with 18 points in the CBI Tournament. (Photo courtesy of Troy University Athletics)

The 2022 basketball season came to a frustrating finish for the Troy Trojans with an 82-70 loss to Abilene Christian in the opening round of the men’s College Basketball Invitational (CBA) Tournament on March 20.

Troy traveled to Daytona Beach, Fla. to face off with Abilene Christian in the opening round matchup and trailed the Wildcats by as many as 22 points in the loss. After Abilene Christian went on a 14-0 run to end the first half, Troy trailed 48-27 at halftime.

Troy continued to fight in the second half and were finally able to chip the lead away to under 10 points with less than two minutes remaining. The lead was just too much for Troy to overcome, however, and Abilene Christian would eventually pull the lead back out to more than 10 points for the remainder of the contest.

“Basketball is a game of matchups and they were able to impose their will in their quickness and their ability to drive and shoot,” Troy coach Scott Cross said. “The only disappointing part is rebounding, but other than that, our guys fought, and they competed. It’s easy to fold the tent and quit when you are down 22 (points), but they kept playing, so I’m proud of them for that.”

Troy was outrebounded 33-32 in the loss. Senior Khalyl Waters ended his college career with an 18 point-point performance for Troy, while Desmond Williams scored 14 points and Christyon Eugene scored 13 points. All-Sun Belt performer Efe Odigie was held to just seven points in the loss but he also grabbed nine rebounds.