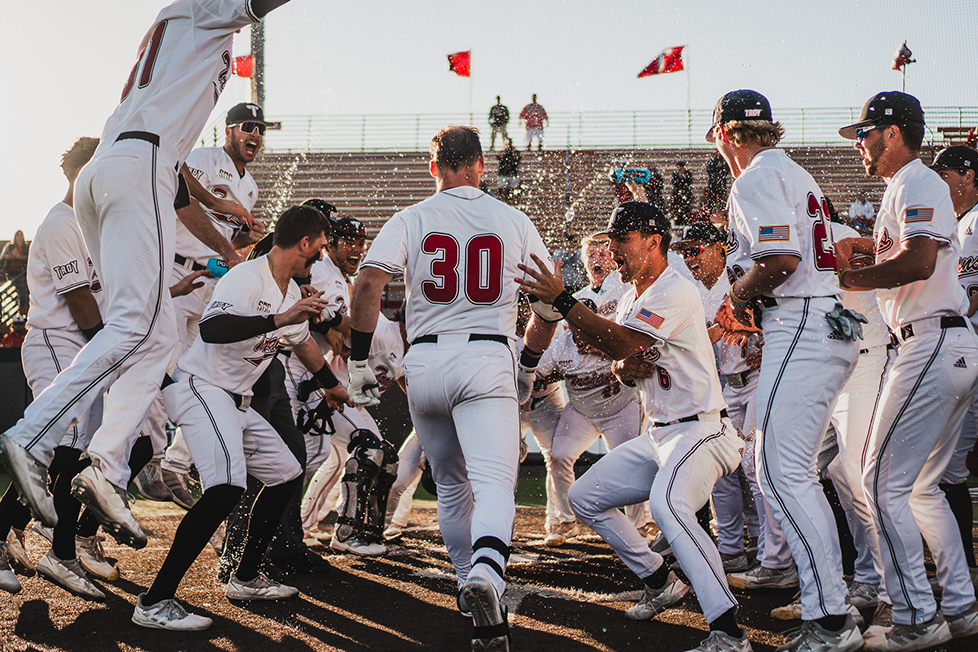 William Sullivan (30) is greeted at home plate after drilling a walk-off homer against Louisiana on Saturday. (Photo courtesy of Troy University Athletics)

Both the Troy Trojans baseball and softball teams enjoyed big home runs that helped them pick up wins over Louisiana schools at home on Saturday, March 19.

William Sullivan hit a walk-off homer in the bottom of the ninth inning to send the crowd at Riddle-Pace Field wild and guide the Troy baseball team over Louisiana by a score of 4-3 and notch the Trojans’ seventh win in a row. Sullivan’s first homer of the season was the third dinger in the final two innings for the Troy baseball squad. Seth Johnson and Trey Leonard also went yard in the win.

Leonard went 2-for-3 at the plate with a home run, one RBI and one run, while Easton Kirk went 2-for-4, as well. Brady Fuller pitched six and 1/3 innings with six strikeouts, while he also gave up five hits and three earned runs. Grayson Stewart stepped on the mound in the bottom of the eighth and threw just one pitch that led to a groundout. Sullivan also had 12 putouts from his first base position, while catcher Clay Stearns had six putouts and one assist.

That win came after picking up a 7-1 win on Friday. The Trojans will look to close out the sweep on Sunday as the two sides meet at 1 p.m.

The softball team also showed off the long ball in their 9-1 win over Louisiana-Monroe on Saturday when the Trojans launched four homers on the afternoon. Kelly Horne, Jade Sinness, Candela Figueroa and Logan Calhoun all earned homers on the afternoon as Troy’s bats were on fire. Sinness went a perfect 3-for-3 at the plate with the homer, two RBIs, a double and two runs. Calhoun also went 3-for-4 with a home run, an RBI and three runs. Horne’s homer was also her 100th career RBI. The Tallahassee, Fla. junior is now just eight RBIs shy of cracking the school’s Top 10 in career RBIs. 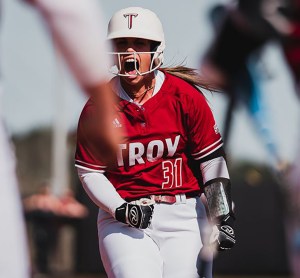 Brantley’s Leanna Johnson was as dominant as ever in the circle, striking out 11 batters, while giving up just three hits and one earned run. Skipperville’s Libby Baker pitched one inning and struck out one batter, while giving up no hits or runs. Figueroa earned 12 putouts from her catcher position.

The softball team was coming off a 1-0 loss to ULM on Friday and will look to win the series Sunday as the two sides meet at noon.