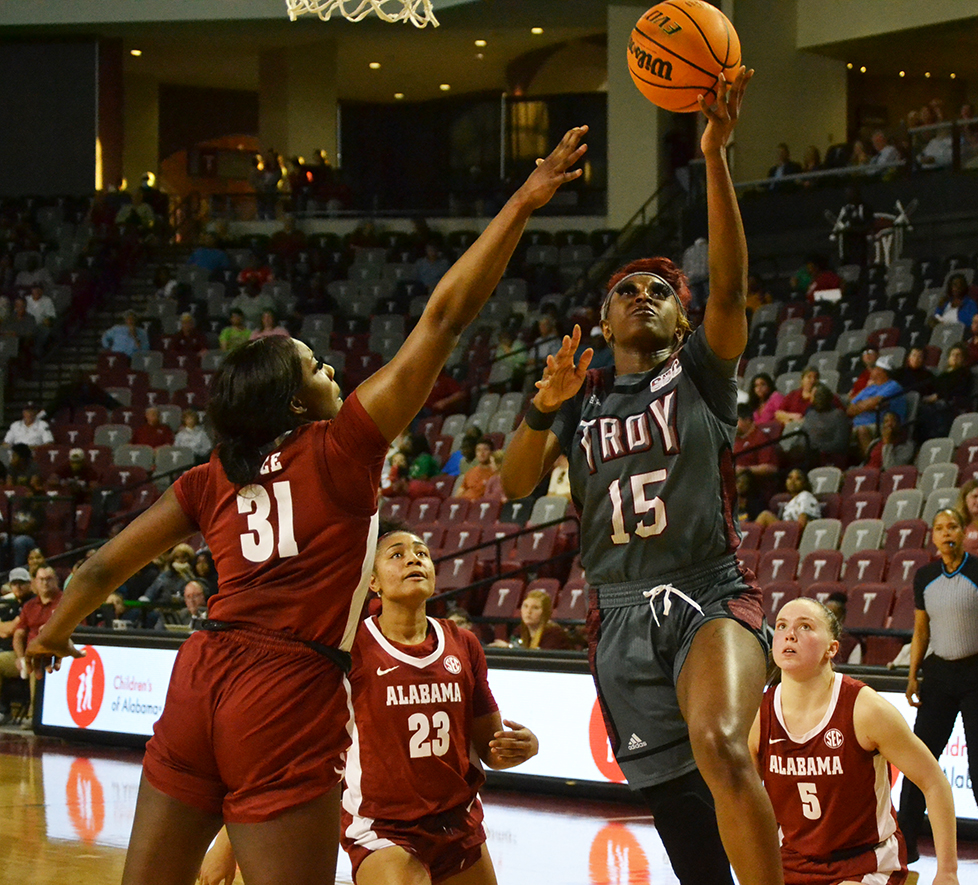 The Troy Trojans and Alabama Crimson Tide battled to the last second in the opening round of the Women’s National Invitational Tournament (WNIT) at Trojan Arena on Thursday night with the Tide coming out on top 82-79.

Troy trailed by as many as 12 points in the fourth quarter but the Trojans refused to stay down and clawed their way back into the game. After Tiyah Johnson knocked down a three-pointer late in the fourth, the Trojan coaching staff made the decision to put five guards in and amp up the full-court press.

Alabama’s Jamya Mingo-Young hit a jumper to extend the Tide lead to 80-77 with just 49 seconds left and was fouled but missed the “And-1” attempt. After a Troy turnover, Alabama missed a jumper attempt and Trojan junior Felmas Koranga raced down the court and knocked down a jumper in the lane with just 15 seconds left to cut the Alabama lead to 80-79.

“I’m really proud of my assistant coaches,” Troy coach Chanda Rigby said. “They made the decision to put five guards in there. Our post players had got us to that point but our guards came in and almost won it for us with their energy and determination.

“Coach (Jennifer) Graf said it in the locker room, they never seem to realize how many points they’re down. It’s just all about winning for Troy, so hats off to them. It’s a really special team and it’s not every day you get to coach a team like that.”

Alabama managed a pair of free throws with seven seconds left to stretch the lead out to 82-79. After a Troy timeout, Alabama pressured Trojan Sharonica Hartsfield on the inbounds and seemingly tackled the freshman guard but instead of calling a foul, the officials called a travel sealing the win for Alabama.

“I’m really proud of our team,” Rigby said. “Obviously, I wish this game would’ve gone the other way. I am so thankful for the crowd and all the Trojan National that came out tonight.

“We started out hot and were pressuring the ball well. The team kept up the tempo well. We outrebounded them, had more bench points and made more field goals. It came down to the free throws, but I am proud of the team. I just hate that it ended that way.” 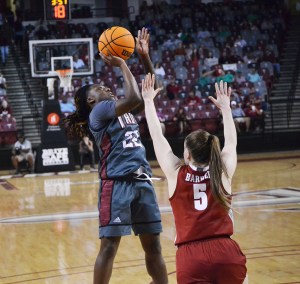 Troy was on fire in the first quarter and went on a 15-3 run at one point before Alabama ended the period on a 10-3 run to cut the Trojan lead to 22-19 going into the second quarter. Alabama took a 42-34 lead into halftime and led 59-52 going into the fourth quarter.

Troy outrebounded Alabama 53-41 but turned the ball over 19 times. Alabama was also 17-of-20 at the charity stripe, compared to just 6-of-10 for Troy.

Alabama now advances to play Tulane in New Orleans, LA on March 21 in the second round of the WNIT.