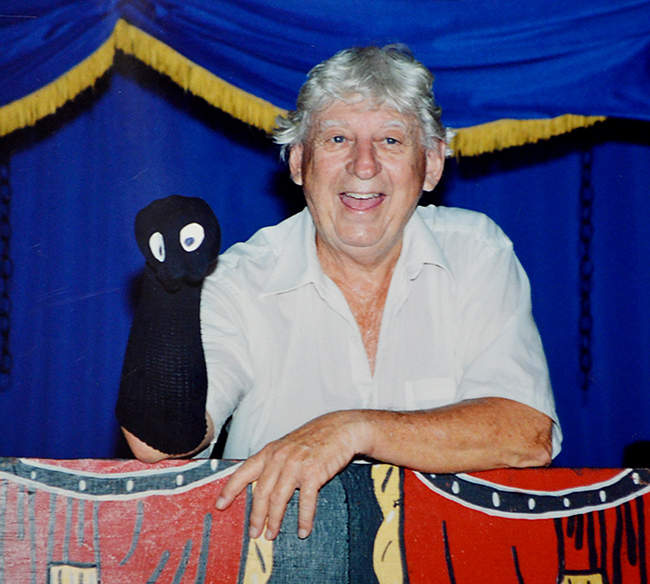 Jaine Treadwell | The Messenger Master puppeteer Gordon Bennett was part of the Circus Hall of Fame in St. Petersburg and the Sturbridge Village in Massachusetts. He brought his puppet “village” to Pike County around the turn of the century and brought joy to all those for whom he “pulled strings.” Bennett served in World War II. Friends learned recently that he died at the Veterans Home in Alexander City on September 24, 2021.

Often people come to Pike County, make a positive impact and then just seem to quietly walk away.

One of those was master puppeteer Gordon Bennett.

But, between the coming and going, Gordon Bennett positively “pulled strings” around the county.

Once he left Pike County, little was known of his whereabouts until after his death on September 24, 2021 at the Bill Nichols State Veterans Home in Alexander City at the age of 83.

Keith and Shirley Blankenship, longtime friends of the master puppeteer, said the last years of Bennett’s life were somewhat “confusing” but he fondly remembered the children of the Pike County area who brought him so much joy in their delight of his puppetry and his magical marionette shows.

“Not many children in today’s world, have the opportunity to experience the magic of puppets on a string,” Keith Blankenship said. “Gordon Bennett opened that world to them. Gordon had been gone from Pike County for a time but, I’m sure all those who enjoyed his puppet shows at his home theater, the pioneer museum, various ‘stages’ around the county and on cable television will remember the joy he brought to so many by bringing life to wooden puppets.”

Bennett made a name for himself in the world of “marionettes,” first from Springfield, Massachusetts to Hollywood, California and then to Pike County, Alabama.

Keith Blankenship said Bennett became interested in marionettes when, at only nine years old, he went to the marionette show, “Rip Van Winkle” at the Museum of Fine Arts in Springfield, Massachusetts.

The story he told was he was halfway back in the huge theater but, to him, the marionettes seemed bigger than life.

After the show, he went backstage to see the magical characters but was surprised to see the marionettes were only about a foot high and made of wood. He was sure that he could make wooden people on strings.

“Jack and the Beanstalk” was his first show. He made the puppets and his mother made the costumes as she continued to do far into his adulthood and until she was 97.  Young Gordon didn’t have a giant puppet for his “Jack and the Beanstalk, show so he painted his legs green and play the role of the towering giant.

Bennett moved from the East Coast to the West Coast and his Hollywood Puppet Theater attracted a celebrity crowd. He did a home show for Barry Gordy of Motown fame with the Jackson Five in attendance. Lucille Ball and Arlene Dahl brought their children to Bennett’s theater.

He was vice president of the Puppeteers of America when Jim Henson, creator of the Muppets, was president.

Just why it was that Gordon Bennett brought his puppet troupe to rural Pike County, he never really said. Only that he was ready to settle down and enjoy the quiet life.

Blankenship said Bennett setup a backyard ‘theater’ at his home near Monticello and another at the Pike Pioneer Museum.

“And, it was at those ‘theaters’ that Gordon Bennett shared life lessons with children and generated memories for the adults,” said Charlotte Gibson who was then the director of the Pike Pioneer Museum, now the Pioneer Museum of Alabama. “Beginning around the turn of the century, Gordon would come to the museum and set up a puppet theater at Christmastime. He and his puppets would entertain the children, and adults, with ‘The Night Before Christmas.’”

Gibson said Bennett’s puppet shows were not limited to those with Christmas themes.

His “King Neptune’s Court’ and “Circus on Strings” were very popular. He also took the opportunity of his puppetry to better education children on drug abuse, fire prevention, hospital care and other issues that affected children.

Gibson, who is director of the Children’s Hands on Museum in Tuscaloosa, said Bennett’s Marionette education shows presented valuable information in a fun and entertaining way and the stage shows were primarily for entertainment.

“Gordon often brought his puppets to Tuscaloosa and performed at the museum here,” she said.  His puppet shows were always well attended and enjoyed by adults as well as children.

“With his puppets, Gordon told stories through the performance art.  Every age was fascinated by Gordon Bennett and his wooden puppets.  With them and through them, Gordon created joy.”

Gibson said she remembers that Gordon Bennett often said that seeing the joy children got from his puppet show, “Makes my life joyful,” therefore the joy of his life was doubled.