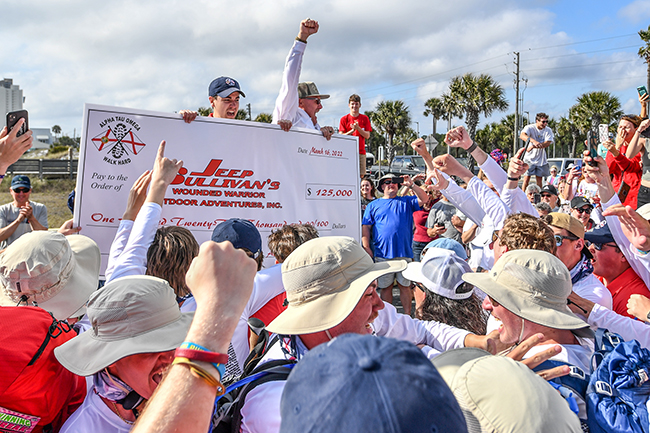 Last Friday, 36 fraternity brothers departed the university on a 128.3 mile trek from the quad to Panama City Beach’s Pier Park in an effort to raise money for Jeep Sullivan’s Wounded Warriors Outdoor Adventures. The road wasn’t easy, but the fraternity raised $125,000, a figure that eclipsed last year’s $100,000 record.

“It was hard  on our walkers this year,” 2022 Walk Hard Director Matthew Taylor said. “On Day 2 they had to walk in sleet and on Day 4 they had to walk in the Florida heat. On Day 5, we got them out early to try and beat the rain, but they had to walk in a torrential downpour most of the day. But, they were real troopers and honored their commitment to the fraternity and Jeep’s cause.”

Taylor said 34 walkers made it to Pie Park on Wednesday. The walker’s 128.3-mile route began at Troy University with overnight stops in Enterprise, Hartford and Bonifay, Vernon and Ebro, Florida. The fraternity’s goal for this year’s Walk Hard was $100,000, but the fraternity surpassed the goal by a wide margin, raising $125,000 for Sullivan’s Wounded Warriors charity.

“It was an honor for us to do this for our wounded veterans,” Taylor said. “The look on Jeep’s face showed how much this will mean for his cause. This money will go a long way to help veterans. Knowing what Jeep will be able to do with this money for the veterans, and see their gratitude and appreciation is overwhelming.”

Breaking six figures on the fundraising mission is something that is impressive, but also catapults the Troy chapter into another level nationally.

“I still can’t believe it,” said Gus McKenzie, an ATO alumnus who was Walk Hard 2019 director. “The work they put into this year’s walk is astronomically impressive.”

In what is essentially a nickel-a-dime, grassroots fundraising program with no big-ticket corporate donors, McKenzie, who’s Walk Hard team raised $67,000 in 2019, said a key was working with businesses in the area to generate additional support.

“This has always been about asking enough people to donate enough money to get the goal each year. It was really impressive to see how hard the 2022 team worked behind the scenes and how they got out and worked on businesses,” he said. “We all appreciate the business sponsors and Mark and Susan Anderson at Eagle Outfitters in Dothan really helped to lay the groundwork to show other businesses what they could do with Walk Hard. They played a critical role in our development.”

McKenzie said the achievement not only puts the Troy Chapter into a conversation with larger chapters at bigger universities but also shines a light onto the positive impact Greek organizations have in their communities.

“You can’t hide the hard work put in when your organization raises $125,000. It really shows the true nature of what most of the guys are doing with most of their time,” he said. “Just because you hear in the news about what a few members do with some of their time, something like this demonstrates the community service Greeks do and is indicative of a very healthy Greek system.”