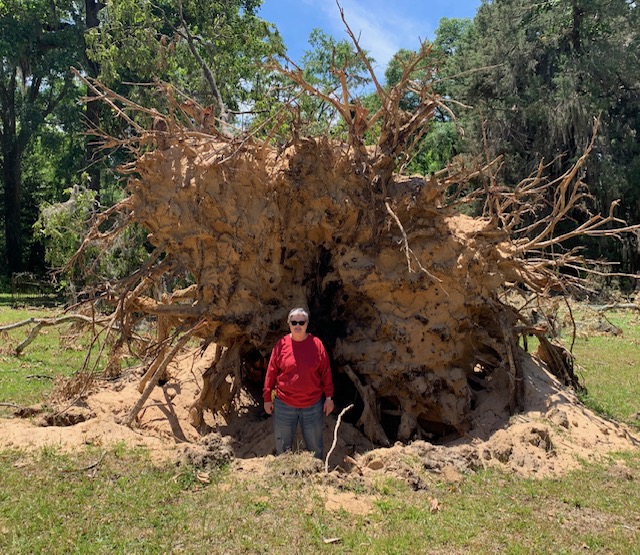 Contribtued Photo The removal of a mammoth oak in Beulah Cemetery that was topped by the strong storm in April 2020, has been completed. The tremendous hole the tree left behind was partially filled will chips from the oak that was estimated at 150 years old. Diane Smith, Pike County Historical Society president, is pictured standing in the hole the tree left behind.

In the month of April 2020, a storm played havoc in Troy’s Beulah Cemetery, toppling trees, downing huge limbs and scattering debris throughout the historic cemetery, the city’s oldest.

Dianne Smith, president of the Pike County Historical, Genealogical & Preservation Society, said, although much of the debris had been cleared, by the Beulah Cemetery Foundation, a felled huge oak, estimated at around 150 years, old still remained.

“The tree was so large that it was going to require special equipment, including a crane, to cut and remove the mammoth oak,” Smith said.

The coronavirus and finding a company with the necessary equipment halted the efforts to removal of the “cemetery” oak until recently.

There were several hurdles that first had to be jumped.

The Pike County Historical, Genealogical and Preservation applied for and received a $3,500 Chapman Foundation Grant.

“It was necessary to get permission from the Alabama Historical Commission to remove the tree because so of the tree over two cemetery plots and four graves,” Smith said. “We consulted Trey Earnest with the City of Troy to make sure that the removal of the tree would not be disruptive to any other graves.”

Pike Tree Service was challenged with the tree removal and it was not an easy process,

Smith said. “The hole the mammoth oak left was tremendous and had to be filled and packed. Pike Tree Service did outstanding work. One of the graves was damaged slightly in the removal and pieces of the wrought-iron fence were bent but nothing damage.”

Smith expressed appreciation to the Chapman Foundation for funding the project and to the Beulah Cemetery Foundation for its care of the historic cemetery, Pike Tree Service and all those involved in the cleanup efforts.

“Beulah Cemetery is interesting, historically, and there are so many stories about those who are buried there,” Smith said. “The oldest marked grave in Beulah Cemetery is Whitney Leroy Loe who died in 1847 at the age of one. Stories about Joel Winslett that have been handed down insist that, in 1860 he was buried sitting in her rocking chair.

The oldest marked grave in Beulah Cemetery is Whitney Leroy Loe who died in 1847 at the age of 1 year.  Stories about Joel Winslett handed down insist that, in 1860, he was buried sitting in his rocking chair in 1860.

Smith said two doctors, 32 Confederate soldiers and a soldier from the Indian Mexican War were laid to rest at Beulah Cemetery. John McIntosh was said to have been buried by torch light at Beulah.