The Charles Henderson High School baseball and softball teams both hosted home games on Monday, March 14, with the Trojans picking up a win and the Lady Trojans dropping a tough loss.

The baseball team (4-10) snapped a six-game losing streak on Monday by throttling Park Crossing 17-4. The Trojans accumulated 12 hits in just five innings, while CHHS pitchers allowed only three hits on the afternoon. Leading the way at the plate was Will Templin as he went 2-for-2 with two RBIs and two runs along with Benton Dunn, who went 2-for-2 with two RBIs and two runs. Tyler Martin scored three runs for the Trojans, while Damien Hart, Jywon Boyd and Cobie Cantlow scored two runs each. Brody Wilks, Jordan McBryde, Noah Prestwood, Kevin Yeoman and Brady Huner all scored a run. 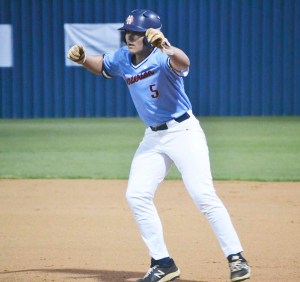 Will Templin (5) led the way for Charles Henderson at the plate against Park Crossing. (Photo by Josh Boutwell)

The softball team (11-7) fell to GW Long by a score of 9-7 after the Lady Rebels scored seven runs in the last two innings.

The Lady Trojans jumped out to a 1-0 lead in the first inning before falling behind 2-1 in the second inning. CHHS tied the score 2-2 in the third inning and retook the lead 3-2 in the fourth inning.

Neither team was able to score a run in the next two innings but then both exploded in the seventh inning. Long scored four runs in the top of the inning to take a 6-3 lead before Charles Henderson answered with three runs to tie the score 6-6 and force extra innings.

In the top of the eighth inning, Long scored three more runs to go up 9-7 and the Lady Trojans answered to cut the lead to 9-7 in the bottom of the inning but were unable to get back into scoring position as the Lady Rebels held on for the win.

Molly Garrett led Charles Henderson at the plate, going 3-for-4 with two doubles and a run, while Hannah Sparrow went 2-for-4 with three RBIs and one run. Heather Maxwell scored three runs for CHHS, while Madison Stewart and Madison Allen each scored a run. Maxwell also had two stolen bases. McKenzie Cain earned a triple and also stole a base. 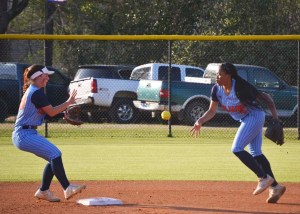 Madison Allen (4) flips the ball to Heather Maxwell (38) for an out. (Photo by Josh Boutwell)

Sparrow pitched three innings and struck out four batters, while giving up two hits and no earned runs, while Stella Gilbreath pitched five innings and fanned five batters. She also gave up five hits and three earned runs. The Lady Trojans had six errors defensively, while Allen, Gilbreath and Maxwell each earned a double play.

The softball team will is now off until facing off with Greenville on March 30.