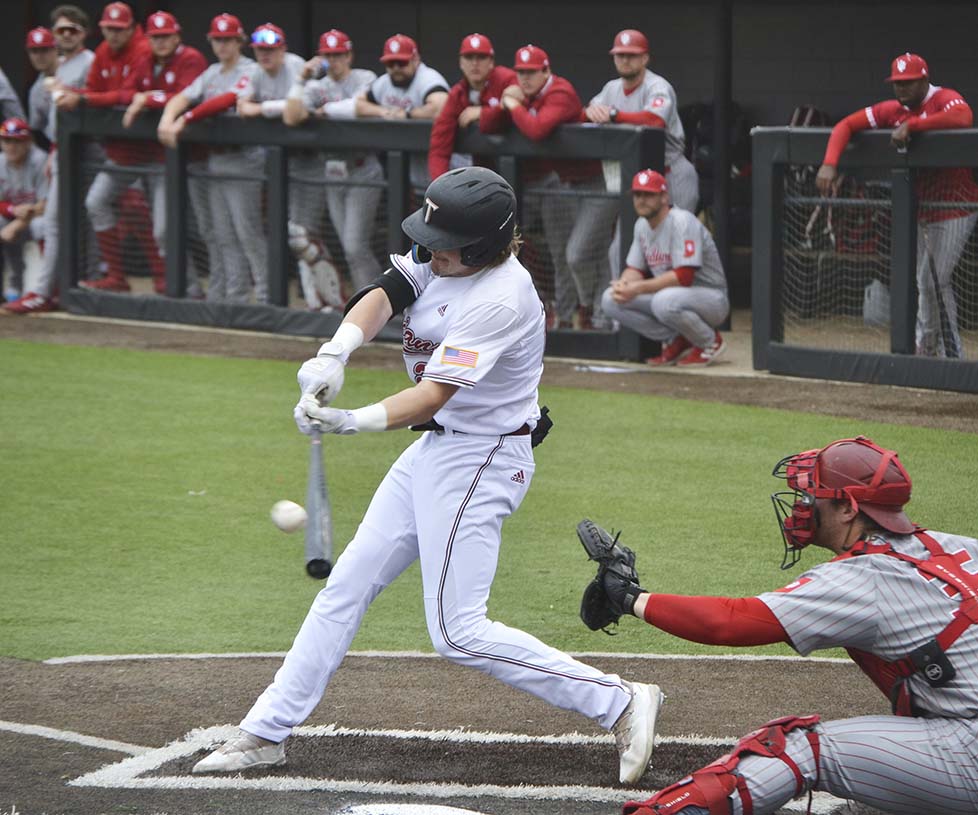 Rigsby Mosley (21) earns a hit against Indiana this past weekend. (Photo by Josh Boutwell)

Both the Troy Trojans baseball and softball teams won their series matchups this weekend with the baseball team sweeping Indiana at home and the softball squad besting Coastal Carolina on the road.

A dominating performance from pitcher Garrett Gainous on March 11 lifted the Trojans baseball team (11-5) past the Big 10’s Indiana Hoosiers by a score of 2-1 in the first of the three games.

Gainous mowed down nine batters and gave up just two hits with no runs in six innings on the mound. Dominant pitching on both sides led to a scoreless tie going into the sixth inning when the Trojans’ bats finally came alive. Catcher Clay Stearns drove home Rigsby Mosley and then Easton Kirk drove Seth Johnson home to give the Trojans a 2-0 lead. Indiana cut the lead to 2-1 in the top of the ninth inning but the Troy defense closed the game out to secure the win.

Troy also won game two 6-4 on March 13 as Jesse Hall went 3-for-4 with three RBIs and a run, while Brady Fuller pitched five innings and struck out three batters. He also gave up five hits and three earned runs on the mound.

Later in the day, Indiana jumped out to a 3-0 lead in the top of the first inning of game three but the Trojans came roaring back to take a 4-3 lead in the bottom of the first. Indiana tied the score 4-4 in the third inning with a home run, but the Trojans scored a run in the seventh and two more in the eight inning to secure the 7-4 win.

Kyle Mock went 2-for-4 with three RBIs for the Trojans, while Ryan Pettys pitched three innings and fanned five batters, while giving up one hit and no runs.

The baseball team will host Samford on March 15 and then Louisiana this weekend for a series. 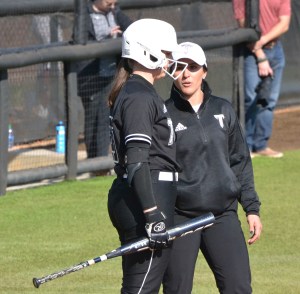 Taylor Smartt and her Trojan softball team defeated Coastal Carolina in a road series this past weekend. (Photo by Josh Boutwell)

The softball team (15-6) traveled to Coastal Carolina this weekend and started off its weekend series on March 11 with a 5-2 win over the Chanticleers, guided by three home runs on the day. Taylor McKinney, Libby Baker and Jade Sinness each went yard in the win. With the game tied 2-2 going into the seventh inning, Sinness hit her dinger to start off the inning and gave Troy a 3-2 lead and then Baker drilled a two-run homer to seal the win.

Baker went 3-for-4 at the plate with the home run, two RBIs and a run, while McKinney went 2-for-4 with a homer, one RBI and one run. Brantley’s Leanna Johnson pitched all seven innings and mowed down 10 batters, while giving up four hits and two earned runs.

Troy split a doubleheader with Coastal Carolina on March 12 meaning the Trojans won the series 2-1 but couldn’t complete the sweep.

Coastal wiped out Troy’s thoughts of a sweep in game three coming away with a 4-3 win after scoring three runs in the bottom of the sixth inning.

Troy earned just four hits as a team in the loss but Kelly Horne earned a home run with her lone hit. Baker pitched six innings and fanned seven batters, while giving up six hits and four earned runs.

Troy will traveled to North Carolina State on March 15 before hosting Louisiana-Monroe for a series this weekend.